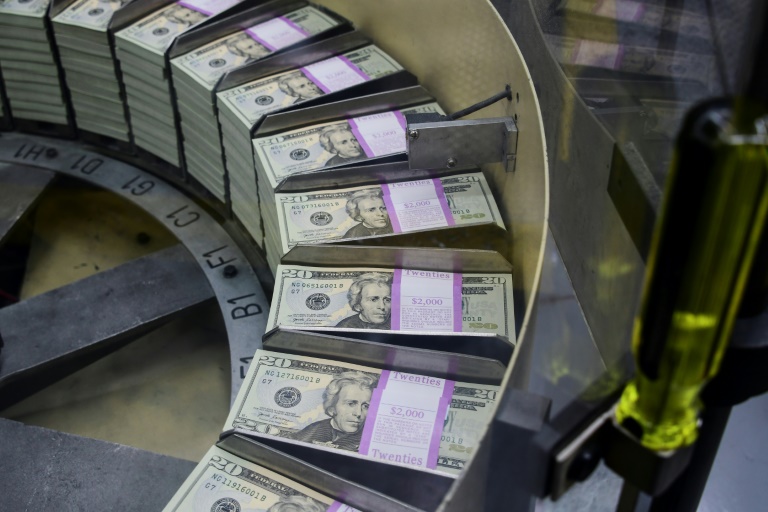 Trump promised to supercharge growth and claimed the tax cuts would pay for themselves. (Photo: AFP)

President Donald Trump likes to take credit for the US economy, with historic low unemployment and few signs of rising prices, but his promises that surging growth would pay for massive tax cuts are falling flat.

After an initial bounce in 2018 and in the first three months of 2019, the economy is expected to slow this year. And the US budget deficit is steadily widening, the yawning gap edging closer to $1 trillion after trending downward from its peak in 2009 during the worst of the global financial crisis.

Trump promised to supercharge growth to three percent or higher, and claimed the tax cuts would pay for themselves by spurring investment and employment, which in turn would generate higher tax revenue.

In fact, July will mark the longest economic expansion in US history, with continual growth since mid-2009. With a healthy economy, it is the ideal time for governments to shore up their finances and reduce debt, saving up for the next rainy day.

But forecasts call for slower growth into next year -- with some economists even fearing a recession -- and last month the federal deficit hit a new record for May of $208 billion, a 42 percent increase from a year earlier.

Just eight months into the fiscal year which ends in September, the deficit is nearly as big as all of 2018, swelling to $739 billion, $206 billion higher than the same period of last year.

Even the billions in tariffs taken in during Trump's multi-country trade wars have not helped, since most of the funds taken in have gone back out to aid farmers hurt by retaliation from China and others.

At the same time government debt is expanding, and now is larger than the country's annual economic output at more than $22 trillion.

Normally this should leave Trump open to attacks from political opponents, but the Democratic party is on the horns of a dilemma: the progressive wing of the party, including many of the two dozen presidential candidates, favor massive spending programs.

With interest rates still very low, the adherents to "modern monetary theory" believe the government can continue to borrow to finance programs without negative consequences.

Critics dismiss the theory, known as MMT, saying it is akin to supply side economics espoused by Republicans in the 1980s, which argued that tax cuts would pay for themselves through higher economic output.

The last time the United States posted a budget surplus was during the economic boom under Democratic President Bill Clinton in 1999 and 2000, when Congress was controlled by Republicans.

Then the Iraq war started under former President George W. Bush in 2003, followed by the response to the housing crash and financial crisis of 2008, pushed government finances back into the red.

Even with a steady, albeit slow, economic recovery for the past 10 years, the US economy is coping with an aging population, which has pressured government finances due to the higher rising health and retirement costs.

Spending on Medicare alone -- the health insurance for retirees -- soared by $100 billion so far this year.

And while government revenues grew a modest two percent from October to May, total outlays jumped nine percent.

Since the beginning of the fiscal year, punitive tariffs on imports from China and other countries have brought in an additional $21 billion to the US coffers.

But the Trump administration last year earmarked $12 billion in aid to farmers hurt by Chinese retaliation, and another $16 billion this year.

And while Trump continues to claim that the duties are paid by China, they in fact act as a tax on American businesses and consumers, which reduce profits and have started to drive up some prices.