In a crystallizing moment at the last presidential debate, Donald Trump and Joe Biden fielded a question about people of color who live alongside chemical plants and oil refineries that seem to be making them sick. 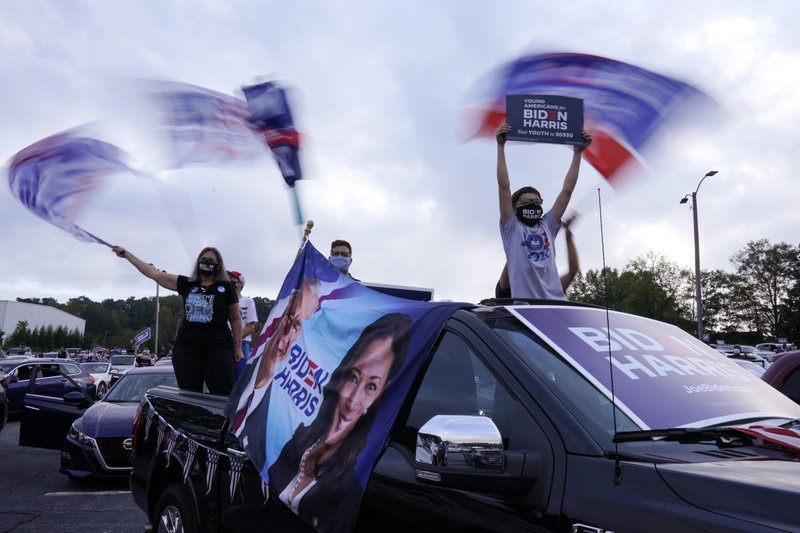 As is his way, Biden responded with I've-been-there empathy. He recalled growing up so close to Delaware refineries that when his mom drove him to school in a morning frost, the wipers spread an oil slick on the windshield.

Trump responded in his own way, too. "The families that we're talking about are employed heavily and they are making a lot of money," he presumed. "More money than they've ever made ... tremendous money."

These men were true to form, authentic in that exchange. On debate night and through the campaign they offered voters a distinct choice between a red-hot president who put the bottom line before all else and an unflashy Democrat who invited Americans to cool down and come together.

Biden promised straight talk and sobriety on the lethal pandemic, respect for the facts (if you don't count his flubs), aspirations for racial justice and a revival of the verities of American democracy that Democrats said Trump was tearing apart.

And the nation pivoted, embracing at least the chance of reconciliation in this deeply riven country. Will Americans accept the olive branch Biden extends? The election was far from a comprehensive repudiation of the polarizing president.

While Biden drew the most votes of any presidential candidate in history, Trump drew the second most ever — each over 70 million and some 4 million votes apart. Biden's victory Saturday, when Pennsylvania sealed his Electoral College win, had Trump crying foul, refusing to concede and feeding the false sense among his supporters that he was cheated by a corrupted vote.

After nearly five decades in public office, Biden was never going to be the most energizing candidate in the field. He had no pithy slogan like "Hope and Change" to rouse excitement. Audacity isn't his thing, man.

Rather, he tapped a majority's desire to stop the noise, to reject the bleating on Twitter, to turn the page from a period marked by confrontation, division and chaos, often driven by the White House itself. "Let this grim era of demonization in America begin to end, here and now," he told his excited crowd, and the country, in his victory speech Saturday night.

The Trump years had all been too much for lifelong Republican Edward Drnach, 61, of Ellicott City, Maryland, who voted for a Democratic president for the first time.

"I've just had it," Drnach said of Trump. "Whether he says something stupid, or whether he breaks ties with an ally, or whether he kisses up to a dictator, I've had it, and the whole boatload of things that come along with him, his whole family, etcetera."

"It's kind of like a train wreck that you can't look away from," she said. "Then you realize you're not watching the train wreck. You're on the damn train."

At least some of Biden's victory was driven by an animus toward Trump that was far greater than the rejection of Jimmy Carter or George H.W. Bush, the only two other elected incumbents to lose since Herbert Hoover in the Depression. It was great enough that the left swallowed its disappointment at their party's choice of a conventional candidate and swung behind him.

From the start, if anyone can remember a start, Biden and running mate Kamala Harris clutched their consistent lead in opinion polls like a precious vase, wary of moving too much lest it slip and shatter.

Campaigning in the midst of a pandemic, they stayed studiously distanced. Like a throwback to the age of drive-in movies, people gathered in and on their cars in fields and parking lots to hear Democrats speak, honking their horns in approval.

When Trump viewed the Democratic events, he didn't see a respect for public guidelines; he saw only sparse crowds. His own events, often in states suffering heavy virus infections in the closing days of the campaign, drew thousands, standing shoulder-to-shoulder. They came to see the leader who contracted COVID-19, seemed to shrug it off, then danced for his cheering, spottily masked throngs.

Such passions spread across the vast American landscape in an explosion of banners on small-town lawns and farmers' fields — geographically, at least, this was still Trump country.

But signs, rallies and red ballcaps are not votes. Americans ousted Trump with the quiet passion of their ballots.

For all of that, Trump country endures beyond the man himself in ways that cannot simply be snapped back, culturally, politically or between neighbors.

Biden will take over with an entrenched conservative majority on the Supreme Court and a federal judiciary reshaped with Trump's lifetime appointments. He inherits immigration barriers that were fashioned both from policy and from the steel beams that form Trump's imposing if very unfinished border wall. Biden prepares to assume office in a pandemic that won't turn on a dime simply because he takes it seriously and doesn't scorn the experts.

Trump also gave voice to a large, aggrieved minority simmering with resentments of their own, often over a government they feel has left them behind. These resentments don't vanish overnight.

They may only be exacerbated by the defeat of the leader who seemed to have the back of those who had elected him four years ago — the leader who wielded lock-'em-up aggression as a means of getting what you want.

"Joe Biden is a good man who wants the best for everyone in this country," said Gabriella Cochrane, a 54-year-old corporate recruiter in Virginia Beach, Virginia, who voted for him. "Not the richest. Not the whitest. For everyone. His soothing presence is what this country needs right now."

Whatever hurdles Biden faces with Congress, prepare yourself for a change of style that will also come with a change of substance, at least in areas where a new president can flip a switch.

The rollback of environmental regulation from the White House is over. Hello again, Paris climate accord. Mask-wearing will be encouraged from the bully pulpit, never ridiculed. Goodbye to the White House tweet tsunami — more than 22,000 of them from Trump since he took office.

Biden's ego is as substantial as any normal politician's and his way of deflecting attention to others is not a unique grace in politics. His way only stands out because the common graces vanished so thoroughly in the Trump era. In a Quinnipiac poll not long before the election, strong majorities said Biden has a sense of decency and Trump does not.

The Democrat comes to office with the support of scores of Republicans who served as national security officials, U.S. attorneys, governors and lawmakers, part of a larger pool of ordinary Americans who also traditionally vote for Republican presidents but this time didn't.

That pivot does not signal smooth sailing in Washington, however, where the toxicity writ large in the country promises epic showdowns across the range of policy — taxes, immigration, trade, foreign affairs and more.

Biden's broad coalition of college graduates, women, urban and suburban voters, young people and Black Americans prevailed over Trump's core  of white voters without a college degree, rural voters and religious conservatives, according to AP VoteCast, a nationwide survey of the electorate. Both sides went into the fight entrenched — about three-quarters said they knew all along which candidate they backed.

Then there is the pandemic, which has upended so much of American life and may have ultimately cost Trump the presidency. The election exposed how close to home the crisis has come: About 1 in 5 voters said a close friend or family member died from the virus and roughly 2 in 5 said their household lost a job or income because of it, AP VoteCast found.

He closed out the campaign exasperated by all the attention still being paid to "COVID, COVID, COVID" as the virus rages, hospitals in hotspots strain to accommodate the sick and the death toll has surpassed 236,000.

Biden brings a different approach to the crisis simply by acknowledging its severity, pledging to be guided by the public-health authorities and promising that Americans at long last will hear the truth about it from the White House.

He has not laid out a plan of federal action that is markedly different from what the country has seen. Still, more than 4 in 10 voters named the pandemic as their dominant issue, more than were motivated primarily by the economy, Trump's strong point in public opinion.

The man dubbed Sleepy Joe by Trump may represent a cure for another kind of condition — Trump fatigue.

So hopes Carla Dundes, a retired professional oboist who got so tired of Trump tooting his own horn.

So tired of obsessively following the political news, the virus infection numbers, the polls, the latest count of received mail-in ballots on her county's website from her home in the Pittsburgh suburb of Mount Lebanon. She's sick of only feeling centered when she's behind her Steinway piano, her instrument of choice these days.

Starring at an Orlando, Florida, drive-in rally late in the campaign, Barack Obama paid an odd compliment to his former vice president and Harris. He said they are people you can ignore for days at a time.