Americans rush to stores amid pandemic for last-minute Christmas shopping

WASHINGTON, Dec. 25 (Xinhua) -- Despite recent COVID-19 spikes, Americans rushed into stores to make last-minute purchases before Christmas, as shipping delays prompted concerns that gifts or holiday items might not arrive in time. 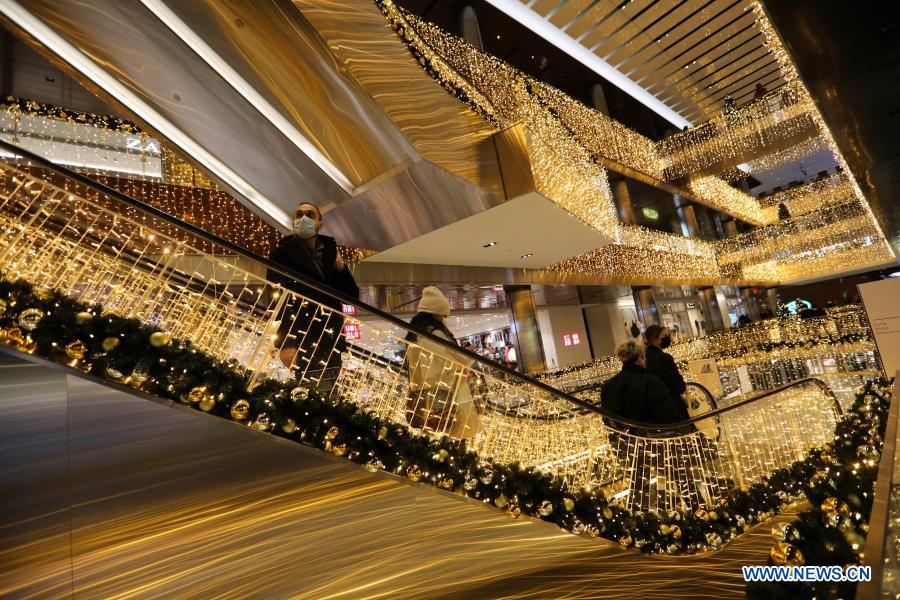 At a Bloomingdale's department store in Virginia Thursday afternoon -- just a few hours before Christmas Eve -- parking spots were hard to come by, and shoppers queued up to enter luxury brand stores such as Gucci, Louis Vuitton and Moncler.

COVID-19 concerns have been accelerating the shift to online buying, as data shows that online retail sales have risen remarkably during the holiday season, which officially kicked off on "Black Friday," about a month ago.

However, with massive shipping backlogs, procrastinating shoppers had to turn to in-store shopping, or try curbside pickup ahead of Christmas, so as to avoid the embarrassment of late arrival.

Over 1 million holiday orders are not likely to make it to their destination on Christmas Day, according to the estimation from ShipMatrix, a software company that helps retailers and others track shipments.

"Shipping delays have been an issue this year, which is resulting in consumers shifting from online to in-store to make their last-minute purchases," said the International Council of Shopping Centers.

The rush to the mall could bode well for retailers, as shoppers are more likely to make impulse purchases when shopping in store, which could boost sales. Additionally, in-person purchases could mean lower delivery expenses for retailers.

Meanwhile, more in-store shopping might raise eyebrows among public health officials and experts. The U.S. Centers for Disease Control and Prevention (CDC) has said that holiday shopping in crowded stores is a higher risk activity and that people should limit any in-person shopping.

To reduce the risk of infection, most stores are operating at limited capacity, with hand sanitizers available and masks required for entrance. Despite such precautionary measures, some shoppers are still worried about getting infected, and have gone for other options.

"The big thing retailers have added, and maybe this is what is new, is many retailers have now the option to order online but you can pick up at the retail store or curbside," David Reibstein, a marketing professor from Wharton School at the University of Pennsylvania, told Xinhua.

"This serves both the procrastinators, myself included, and those worried about shipping delays with an alternative. It brings the store to the customer with close to instant delivery in COVID safe manner," said Reibstein.

Retailers are adapting to new customer behaviors. Target Corp., which has seen e-commerce sales surge during the pandemic, allowed shoppers to order as late as Thursday afternoon for curbside pickup or same-day delivery.

More shoppers are ordering items online and opting to pick them up curbside or at retailers' stores, which has contributed to an increase in e-commerce sales, according to a recent report by CNBC.

Adobe Analytics, which tracks 80 percent of online transactions at 100 of the largest retailers in the United States, reported that online sales were up 29.8 percent on this year's Super Saturday, the final Saturday before Christmas.

This increase, however, accounts for "only a small part" of the holiday shopping done in brick-and-mortar stores in ordinary times, Lars Perner, assistant professor of clinical marketing at the University of Southern California's Marshall School of Business, told Xinhua.

According to data from RetailNext, shopper traffic to stores on Super Saturday dropped 40.9 percent from a year ago. Noting that brick-and-mortar sales are significantly down in various locations, Perner said this suggests "a large overall decline" in sales.

Perner also noted that the pandemic has hit different households economies very differently, and some households who have the same income as before might go on a "sympathy strike" of sorts where they refrained from spending in solidarity with those were suffering, as happened during past recessions.

Reibstein added that retailers have been successful in elongating the holiday shopping with early sales and the extension of "Black Friday."

Looking ahead, shopping will continue into the new year, and two-thirds (66 percent) of holiday shoppers will likely shop in the week immediately following Christmas, according to a survey recently released by the National Retail Federation and Prosper Insights & Analytics.

The top reasons consumers plan to shop during the last week of December are to take advantage of post-holiday sales and promotions (45 percent) and use gift cards (27 percent), the survey showed.

U.S. Congress approved a 900-billion-U.S.-dollar COVID-19 relief package earlier this week, which includes another round of direct payments for individuals and federal unemployment benefits -- both at reduced levels -- among other measures.

Analysts said that the promise of more aid could spark some additional last minute holiday spending, but President Donald Trump has lashed out at lawmakers over the long-awaited relief package, and threatened not to sign the bill if changes are not made, throwing the bipartisan relief bill in doubt.