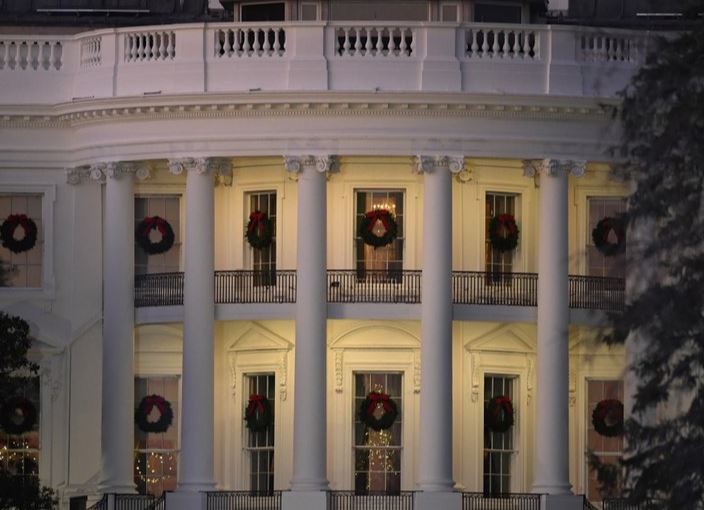 A view of the south side of the White House in Washington decorated for Christmas. (Photo: AP)

At home and in their own lives, Americans by and large have an upbeat view of the year to come. When it comes to how the country will fare in 2020, well, that’s another matter.

A new poll released Friday by The Associated Press-NORC Center for Public Affairs Research finds that close to 4 in 10 Americans expect a better year ahead for them personally, while another half expect things to stay about the same. Only about 1 in 10 expect a downturn in their own lives in 2020.

America’s mood takes a darker turn when it comes to the year ahead for the country overall, with about 4 in 10 saying the way things are going nationwide will get worse. Only about 3 in 10 think things will get better for America overall in the next 12 months.

“It’s going to be fine for me. I’ll always be fine no matter what happens, I’m that kind of person,” said Leslie Schulgren, a 75-year-old Democrat and retired science teacher in Atlanta. But, she added, “this particular year, 2020, is not going to be pretty — there’s going to be too much fighting.”

2020 is an election year, and, perhaps not unexpectedly, that might have something to do with it: Most Democrats and Republicans alike say they’re dissatisfied with the state of politics.

“Everybody is Republican or Democrat, and there’s less in between,” said Caleb Jud, a 29-year-old customer service representative in Cincinnati. Jud is a left-leaning independent who supports Democratic presidential hopeful Sen. Bernie Sanders of Vermont, and he is optimistic that the old way of politics is at a breaking point.

“They’ve been saying for years that the middle class is shrinking, but it’s starting to seem now that it’s not just a buzzword,” Jud said.

Roberta Hunt, a 78-year-old Republican in Santa Ana, California, is also frustrated by partisanship. “It’d be fine if we could eliminate the Democrats,” she said of the political system.

Hunt and her husband still have to work to support themselves, and she’s not optimistic that their situation will improve. But she does think the country is on the right track — “there’s less poverty, more people at work.”

The poll also finds that few Americans are confident that the government will make progress this year on the issues they care about, with pocketbook and health care-related issues topping the country’s to-do list.

Asked to name their top five priorities for government action in 2020, rather than picking from a list, about 6 in 10 Americans identified economic issues — including jobs and unemployment, the federal budget and trade. Half said health care. While Democrats and Republicans were about as likely to want a focus on at least one economic issue, 15% of Republicans identified trade specifically as a priority, compared with just 5% of Democrats. Democrats were more likely than Republicans to name issues related to health care.

Hunt sees homelessness and government limiting its own role as top priorities, but she doubts there will be official progress on either. To fix homelessness, a particularly acute problem in Southern California, will require more action by both the private sector and individuals, Hunt said.

The share of Americans mentioning issues related to immigration declined from a year ago. About a third now name immigration-related issues, including more Republicans than Democrats, compared with about half heading into 2019.

The poll was conducted before President Donald Trump ordered the Jan. 2 airstrike that killed Iranian Revolutionary Guard Gen. Qassem Soleimani. Even so, about 3 in 10 Americans named foreign policy concerns other than immigration among the top issues facing the nation, including those related to national security, US involvement overseas and specific adversaries, such as China and Russia.

Even some who identified domestic concerns brought a tinge of foreign affairs to their issues. Jing Zhou, a naturalized citizen from China and an auto engineer in Rochester Hills, Michigan, identified education as a top priority. “I want to see my son, who is American now, compete better than his counterpart in China,” Zhou said.

The 45-year-old is concerned, however, that divisions in the political system will prevent progress. “It’s good to have a difference of opinion, but opinions are too wide apart,” Zhou said. “There’s almost no way to come to a middle ground.”

The poll found that the country is about evenly split on whether its best days are ahead of it or behind it. Zhou said there’s no question America’s role as the world’s lone superpower is diminishing, but he still believes the future will be bright.

In Cincinnati, Jud, the customer service representative, came to a similar conclusion. “If you look at the best days of the US being No. 1 on the world stage, those days are coming to an end,” Jud said. “But I feel that, overall, things will be better.”