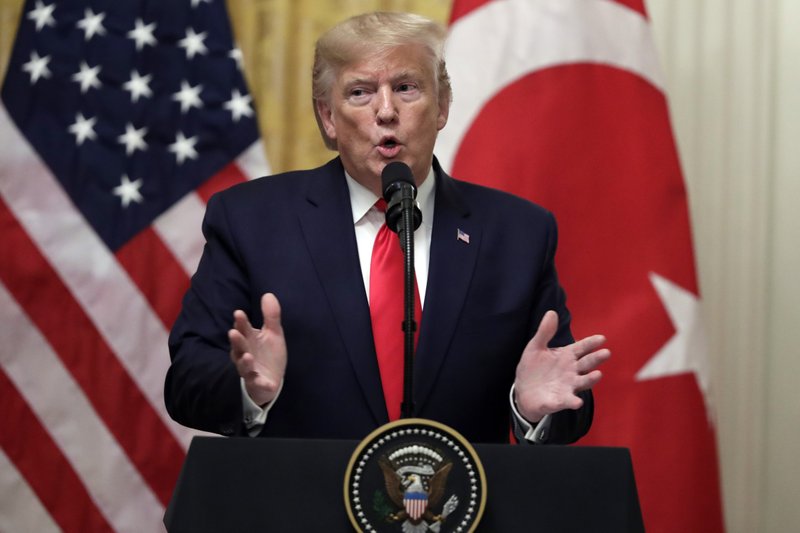 US President Donald Trump speaks during a news conference with Turkish President Recep Tayyip Erdogan in the East Room of the White House in Washington, November 13, 2019. In a sharply divided country, a new poll finds some things Americans can agree on. There’s widespread consensus on the importance of factual information being transparent and based in data, and Democrats and Republicans alike frequently find the current information environment challenging. (Photo: AP)

In a sharply divided country, here’s something many Americans agree on: It’s hard to know what’s a true and honest fact.

A new poll from The Associated Press-NORC Center for Public Affairs Research and USAFacts finds that regardless of political belief, many Americans say they have a hard time figuring out if information is true. Nearly two-thirds of Americans say they often come across one-sided information and about 6 in 10 say they regularly see conflicting reports about the same set of facts from different sources.

“It is difficult to get facts. You have to read between the lines. You have to have a lot of common sense,” said Leah Williams, 29, of Modesto, California. A Republican, Williams says she relies on like-minded friends and family to help sort through conflicting information. “There are wolves in sheep’s clothing everywhere.”

The poll found that 47% of Americans believe it’s difficult to know if the information they encounter is true, compared with 31% who find it easy to do so. When deciding whether something is factual, there is widespread consensus on the importance of transparency in how the information was gathered and if it is based on data. Democrats and Republicans alike frequently find the process challenging.

But as a president with a history of making false statements and repeating debunked conspiracy theories faces public hearings this week in only the fourth impeachment inquiry in the nation’s history, the poll finds that differing political beliefs led Americans down different paths as they try to determine what’s a unquestionable fact.

“When I hear him on Fox News — that’s where I get all my information,” said Al Corra, a 48-year-old Republican from Midland, Texas. Trump, he said, is the easiest way to cut through an otherwise confusing information environment.

Republicans are more likely than Democrats to put a great deal of trust in the president’s statements, 40% to 5%. Overall, a majority of Americans (61%) have little to no trust in information about the government when it comes from Trump,

Corra said he distrusts academics as too “liberal” and he’s not alone in that regard among Republicans. More Democrats than Republicans say they consider something to be factual if it’s been verified by scientists — 72% versus 40% — as well as academics — 57% versus 30%.

Scott Austin, a Democrat from Aurora, Colorado, says he generally trusts scientists, but checks their affiliations carefully because he believes fraudulent information abounds. “If I see something that some scientist from Stanford says, I’ll believe that because it’s Stanford,” he said.

Austin, a 52-year-old Army veteran, says he has to ping-pong from website to website to try to verify facts and has found himself increasingly skeptical of government information. Like 54% of Americans, he believes the president has a lot of sway over the information distributed by the government, and that’s made him increasingly skeptical given his lack of trust in what Trump says to be true.

“I never had a problem trusting the government under Democratic or Republican administrations — until this administration,” Austin said.

Close to half of Americans — 45% — also think members of Congress have a lot of influence on information that comes from the government, while just 3 in 10 say the same of federal agency employees.

When it comes to assessing whether information is factual, at least three-quarters of Americans think it’s very important for it to be accurate, and that sources provide all relevant information and explain the way that information was gathered. Smaller majorities say the information should include opposing viewpoints and be devoid of opinion.

About 6 in 10 say they are very likely to consider information factual if it is based on data.

And yet, poll found widespread skepticism about these sources — majorities say they have little to no confidence in information they get about the government from social media, the president, members of Congress and businesses.

Lynn Joseph, a retired artist in Las Vegas, tries to ferret information out on the internet, but is skeptical of just about all sources nowadays. “Do I trust anybody? No,” she said. “My philosophy is everybody’s guilty until proven innocent.”

Joseph, a Republican, is among the modest group of Trump supporters who do not trust the accuracy of his statements. Overall, about a third of those who approve of the president say they trust information they get from him about the government only a moderate amount, and roughly another quarter say they have little to no trust.

“I’m a Trump supporter, but I know about him,” she said. “He speaks before he should.”