WASHINGTON, Nov. 24 (Xinhua) -- The United States stayed alert on Thursday in the wake of recent mass shootings, while Americans gathered together for Thanksgiving amid high inflation and resurging COVID-19 and other viruses. 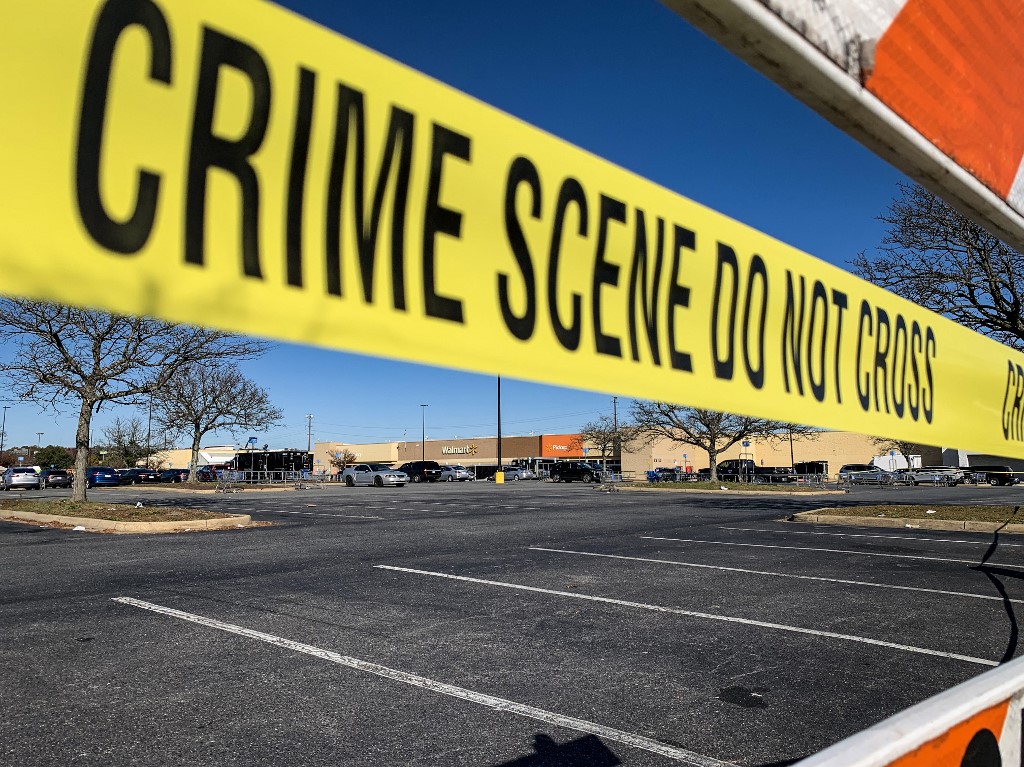 Crime scene tape blocks the parking lot outside of a Walmart following a mass shooting the night before in Chesapeake, Virginia on November 23, 2022. (Photo: AFP)

The New York City Police Department beefed up security around this year's Macy's Thanksgiving Day Parade, which kicked off on Thursday morning with giant balloons, celebrity performers and festive floats.

The annual event came only a day after a night manager of a Walmart in Chesapeake, Virginia, opened fire before a routine employee meeting in a break room, killing six people and injuring four others. The shooter took his own life.

Bloodshed also occurred over the past weekend at an LGBTQ nightclub in Colorado Springs, Colorado, with a gunman killing five people and injuring 19 others.

"Because of yet another horrific and senseless act of violence, there are now even more tables across the country that will have empty seats this Thanksgiving," U.S. President Joe Biden said in a statement on Wednesday.

"We aren't numb -- we're traumatized," tweeted Shannon Watts, founder of Moms Demand Action, a grassroots movement that calls for an end to gun violence in the U.S., while she ascribed the problem to "400,000,000 guns in the hands of civilians coupled with weak gun laws."

"We have made a decision to saturate this nation with weapons, without any regard for a person's fitness to own a tool of potential mass murder," tweeted U.S. Senator Chris Murphy Wednesday, echoing Watts' remarks.

Biden reiterated calls to seek a ban on assault weapons on Thursday. "The idea we still allow semiautomatic weapons to be purchased is sick," he said during a visit to firefighters in Nantucket, Massachusetts, where he and his family were staying for Thanksgiving.

However, the chance of such a ban actually passing through the Congress is all but too remote in light of a Republicans-dominated House of Representatives next term and the 60-vote threshold to overcome the filibuster and pass legislation in the Senate, where Democrats have been projected to have only a slim majority after the 2022 midterm elections.

Spending time with family and friends at Thanksgiving remained important for Americans, and this year the cost of a meal was also top of mind.

Nearly every ingredient in the classic Thanksgiving feast is more expensive due to inflation, supply chain interruptions and the avian flu, according to the annual Thanksgiving dinner survey conducted by the American Farm Bureau Federation (AFBF).

"General inflation slashing the purchasing power of consumers is a significant factor contributing to the increase in average cost of this year's Thanksgiving dinner," AFBF Chief Economist Roger Cryan analyzed.

In the U.S., general inflation has been running from 7 percent to 9 percent in recent months, while the most recent Consumer Price Index report for food consumed at home reveals an increase of 12 percent year on year.

Other contributing factors behind the increased cost for the meal include supply chain disruptions, Cryan said.

"The higher retail turkey cost at the grocery store can also be attributed to a slightly smaller flock this year, increased feed costs and lighter processing weights."

The supply of whole turkeys available to consumers, he said, should be adequate this year, although there may be temporary, regional shortages in some states where avian influenza was detected earlier this year.

Americans named inflation as the most important issue driving their votes in the midterms earlier this month, according to an exit poll, with a large share of voters saying that inflation caused them or their families moderate hardship while 20 percent more said it caused them severe hardship.

Ayalla Ruvio and Forrest Morgeson, faculty in the Department of Marketing at Michigan State University's Eli Broad College of Business, wrote in the summary of a new study that concerned about the surge in prices, most Americans tend to buy gifts for fewer people or purchase less expensive items this holiday season.

American families got together on Thursday for a third Thanksgiving in the era of COVID-19, with two other viruses of concern also rapidly spreading -- flu and the respiratory syncytial virus (RSV).

"We're facing an onslaught of three viruses -- COVID, RSV, and influenza. All simultaneously," William Schaffner, an infectious disease specialist at Vanderbilt University, was quoted by the National Public Radio (NPR) as saying. "We're calling this a tripledemic."

The "tripledemic" is reportedly pushing some hospitals in the United States over the edge, as the country is struggling to address a shortage of pediatric beds, medical staff and even some medications.

"Our system is stretched to its limit and without immediate attention, the crisis will only worsen," Mark Wietecha, CEO of the Children's Hospital Association, said in a statement.

At the annual Thanksgiving turkey pardon ceremony at the White House earlier this week, Biden made a pitch for flu and COVID-19 vaccinations ahead of the winter holidays.

"We have new COVID vaccine updates to deal with new variants to protect you and your loved ones. So, get it today," he said. "Get your flu shots as well. This winter can be much happier than recent holiday seasons, but you have to do your part."

The U.S. has reported 98.5 million COVID-19 cases and more than 1 million deaths since the pandemic broke out almost three years ago. Top U.S. infectious disease expert Anthony Fauci said on Tuesday that he never imagined the pandemic would last so long and take so many lives.

Fauci, who's stepping down next month as head of the U.S. National Institute of Allergy and Infectious Diseases after nearly four decades at the helm and as White House chief medical advisor, also reflected on America's response to the public health crisis.

"When I see people in this country, because of the divisiveness in our country, not getting vaccinated for reasons that have nothing to do with public health but have to do with divisiveness and ideological differences, as a physician, it pains me," he told reporters in his last appearance from the White House briefing room.