WORLD Americans without bank accounts must wait for federal checks

Americans without bank accounts must wait for federal checks 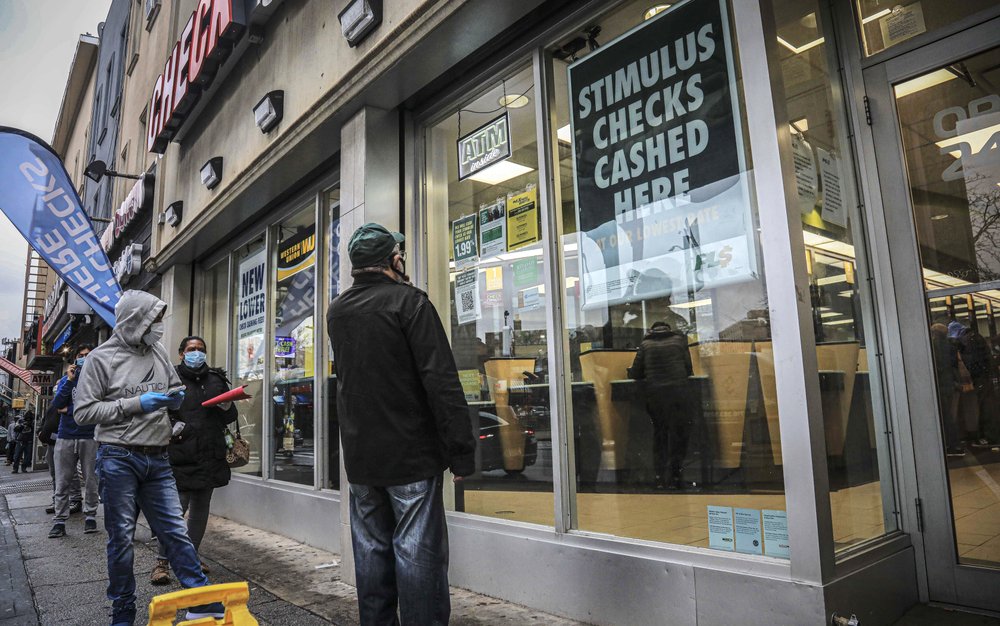 In this April 24, 2020, photo, people maintain social distancing and wear face masks due to COVID-19 concerns, while waiting to enter a check cashing service center in the Brooklyn borough of New York. (Photo: AP)

NEW YORK (AP) — As the coronavirus crisis took hold, Akeil Smith’s employer slashed her work as a home health aide to 25 hours per week. Her $15-an-hour salary no longer provided enough to pay her $700 monthly rent, and she had to visit food pantries for groceries.

While millions of U.S. workers have already received a quick relief payment from the federal treasury through direct deposit, Smith is among millions of others without traditional bank accounts who must wait weeks for paper checks. When the checks finally arrive, this disproportionately black and Hispanic population often has little choice but to use expensive check-cashing services to access the money.

“I live check to check, and right now I need more groceries,” Smith, 35, told The Associated Press as she stood inside Payomatic, a small check-cashing store in a predominantly black Brooklyn neighborhood.

In the six weeks since the pandemic shut down much of the U.S. economy, more than 30 million American workers have filed for unemployment insurance. Congress passed a $2.2 trillion economic rescue package.

The government in April began sending $1,200 for each individual, $2,400 for each married couple and another $500 for each dependent child to poor and middle-class families across the United States. Wealthier families get either a reduced payout or nothing depending on their income.

To help smooth the delivery of the payments, the government launched an online portal for people to provide their banking information for direct deposit. But that system offered nothing to people without savings or checking accounts.

A House Ways and Means Committee memo obtained by AP estimated about 5 million paper checks will be issued each week, meaning those most in need could wait many weeks for their payments.

In Houston, Ta’Mar Bethune, a 41-year-old mother of four grown children who is raising a grandchild, is likely to wait a while. As a younger woman, she struggled for years with affording bank account fees until her account was closed. In the 1990s, she also was a victim of identity theft and never fully recovered.

More than 20 years later, Bethune still cannot pass a standard background check to open a checking account because the banking system views her as too risky, she said. To get by, she transfers the money she makes as a professional hairdresser and babysitter onto a non-bank debit card.

“They charge you an arm and a leg,” she said, citing a monthly fee and a charge for every swipe or withdrawal. “You never get your full money. It’s bad, but I have no other choice.”

Bethune receives financial coaching from the Houston Area Urban League, a nonprofit organization helping low- to moderate-income families examine their behaviors around spending and saving. The organization says many families are reluctant to open bank accounts, especially if they have been burned by the system.

“Nobody wants to be exploited,” said Carmela Walker, a financial coach for the group.

Approximately 8.4 million U.S. households were considered “unbanked” in 2017, meaning that no one in the household had an account, according to the Federal Deposit Insurance Corp. Another 24.2 million households were “underbanked,” meaning they might have a bank account but members of the household also used an alternative financial service for money orders, check cashing, international remittances, payday loans and pawn shop loans, often at high costs.

Some of those services have been criticized for being predatory and marketing to black and Hispanic communities, which are disproportionately unbanked. Roughly 17% of black households and 14% of Hispanic households were without a bank account in 2017, compared with just 3% of white households and 2.5% of Asian American households, the FDIC said.

Advocates say the federal government should use the pandemic payments as an opportunity to bring more people into the banking system via Bank On accounts, which are FDIC insured, cost $5 or less a month and do not allow overdrafts or charge insufficient-fund fees. The accounts can be used for direct deposit, purchases and paying bills.

Otherwise, long lines at check-cashing stores could stretch into the fall and pose dangers to public health.

“There’s now a health component to being unbanked — people are going to have to take literal risks with their health, in order to receive and then spend these dollars,” said Jonathan Mintz, CEO of the Cities for Financial Empowerment Fund, which aims to get underserved Americans set up with affordable bank accounts.

The opportunity to attract customers with relief payments is not lost on check cashing and payday loan businesses, an $11.2 billion network of storefront locations in cities big and small.

In Brooklyn, B&H Check Cashing, in the predominantly Hispanic neighborhood of Bushwick, posts its rates for cashing checks on a wall. A $1,200 check, for example, would cost $26.76 to cash.

Essence Gandy, 26, stood in a line of two dozen people that snaked outside a PLS Check Cashers in Brooklyn to cash in loose change at a Coinstar kiosk. Her checking account was closed months ago because she had insufficient funds and was unable to get back in good standing.

“I’ve got bills on top of bills,” said Gandy, who also has credit card debts and is behind on payments to a mattress store. She said she hopes to use the federal relief payment to catch up on bills and will likely cash the paper check at PLS.

A representative of PLS, which has 300 locations in 12 states, said it has been informing regular customers that stimulus checks can be cashed at their lowest rates.