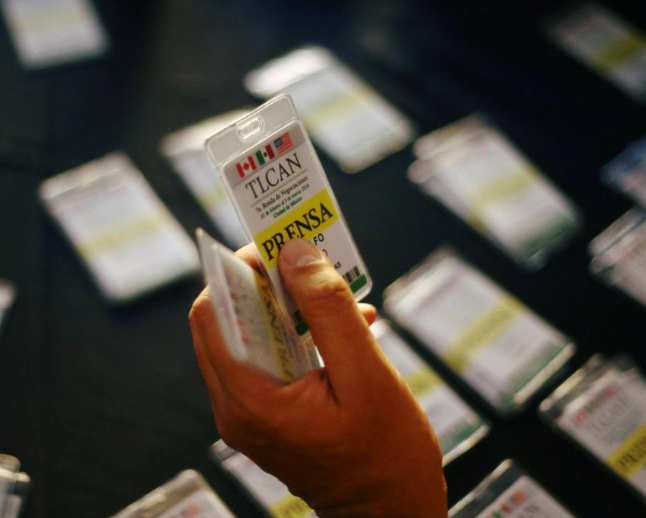 Press cards for the 7th round of NAFTA talks with the US, Mexico and Canada in Mexico City, Mexico February 25, 2018. Photo: Reuters

US, Mexican and Canadian negotiators met on Monday seeking to narrow disagreements on how to overhaul the NAFTA trade deal despite renewed signs of tension between Mexico and US President Donald Trump over his planned border wall.

The trade teams began a seventh round of talks on Sunday aiming to finish reworking less contentious chapters of the North American Free Trade Agreement in order to create space to broker agreement on the trickiest subjects.

Still, with a presidential election looming in Mexico in July and US mid-term congressional elections in November, the talks increasingly run the risk of getting entangled in domestic political considerations.

Negotiators are confident that the lesser hurdles will gradually be cleared. But the discussions have again been clouded by the proposed wall along the US southern border that Trump has long touted as a necessity to curb illegal immigration and that he says Mexico must pay for.

Mexico has consistently rejected paying for the wall, and its government had hoped to arrange a meeting between President Enrique Pena Nieto and Trump in the next few weeks. However, a senior US official said at the weekend that plan had been postponed after a phone call between the two soured over the wall earlier this month.

The trade negotiators have become used to such distractions, but the talks are increasingly centering on U.S. demands that officials say can be resolved only at the top political level.

Mexico’s government has not commented officially on the derailment of the planned meeting, but Juan Pablo Castanon, head of the powerful CCE business lobby, was less reticent as he took stock of the unfolding NAFTA negotiations in Mexico City.

“Obviously, the cancellation of the Mexican president’s trip to the United States is an important element in the negotiations: it’s politics that can help us resolve the technical issues we’re moving forward on,” Castanon said.

The NAFTA talks were launched last year after Trump said the 1994 agreement should be overhauled to better favor American interests or Washington would quit the accord.

One former Mexican official still familiar with the process said the government was concerned that the fallout from the Trump-Pena Nieto phone call could weigh on the atmosphere at the talks, in spite of hopes that several chapters may be finished.

Castanon of the CCE said measures on e-commerce, telecommunications and sanitary standards for agricultural products were almost completed, and others close to the talks believe the energy chapter could also conclude.

Officials do not anticipate major breakthroughs on the most intractable proposals during the latest round of talks in Mexico City, which are due to run until March 5.

US demands range from changes to automotive content origin rules and dispute resolution mechanisms, to imposing a clause that could automatically kill NAFTA after five years.

Agriculture, rules of origin, labor and regulatory practices were among the issues due to be discussed on Monday, one day before chief negotiators return to the fray.

The Trump administration wants NAFTA rules of origin changed to make automakers source more parts from the region and specifically the United States, a major sticking point that the industry itself opposes.

The government is concerned that a lack of progress on the issue could hurt the renegotiation, the former official said.

In a sign of movement, the U.S. official leading the auto content negotiations was called back to Washington from Mexico for consultations on Monday, U.S. and Mexican officials said.

One official said the negotiator went back to talk to U.S. automakers and U.S. Trade Representative Robert Lighthizer

Seeking to break the deadlock, the Mexican government has said it would put forward a proposal on rules of origin at this round, but a Mexican official said on Monday no new ideas had been presented so far.

There was little sign of compromise on other thorny issues early on, with a senior Canadian agriculture official pushing back against U.S. demands to dismantle Canadian protections for the dairy and poultry sectors known as supply management.

“When it comes to supply management, we believe there can be no concession,” said Jeff Leal, the minister of agriculture, food and rural affairs for the province of Ontario.