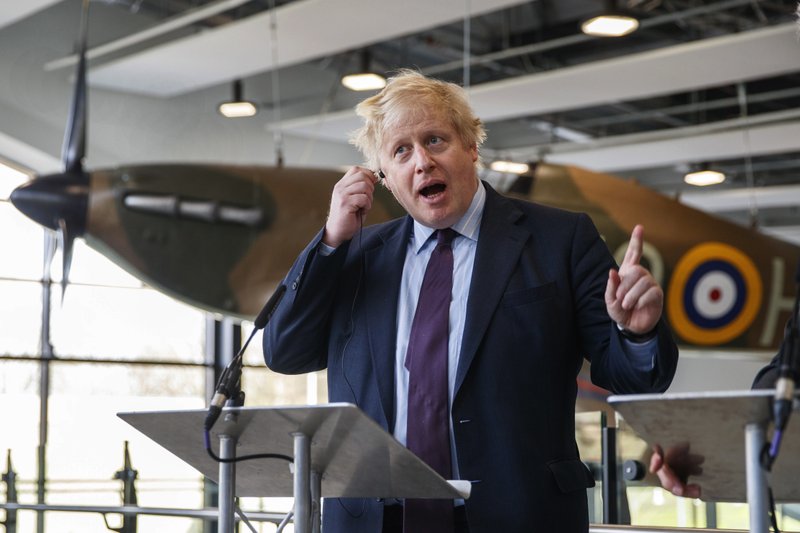 Britain’s foreign minister said Sunday that he has evidence Russia has been stockpiling a nerve agent in violation of international law “very likely for the purposes of assassination.”

Foreign Secretary Boris Johnson said the trail of blame for the poisoning of former Russian spy Sergei Skripal and his daughter Yulia in the English city of Salisbury “leads inexorably to the Kremlin.”

His comment came after a Russian envoy suggested the toxin used to poison the Skripals could have come from a UK lab.

Johnson told reporters that Britain has information that within the last 10 years, “the Russian state has been engaged in investigating the delivery of such agents, Novichok agents ... very likely for the purposes of assassination.”

Johnson said he will brief European Union foreign ministers on the case Monday before meeting with NATO Secretary-General Jens Stoltenberg.

He also said officials from the Netherlands-based Organization for the Prohibition of Chemical Weapons would arrive Monday in Britain to take samples of the nerve agent used to poison the Skripals.

Britain says it is Novichok, a class of powerful nerve agent developed in the Soviet Union toward the end of the Cold War. Tests to independently verify the British findings are expected to take at least two weeks, Britain’s Foreign Office said.

Vladimir Chizhov, Moscow’s EU ambassador, said Russia has no chemical weapons stockpiles and was not behind the poisoning.

“Russia had nothing to do with it,” Chizhov told the BBC.

Chizhov pointed out that the UK chemical weapons research facility, Porton Down, is only eight miles (12 kilometers) from Salisbury, where Sergei Skripal — a former Russian intelligence officer convicted in his home country of spying for Britain— and his daughter were found on March 4. They remain in critical condition.

Asked whether he was saying that Porton Down was responsible, Chizhov replied: “I don’t know.”

The British government dismissed the ambassador’s suggestion as “nonsense.”

Johnson said it was “not the response of a country that really believed itself to be innocent.”

Britain and Russia have each expelled 23 diplomats, broken off high-level contacts and taken other punitive steps in the escalating tit-for-tat dispute, which clouded the run-up to Sunday’s presidential election in Russia. President Vladimir Putin is widely expected to win a fourth term.

Western powers see the poisoning of the Skripals as the latest sign of increasingly aggressive Russian interference in foreign countries.

Johnson said Britain’s National Security Council will meet this week to discuss what further measures the country might take.

He said these could include “defending ourselves against cyber-attack, (and) looking at any economic measures that could be taken against Russians who corruptly obtained their wealth.”

Opposition lawmakers are calling on the British government to clamp down on the illicitly gained money of wealthy Russians in Britain. Critics say UK authorities have been slow to investigate the origins of the wealth invested in London’s financial district and property market.

The spy dispute has sent UK-Russia relations to Cold War-levels of tension.

Russia’s ambassador in London, Alexander Yakovenko, called for “cooler heads,” telling the Mail on Sunday that the dispute is “escalating dangerously and out of proportion.”

But Russian presidential contender Ksenia Sobchak, a former TV star who is the only candidate to openly criticize Putin, said blame did not lie entirely with Britain.

“We don’t have any improvements, everything is only getting worse,” she said. “And this will continue, because this is our foreign policy: very aggressive and very unpleasant.”