Dry-coughing as he pedals — a hack, hack, hack after-effect of his own personal battle with COVID-19 — the doctor cycles through the dark of pre-dawn Paris, speeding to a crisis meeting at his hospital where, way back in February, the disease carried away the first of what has now become more than a quarter-million dead in Europe. 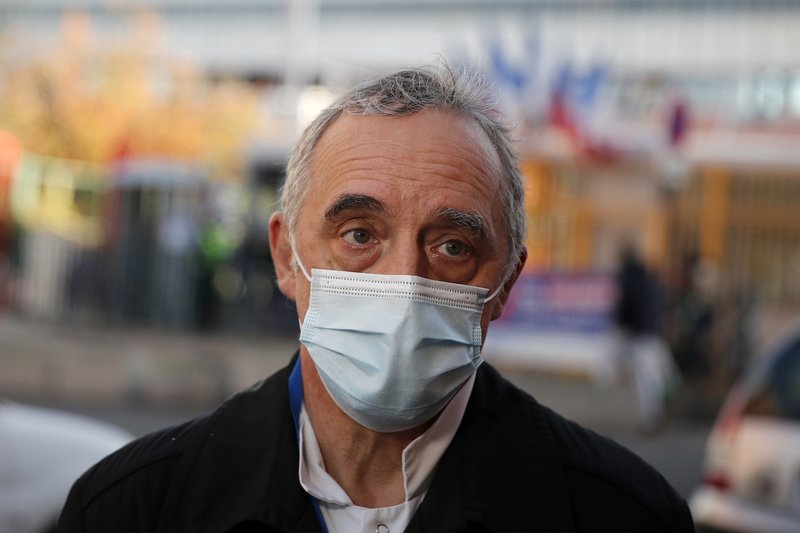 Dr. Philippe Montravers speaks with The Associated Press at the main entrance of the Bichat Hospital, in Paris on Tuesday, Nov. 10, 2020. (Photo: AP)

In the nine months since then, critical care chief Philippe Montravers and the 150 doctors and nurses he leads at the towering Bichat Hospital in Paris have become experts about their enemy. That knowledge is proving invaluable against the second deadly surge of the virus that is again threatening to overwhelm European health systems.

Puffing and spluttering as he pedals, because his lungs are still congested, Montravers details the progress that he and his team have made in their care since they fought off the gruesome initial wave of cases last spring, therapeutic advances that are helping Bichat and other hospitals better resist the renewed tide of infections. Bichat in February was the first hospital outside Asia to record the death of a person infected with the virus: an 80-year-old tourist from China.

“In the first wave, people didn’t dare come to the hospital. They were scared, scared of being infected,” Montravers recalls. “When they arrived, they were on their last legs, exhausted, unable to move, and so — hop! — we intubated and ventilated them.”

Now, there are steroid treatments that weren’t available to Bichat’s doctors in the first surge. They have also learned not to put patients on ventilators if at all possible and to instead keep them awake and bathed in oxygen, dispensed through face masks instead of invasive tubes. The sick are also savvier, and are seeking help earlier for their symptoms, making them easier to treat.

Added together, these and other advances mean that patients more often are spending days instead of weeks in critical care and surviving in greater numbers.

“We’ve won about 15 days in caring for them and the mortality has dropped by nearly half,” Montravers says.

That picture is reflected nationwide, too. Although France now has more patients hospitalized with the virus than during the April peak of the initial wave, there are about 2,000 fewer in intensive care. The situation remains dire, with one death in four in France now linked to COVID-19 and the country again largely locked down. But hospitals appear to be holding, with capacity to survive the surge’s high point projected to sweep across France in coming days.

“The system is on the verge of cracking but, at the same time, there is a bit of hope at the end of the tunnel,” Montravers says.

At another of Paris’ major hospitals, anesthetist nurse Damien Vaillant-Foulquier is also starting to believe that they will see off this wave of infections, too.

When the system was struggling with coronavirus cases in the spring, he was switched from his specialty job of putting people to sleep for surgeries and instead thrown into the fight in intensive care wards, including intubating patients on respirators.

But he has not been drafted this time, even as cases snowballed, enabling him to continue caring for non-COVID-19 patients getting liver transplants and cancer surgeries.

“In September-October, I and most of my colleagues were convinced that we’d be heading back to the ICUs,” he said. “But for the moment, no.”

Bichat has been able to set aside more resources for life-saving nonvirus treatments, too.

In March-April, the hospital that specializes in heart and lung transplants, among other things, stopped about two-thirds of surgeries to free up space and staff for virus patients, Montravers says. This time, just one-third of surgeries are being postponed. Those that have gone ahead even as teams fought the virus surge included a lung transplant last week and another the week before that.

The illuminated towers of Notre-Dame Cathedral loom against the lightening sky as Montravers pedals to his morning meeting. There, he and other hospital administrators discuss how best to divvy up their beds and personnel. One of the questions he’s asking himself as he rides is what might the next 48 hours hold? Should he mothball more operating rooms to divert additional resources to fighting the virus?

“The situation at the hospital is complicated because we’re not sure where we are going, exactly,” he says.

From personal experience, Montravers is doubly aware of how the virus can spring nasty surprises. He and his wife, who also works in a hospital, “were totally destroyed for two weeks” when they were infected, laid low by fevers, headaches, pain and coughs. He lost 5 kilograms (11 pounds) of muscle, which he is now trying to regain on his bike.

But the good news on his morning ride was that the previous night had been calm in his critical care department; they took in just one additional coronavirus patient, a 70-year-old woman with breathing difficulties. They still had beds to spare in an operating room that was converted for critical-care use in case of any sudden avalanche of virus cases. So far, they had not been needed.

“It’s not an overwhelming tide, as we could have been expecting,” he said. “Things are not doing so badly and not as badly as we expected one month ago.”