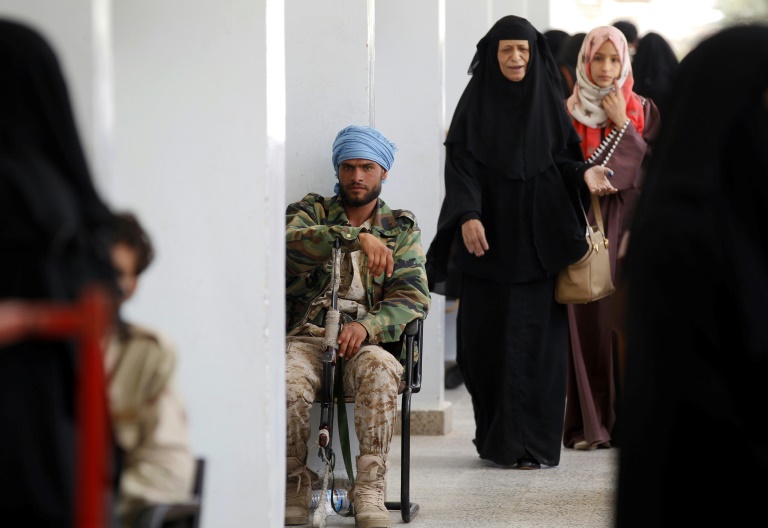 The Iran-aligned Huthi rebels control the capital Sanaa and much of northern Yemen. (Photo: AFP)

Amnesty International on Wednesday condemned the prolonged detention of 10 journalists by Huthi rebels in Yemen, saying it reflected "the dire state of media freedom" in the war-torn country.

The 10 journalists have been held since the summer of 2015 and are being prosecuted on trumped-up spying charges, according to the rights group.

It said the men have been tortured, held incommunicado and deprived of medical care.

"The unlawful and prolonged detention, torture and other ill-treatment of these 10 journalists is a shocking reminder of the repressive media climate facing journalists in Yemen and illustrates the risks they face at the hands of all parties to the conflict," said Rasha Mohamed, Amnesty's Yemen researcher.

"These men are being punished for peacefully exercising their right to freedom of expression.

"The de facto Huthi authorities should release them immediately and drop all the charges against them," he said in a statement.

In December 2018, the men were charged with a series of offences, including spying -- which carries a death sentence in Yemen -- and cooperating with the Saudi-led coalition backing the government, said Amnesty.

It was unclear when their trials will start.

The Iran-aligned Huthi rebels control the capital Sanaa and much of northern Yemen.

According to Amnesty, some of the journalists worked for online media outlets affiliated with Al-Islah, an Islamist party that opposes the Huthi rebels.