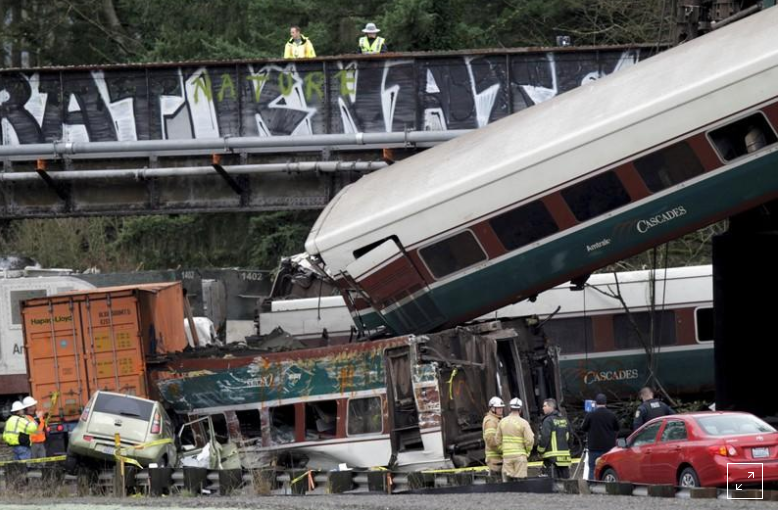 The scene where an Amtrak passenger train derailed on a bridge over interstate highway I-5 in DuPont, Washington, US on December 18, 2017. Photo: Reuters/Steve Dipaola

The Amtrak engineer aboard a passenger train that derailed last month in Washington state has told the National Transportation Safety Board he misread a signal and tried to brake before the crash that killed three people, the agency said on Thursday.

All 12 cars and one of two engines jumped the tracks at a curve on Dec. 18, sending some cars tumbling from a bridge onto an interstate highway near Seattle.

The NTSB this month said the crash, which also injured 70 people, could have been prevented if a safety technology system known as positive train control had been operational. It said the train was traveling at 79 miles per hour (126 km per hour) when it derailed, far above the 30 mph speed limit.

The agency said it was not able to interview the engineer and the qualifying conductor, who were in the lead locomotive, until last week because both had suffered serious injuries in the crash.

The engineer told investigators he was aware that the curve with a 30 mph (48 kph) speed restriction was at milepost 19.8 of the track, and that he had planned to start braking about one mile (1.6 km) prior to the curve, the agency said. The engineer said he did not recall seeing milepost 18 or the 30 mph advance speed sign that was posted two miles (3.2 km) ahead of the speed-restricted curve, the NTSB said.

The train was on its inaugural run on a faster route from Seattle to Portland, Oregon. The agency reported last month that six seconds before the derailment, the engineer remarked that it was speeding, and that he then applied the brakes but apparently not the emergency brake.

The NTSB did not disclose the name of the engineer, 55, who was hired by Amtrak in 2004. It said he had completed about seven to 10 observational trips in the locomotive as well as three trips operating the equipment in the weeks before the accident. The agency said the engineers reported being well rested and that the qualifying conductor was not a distraction.