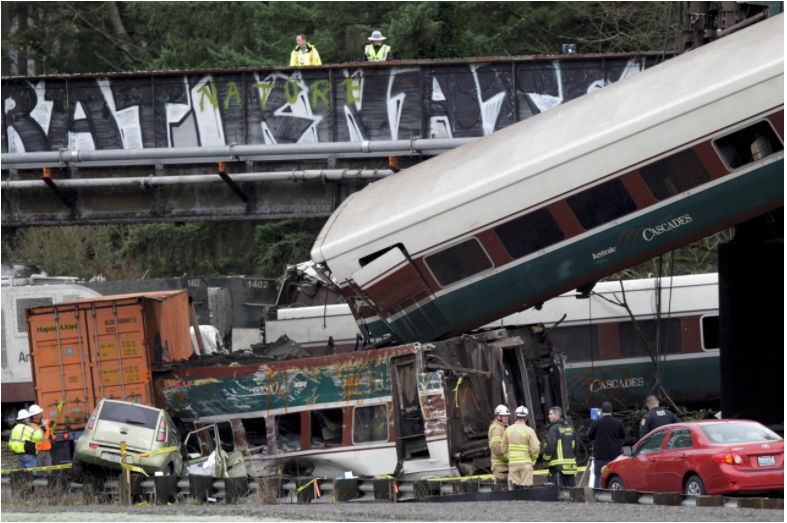 The scene where an Amtrak passenger train derailed on a bridge over interstate highway I-5 in DuPont, Washington, December 18, 2017. Photo: REUTERS/Steve Dipaolap

Six seconds before an Amtrak train derailed off a bridge and onto a highway near Seattle, the engineer remarked that the train was speeding, US investigators said on Friday.

The engineer then applied the brakes but apparently not the emergency brake, the National Transportation Safety Board (NTSB) said in a statement after retrieving and reviewing data from the data recorder and inward- and outward-facing cameras. Monday’s crash south of Seattle killed three people and sent about 100 others to hospitals. All 12 cars and one of the two engines jumped the tracks at a curve, sending some cars tumbling from a bridge onto an interstate highway.

The board previously said the train was going about 80 miles per hour (129 km per hour) in a 30-mph zone. On Friday it said the final recorded speed of the locomotive was 78 mph.

The train’s video cameras were damaged in the crash but investigators were able to download the contents with the manufacturer’s help at the NTSB lab in Washington, the board said in a statement.

“About six seconds prior to the derailment, the engineer made a comment regarding an over speed condition,” the board said.

“The engineer’s actions were consistent with the application of the locomotive’s brakes just before the recording ended. It did not appear the engineer placed the brake handle in emergency-braking mode,” the board said.

The cameras did not show the crew using any personal electronic devices, the board said. Such use is of interest since a Southern California Metrolink commuter train crashed into a freight train in 2008, killing 25 people and injuring 111 others. The board determined the engineer was distracted by text messaging.

PTC must be installed on all US trains and tracks by the end of 2018. It was not operational on the track, owned by the Sound Transit commuter rail, where the Amtrak train derailed.

“It is imperative that the rail industry urgently work together to get PTC activated on the national network as soon as possible, and certainly by the December 2018 federal deadline, if not before,” Anderson said in a statement.

About half of Amtrak’s locomotives and two-thirds of its track had PTC as of June, US data show.