Iowa Democrats were drawn to two faces of change.

After a daylong delay, partial results from the state’s Democratic caucuses showed Pete Buttigieg, the former mayor of South Bend, Indiana, with a narrow lead over Vermont Sen. Bernie Sanders. 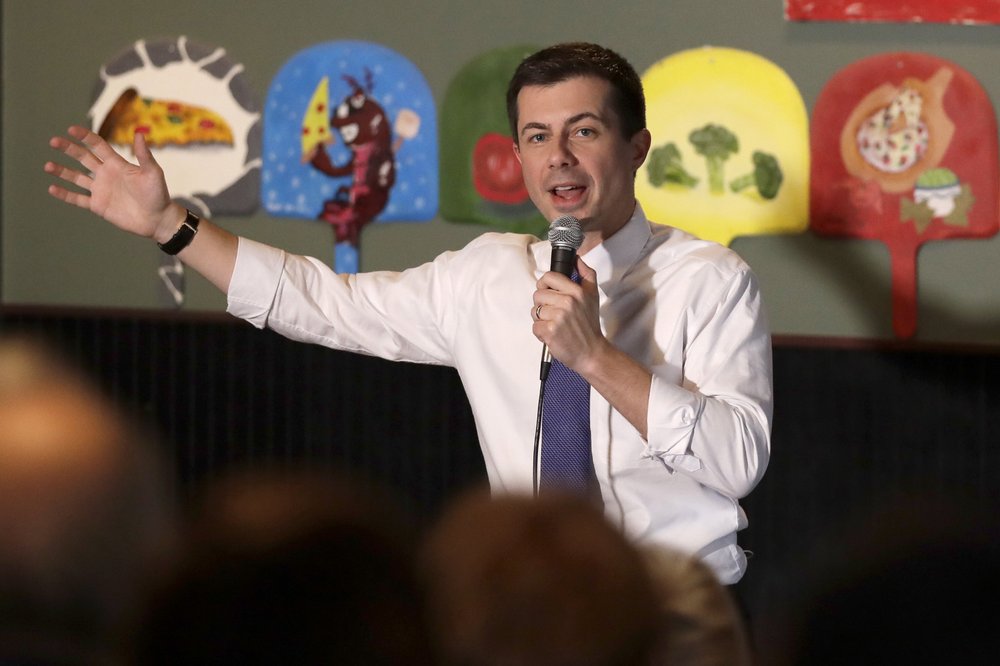 By many measures, Buttigieg, 38, and Sanders, 78, are a study in contrast. They are the youngest and oldest candidates in the Democratic primary. Buttigieg has campaigned as a moderate, calling for more incremental improvements to the nation’s health care and higher education systems, while Sanders — a self-described democratic socialist — is urging sweeping overhauls of domestic policies.

Yet both are pitching themselves as an antidote to establishment forces in Washington that many voters, in both parties, feel have left them behind. And their early success in this primary season suggests Democrats are just as interested in a fresh approach as Republicans were four years ago when they stunned their party’s establishment by nominating Donald Trump, a novice politician and reality television star.

“There’s still a desire for change,” said Karen Finney, who advised Hillary Clinton’s 2016 presidential campaign. “And elections are always about the future.”

The Iowa Democratic Party released 71% of results on Tuesday after delays prompted by sweeping technical issues paralyzed the caucus system. The Associated Press has not yet declared a winner of the contest, which kicks off Democrats’ months-long process to pick a nominee to face off against Trump in November.

Both Buttigieg and Sanders have faced questions about their electability in the general election. Democratic rivals have knocked Buttigieg’s inexperience, given that his highest elected office has been as mayor of a city of 100,000. And party moderates fear that Sanders will turn off independents and centrist Republicans who may be seeking an alternative to Trump.

Yet the early results, as well as an AP survey of Iowa Democrats, offered a glimpse of how Sanders and Buttigieg gained ground on their rivals. They hold a sizable lead in particular over former Vice President Joe Biden, whose centrist campaign has focused in part on a call for a reset in Washington after the Trump the era.

Among Sanders’ supporters, 88% said it was more important to vote for a candidate who will fundamentally change the political system than a candidate who will restore the system to what it was before Trump was elected in 2016. Just over 70 percent of Buttigieg supporters felt the same, according to AP VoteCast.

“The fact that a young gay mayor from a small Midwestern town and a nearly 80-year-old self-proclaimed socialist appear to be leading the pack out of the first primary contest should make Democrats question their long held prognostications about what the party is looking for in a nominee,” said Jennifer Psaki, a former campaign and White House aide to President Barack Obama.

Buttigieg leaned into that call for change Tuesday in New Hampshire, the next state on the primary calendar. Democrats, he argued, win when they nominate presidential candidates who can “turn the page” on the past and usher in the voices of a new generation.

“In order to govern, in order to lead, in order to move this country forward, we need a president focused on the future and ready to leave the politics of the past in the past,” Buttigieg said during a high-energy event Tuesday night in Concord, New Hampshire.

Sanders has also spent three decades in Washington, first in the House and then in the Senate. But he’s largely served as an independent, floating on the fringes of the Democratic Party before breaking out in the 2016 presidential primary and emerging as a fierce challenger to establishment favorite Hillary Clinton.

During his own rally in New Hampshire on Tuesday, he urged his supporters to help him finish the job he started during that campaign.

“Let us create the political revolution this country needs,” he declared.

There are others in the Democratic field who have called for transformational change in Washington, namely Massachusetts Sen. Elizabeth Warren, who shares many of Sanders’ progressive views. Warren trails Sanders and Buttigieg in the partial Iowa results, but is expected to be competitive in the New Hampshire primary.

The Democratic field indeed remains crowded coming out of Iowa, and billionaire Michael Bloomberg is waiting for the candidates when the race shifts to the March Super Tuesday contests. But the early Iowa results offer a preview for what could become a head-to-head contest between the party’s moderate and liberal flanks.

Among Sanders supporters, 45% identified as “very liberal,” and another 26% said they were somewhat liberal, according to VoteCast. Nearly two-thirds of Buttigieg’s supporters were self-described moderates.

Buttigieg has staked out more moderate positions on some of the major issues that have roiled the Democratic primary, most notably health care. Unlike Sanders, who backs a government-run, Medicare for all system, Buttigieg has said he would offer public health care to those who want it, while allowing others to keep private insurance.

But Buttigieg is also staking out forward-leaning positions on a range of other issues. He’s called for scrapping the Electoral College and adding more seats to the Supreme Court.

As he addressed supporters before departing Iowa late Monday, Buttigieg echoed the speech Obama delivered in the state after his surprise 2008 caucus victory, declaring that Iowa had “shocked the nation.”

It was Iowa that helped Obama shake off questions about his own electability, catapulting him to the Democratic nomination and ultimately the White House. Both Buttigieg and Sanders now hope the state can do the same for them.