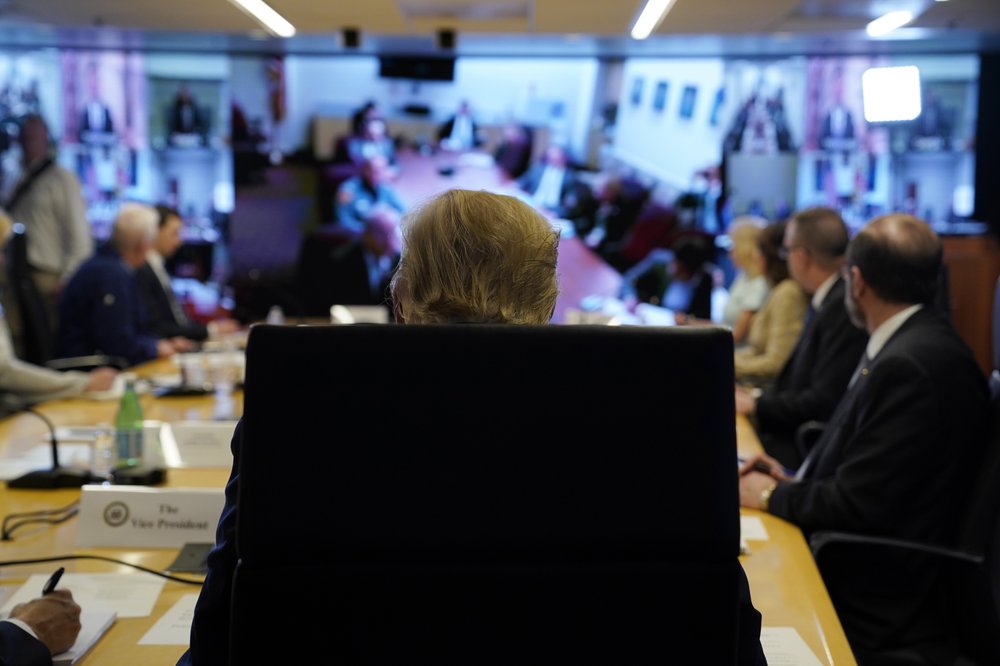 US President Donald Trump attends a teleconference with governors at the Federal Emergency Management Agency headquarters in Washington. (Photo: AP)

A flu pandemic was ravaging the world, killing indiscriminately in almost every country, including more than 600,000 deaths in the United States. The states were in a panic, but there was almost no call for broad federal assistance — at least, not one heeded by the president.

Woodrow Wilson did not address the nation on the subject of the pandemic of 1918-19 a single time. He did not call for Congress to act, and he did not summon the nation to unite. He had another battle to fight in trying to bring World War I to a close, even though the flu killed far more people.

While his posture on the flu seems passive, even reckless, in a modern light, Wilson’s approach to war demonstrated an entirely different view of federal power than President Donald Trump’s approach to the current pandemic. Wilson fully exploited the authority of the federal government, compelling rationing, propaganda and nationalizing the railroads, all directed at defeating Germany, not the virus.

The country, after all, was already accustomed to 100,000 deaths a year from the flu. There was a limited public health infrastructure. The use of vaccines remained uncommon, and therapies were often primitive. It wasn’t that Wilson was restrained about using federal power; he simply had less precedent to lean on and a much higher priority in the war effort.

Trump has framed his fight against the pandemic as a war, and himself as a wartime president. But rather than fully lever the power of the federal government, he has increasingly put the responsibility on the states, reigniting the kind of tension the nation’s founders wrestled with more than two centuries ago.

The feud with states boiled over Thursday when Trump got into a contentious exchange with several governors. States are demanding more sweeping help from the federal government to battle an insidious challenge the founders never knew existed — a global public health crisis. It calls into question how well a system of federalism — where power is legally shared between a national government and the states — can work when the needs are so urgent and the politics so polarized.

The virus has seeped into states blue and red, hitting Louisiana as hard as it’s hitting California, and there are stark warnings coming from swing states like Michigan, Florida, and Pennsylvania, too.

Most presidents before Trump have stipulated to “dealing with problems on a national level with national coordination,” said Jeffrey Engel, director of presidential studies at Southern Methodist University. Trump, he said, “for philosophical and political reasons,” is “taking a narrow view of what is his responsibility.”

“So even though Trump’s sense of federalism has historic precedent, and could be said to be closer to what the founders considered the proper division between states and the federal government — with the former having the lead responsibility for citizens’ health and immediate well being — it is entirely out of step with almost every response we’ve seen from presidents facing crises in anyone’s living memory.”

Still, Trump has in other contexts threatened to use federal power, as he did when he proposed intervention to stem homicides in Chicago, an improvisational foray on which he did not follow through.

When the country was founded, no one could have envisioned the speed and smallness of the world today. Yellow fever could be contained by isolating a city. It would have required nearly half a year to travel from Philadelphia to Wuhan, China, in 1787 instead of the single, air-carried, globalized day that it does now, Engel said.

“Given the speed and danger involved in issues large and small the founders never could have considered, I think the current pandemic requires a unified federal response,” Engel said.

One of the clearest measures of that would be Trump putting the Defense Production Act in full force to compel the production of critical supplies. Wilson (during World War I) and Franklin D. Roosevelt (during World War II) did so without law as the foundation for their action. On Friday, after repeatedly saying that he would spur private production through persuasion, Trump in effect ordered General Motors to make ventilators. “GM,” Trump said, “was wasting time.” But the company was already on that path.

No historical comparison is precise, but Trump and Wilson are the only American presidents to face serious national pandemics. The men were opposites in almost every way.

Wilson, a Southerner, was an intellectual, president of Princeton; Trump, a New Yorker, became president as a novice politician who said he relied on gold-plated instincts. Wilson wrote a book about constitutional government; Trump wrote “The Art of the Deal.” Wilson believed in deploying federal power, and he was also an avowed internationalist; Trump, who arrived in the presidency with limited ideological mooring, has renewed his call for stronger borders and immigration restrictions.

But Trump has also made clear that he believes states should shoulder responsibility. There is no mistaking his approach with Harry S. Truman’s “the buck stops here” view of accountability.

“Governor Inslee, that’s the state of Washington ... And you know, he’s always complaining,” Trump told Fox host Sean Hannity on Thursday. “And your governor of Michigan, I mean, she’s not stepping up. I don’t know if she knows what’s going on. But all she does is sit there and blame the federal government. She doesn’t get it done. And we send her a lot.”

Wilson used another approach. “He definitely took a national viewpoint that the federal government was supreme to the states,” said Thomas Knock, a Wilson biographer and scholar. “He and Theodore Roosevelt reinvented the presidency that way.”

Wilson pushed for the Federal Reserve, the Federal Trade commission, child labor laws and an eight-hour workday for railroad workers. During the war, he nationalized the railroads. The federal government had never played such an enormous role in the economy.

“He knew the federal government really was supreme over the states and that was the best way to transform American in light of the new industrial age,” Knock said.

In his book, Constitutional Government in the United States, Wilson said, “The question of the relation of the states to the federal government is the cardinal question of our constitutional system. At every turn of our national development we have been brought face to face with it, and no definition either of statesmen or of judges has ever quieted or decided it.”

“It cannot, indeed, be settled by the opinion of anyone generation, because it is a question of growth, and every successive stage of our political and economic development gives it a new aspect, makes it a new question.”

But when the flu started to sweep through the country in 1918, Wilson — a wartime commander-in-chief — did not see it for the threat it was. In that time, Knock said, there was a common expectation that the flu would kill Americans into the six figures and the pandemic came in waves.

“I don’t think it was much of a priority,” Knock said. “There was no precedent for that kind of public health role at the time.”

There is now. And it is testing the notion of federalism in ways not seen for more than half a century, with conflicts on open display almost daily — and, sometimes, evolutions in real-time.

On Friday, Trump, through his seeming directive to GM and his signing of the government’s largest relief effort, took a step toward an evolving view — perhaps even a Wilsonian one.