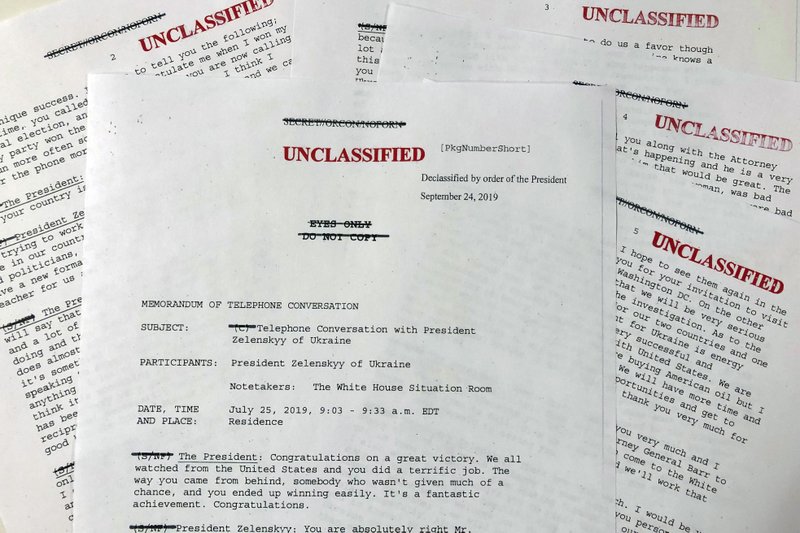 There were dozens of ears listening to President Donald Trump’s 30-minute phone call with the leader of Ukraine that is at the center of a House impeachment inquiry , and as many eyes that saw what he said.

White House staffers, working in the secure, soundproof Situation Room in the West Wing basement, listened in and chronicled the conversation . National Security Council personnel edited a memo written about the call. White House lawyers, according to a government whistleblower , directed that the memo be uploaded into a highly restricted classified computer network. And there were the staffers whose keystrokes on a computer made that happen.

They represent a universe of people, little known outside their vital circle of national security officials, who can either support or disavow the whistleblower’s account. Their roles could well become more public as the impeachment investigation unfolds and Congress seeks additional witnesses.

Some staffers involved with the call still work at the White House; others have left. But what was thought to be a routine conversation with Ukrainian President Volodymyr Zelenskiy turned into anything but that, when Trump asked him to investigate Ukraine’s involvement in the 2016 presidential election and the activities of Democratic political rival Joe Biden and his son Hunter.

30 MINUTES THAT CHANGED THE TRUMP PRESIDENCY

By the time staffers in the Situation Room got the president of Ukraine on the phone at 9:03 a.m., Trump had just finished firing off tweets claiming complete vindication from former special counsel Robert Mueller’s congressional testimony the day before about the Russia investigation. On the call, Trump was first to speak. He showered the 41-year-old Ukrainian, a novice politician and former comedian, with praise following his party’s victory in parliamentary elections. Zelenskiy chatted about how he wanted to “drain the swamp” in Kyiv and how he wished the European Union would provide more financial support. He told Trump that Ukraine was ready to buy more Javelin anti-tank missiles from the United States.

The next 10 words that came out of Trump’s mouth — “I would like you to do us a favor, though” — are what triggered the House impeachment inquiry that has imperiled his presidency.

Trump asked Zelenskiy to work with Trump’s personal lawyer Rudy Giuliani and Attorney General William Barr to look into Biden and his son, who served on the board of a Ukrainian gas company.

Trump says it was an innocent, “perfect” call. But some White House staffers, worried that Trump seemed to be asking Ukraine for dirt on Biden, sounded alarms. They suggested the memorandum of the call — “telcon” for short — be transferred into a restricted server, usually reserved for documents about covert operations.

This call, as well as others Trump has had with foreign leaders, was unusual in other ways, too. In past administrations, top foreign policy officials routinely briefed a president in person right before a call and provided written materials as well.

A former US ambassador to Russia, Michael McFaul worked at the NSC during the Obama administration and helped write briefs to prepare for dozens of calls with Russian leaders, including Vladimir Putin.

“Judging from the content of the Trump-Zelenskiy call, Trump was not reading talking points,” McFaul said. “No one on our team ever would have prepared a call package prompting Obama to ask for a personal favor that would help him win reelection. I also doubt that Trump’s NSC staff would have written or cleared such a talking point for their boss.”

One individual with firsthand knowledge of how the Trump calls with foreign leaders are handled said the president “hates” such “pre-briefs” and frequently has refused to do them. Trump doesn’t like written background materials either, preferring to handle the calls himself, often in the morning from the residence. Occasionally, while on the phone with foreign heads of state, Trump has handed the receiver to his daughter, Ivanka Trump, so she can talk with the leader, according to this individual.

The person said a six-page pre-brief with attachments was once prepared for Trump before a call to a foreign leader. But that turned out to be too long, as did a single-page version. Preparing pre-brief note cards that offered about three talking points for Trump to make on a call was the norm, according to this person, who feared retribution for describing this process and spoke on condition of anonymity.

The individual said that when Trump is done with the note cards, he often rips them up and tosses them in a burn bag. Staff who handle records have had to retrieve the burn bags from the residence, put the papers out on a table and tape them back together to preserve them as official presidential records, this person said.