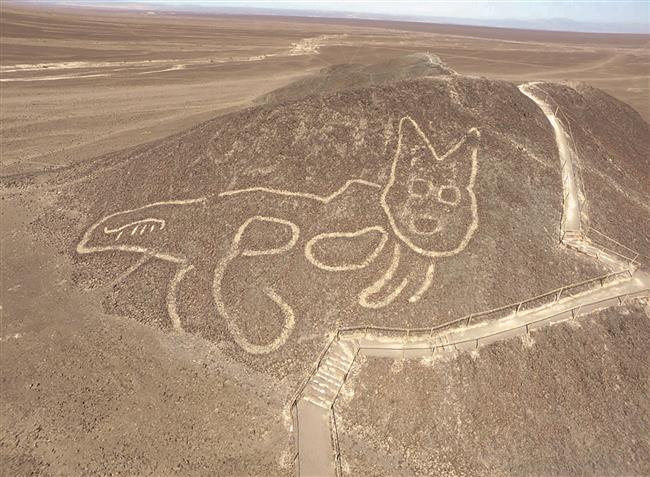 Undated handout picture released by the Peruvian Ministry of Culture, showing a giant cat figure etched into a slope at the UNESCO world heritage site in the desert near the town of Nasca in southern Peru, after its was discovered by archeologists and the area was cleaned as the geoglyph was barely visible and about to disappear due to erosion.

A giant 2,000-year-old figure of a cat that was on the brink of disappearing will be the new cat’s meow when Peru’s remarkable Nazca Lines attraction reopens to tourists in November.

The geoglyph is around 37 meters long and was recently discovered by a drone on a hillside, the culture ministry said.

“The figure was barely visible and was about to disappear due to the effects of natural erosion as it’s on a fairly steep slope,” said the ministry.

A group of archeologists took on the job of cleaning and preserving the geoglyph.

The outline shows a cat with its body in profile but its head front on.

The lines making up its outline were mostly well defined and 30-40 centimeters wide.