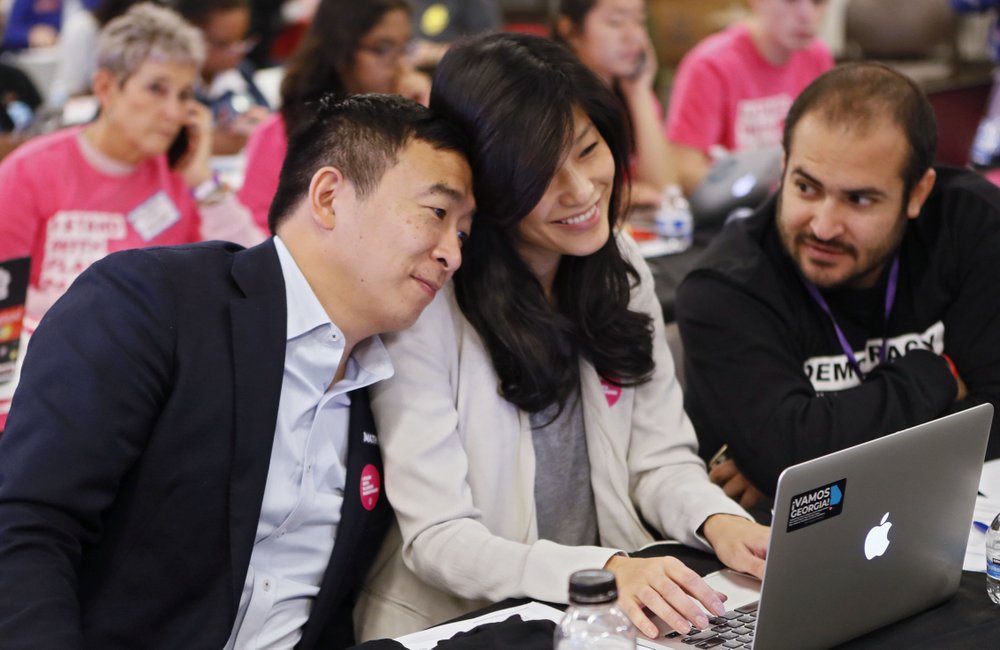 Democratic presidential candidate former technology executive Andrew Yang, leans on his wife with his wife Evelyn, as they join in at a Fair Fight phone bank at Ebenezer Baptist Church in Atlanta, November 21, 2019. The wife of Democratic presidential candidate Andrew Yang says she was sexually assaulted by her OB-GYN while she was pregnant with the couple's first child. (Photo: AP)

The wife of Democratic presidential candidate Andrew Yang says she was sexually assaulted by an obstetrician while she was pregnant with the couple’s first child.

Evelyn Yang said in an interview televised Thursday by CNN that the assault happened in 2012 and that she was initially afraid to tell anyone. She and 31 other women are now suing the doctor and the hospital system, saying they conspired and enabled the crimes.

Yang said she was encouraged to speak out after seeing the positive reception she and her husband had been getting on the campaign trail by being open about their son’s autism.

“Something about being on the trail and meeting people and seeing the difference that we’ve been making already has moved me to share my own story about it, about sexual assault,” she told CNN.

When she was seven months pregnant, Yang said, she believed her appointment was done and she was getting ready to leave when the doctor told her abruptly that he thought she might need a cesarean section. She said Hadden pulled her to him and undressed her, then used his fingers to examine her internally.

“I knew it was wrong. I knew I was being assaulted,” she said.

But Yang said she “just kind of froze” and didn’t react. “I remember trying to fix my eyes on a spot on the wall and just trying to avoid seeing his face as he was assaulting me, just waiting for it to be over,” she told CNN.

After the doctor left the room, she left the practice and didn’t return.

Hadden’s lawyer has denied Yang’s allegations in legal filings. His attorney declined a request to be interviewed by CNN.

Yang said she initially didn’t tell anyone what had happened to her. She said she blamed herself, thinking she must have done something to “invite this kind of behavior.”

Months later, after the couple’s son was born, Yang got a letter in the mail saying Hadden had left the practice. Curious, she looked him up online and saw that another woman had made a police report accusing him of assaulting her.

She said she realized then that she wasn’t to blame for his actions.

“This was a serial predator, and he just picked me as his prey,” she told CNN.

She said only then was she able to reveal the abuse to her husband.

In a statement Thursday, Andrew Yang said he was “proud” of his wife and no one deserves to be treated as she was.

“When victims of abuse come forward, they deserve our belief, support, and protection,” Yang said. “I hope that Evelyn’s story gives strength to those who have suffered and sends a clear message that our institutions must do more to protect and respond to women.”

He later tweeted, “I love my wife very very much.”

Evelyn Yang said several women came forward with similar stories about Hadden, and she learned the Manhattan district attorney’s office had an open case against him.

In 2016, she said, the DA’s office agreed to a deal with Hadden in which he pleaded guilty to one count of forcible touching and one count of third-degree sexual assault. He also lost his medical license and had to register as the lowest level of sex offender.

Yang said she felt betrayed by the plea deal, which allowed the doctor to avoid jail. The counts he pleaded to didn’t involve her case, she said.

Manhattan District Attorney Cyrus Vance Jr. said in a statement to CNN, “Because a conviction is never a guaranteed outcome in a criminal trial, our primary concern was holding him accountable and making sure he could never do this again -- which is why we insisted on a felony conviction and permanent surrender of his medical license.”

Yang and 31 other women are now suing Columbia University, where Hadden worked, along with its affiliates and the doctor itself, saying they “actively concealed, conspired, and enabled” Hadden’s crimes, according to CNN.

The lawsuit claims that medical assistants who worked with the doctor knew of the abuse but didn’t intervene because of a power imbalance and lack of training, CNN said.

Hadden has denied the additional allegations in court papers, CNN reported. Columbia University and the hospital system are fighting the lawsuit on procedural grounds, according to CNN.

A university spokeswoman told CNN in response to a detailed list of questions that the accusations are “abhorrent” and they “deeply apologize to those whose trust was violated.”