With France confined to fight the virus, a video circulated online in April showing a young man lying on the bloody ground next to two police officers — and quickly set off protests in struggling neighborhoods around the Paris region. 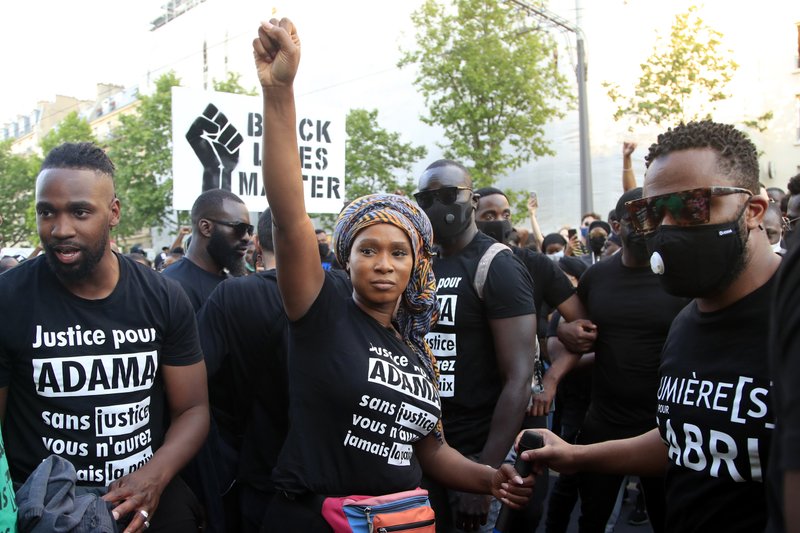 In this June 2, 2020 file photo, Assa Traore, sister of Adama Traore, raises her fist during a demonstration in Paris. (Photo: AP)

Sometime before, the man had been on a motorcycle. Then, he crashed into a suddenly opened police car door. Whether the door was opened on purpose or not is unclear, but what was clear was the anger the video sparked. A protest that night in the town of Villeneuve-la-Garenne led to others in a dozen Paris suburbs and similar neighborhoods around France in the ensuing days.

The relationship between police and marginalized residents of France's low-income neighborhoods, many of whom are Arab or black and trace their roots to former French colonies, has long been tense. Safety measures intended to curb the spread of COVID-19 further empowered police — but also empowered community activists using apps or online sleuthing to track and challenge what they see as an abuse of police power.

George Floyd's death in the U.S. has resonated especially loudly in places like Villeneuve, one of many banlieues, or suburbs, where poverty and minority populations are concentrated in France. Floyd-related protests against police violence and racial injustice have been held around France, and more are planned for Tuesday evening.

In a pivotal moment for modern France, rioting engulfed the country for three weeks in 2005 after two boys who were running from police, Zyed and Bouna, were electrocuted while hiding in an electric generator in the Paris suburb of Clichy-sous-Bois. A state of emergency was declared and almost 3,000 people were arrested.

Despite billions of euros in government improvement programs for the banlieues since 2005, tensions with police persist, and the deaths of other young men periodically rekindles anger. Protesters marching in solidarity with Floyd notably called for justice for Adama Traore, whose death in police custody in 2016 is still under investigation.

"The anger (in those neighborhoods) is so present and police impunity so frustrating that we don't need much for it to blow up," said Ilyes Ramdani, editor-in-chief of the Bondy Blog, which was founded in 2005 to tell the stories of young black and Arab French people in the banlieues.

Under France's strictest virus lockdown measures, from March 17-May 11, the government restricted people's movements to a kilometer (half-mile) around their homes and required that anyone leaving their homes carry a signed paper stating why. Punishments included fines starting at 135 euros (about $150), or even prison.

On the first day punishments were doled out, 10% of the fines given in the entire country were given in the region of Seine-Saint-Denis on Paris' northern edge, where unemployment is twice the national average, almost one person out of three is an immigrant, and many others are the descendants of immigrants.

Government officials defended the fines as necessary to fight the virus in a region with especially high infection rates.

But police union leader Yves Lefebvre lamented that the lockdown measures "again made the police a repressive tool."

"Public services have deserted these neighborhoods," and police are the only presence left, which "necessarily leads to confrontation," he said.

Lefebvre, general secretary for Unité SGP Police-Force Ouvrière union, said trust has been broken because "police only enter those neighborhoods to restore order."

The Villeneuve incident is being investigated by prosecutors and by the French state police watchdog agency, which said it received 166 citizen reports of problematic police behavior and seven formal complaints of police abuse during the 54 days of France's coronavirus lockdown.

Under pressure to act, Interior Minister Christophe Castaner pledged Monday to ban police chokeholds and said more officers will be equipped with cameras to help ensure that identity checks don't lead to discrimination against minorities.

Frustrated activists are taking matters into their own hands.

At the start of the lockdown, Sihame Assbague, an anti-racial profiling activist and journalist, started to collect reports of police harassment, citing "a multiplication of police violence videos on social media."

She's cross-referencing and verifying about 40 cases, most of them from videos she's received. "I don't expect much from the state or public authorities, but what I know is they respect strength. That's why it's important to organize," she said.

Amal Bentounsi, whose brother Amine was shot in the back and killed by the police in 2012, founded a group to support families of victims and provide legal help to bring abusive police to court. The officer who killed her brother was sentenced to a five-year suspended prison sentence — a rare legal victory for families like hers.

"The idea is for people to develop the habit of filming, not to make buzz, but to create a tool for citizens to contradict the police's version of events and dissuade police who will be filmed" from abusing their authority, Bentounsi said.

Users can record arrests live, and the videos are directly uploaded onto the app's server so they can be salvaged if the phone is seized or broken.

Since March, the app has been downloaded more than 30,000 times.

Their group wants to encourage people to press charges, even if chances of conviction are slim, Bentounsi said. The government says numbers of police abuses "aren't big enough for it to be an issue. We want to change that. Because if there are no charges, there are no statistics."