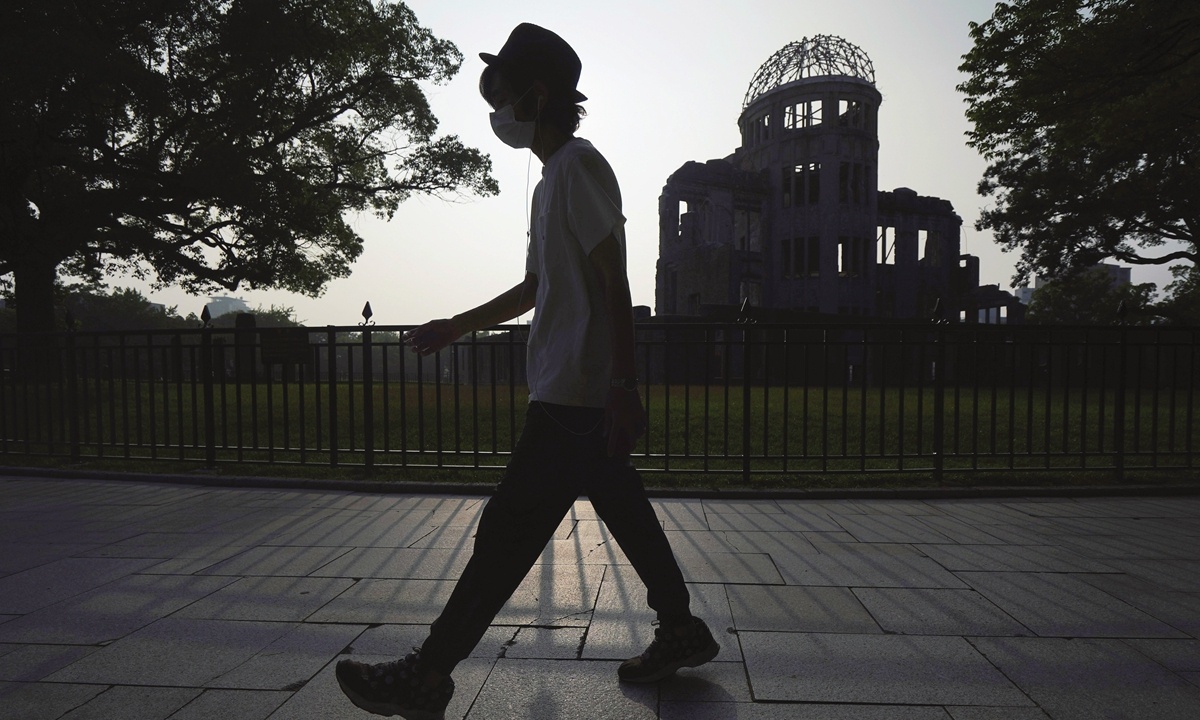 The Atomic Bomb Dome seen at dusk on August 4, 2020  in Hiroshima, western Japan, as the city of Hiroshima marks the 75th anniversary of the US atomic bombing. (Photo: agencies)

Public anger has grown after a new book revealed how the US poisoned various islands in the Pacific with toxic chemical waste that has endangered the lives of local people and seriously damaged ecosystems for decades. Chinese officials and experts have urged the US to reflect on the damage it has done and its repeated refusal to join international efforts to safeguard the environment.

The Marshall Islands, located between Hawaii and Australia, continue to be affected by US atomic tests long after some of its atolls were contaminated by nuclear waste and rendered uninhabitable for local residents as a result.

A new book, Poisoning the Pacific, written by British journalist Jon Mitchell, has detailed the US’ military use of toxic materials including radioactive waste, nerve agents, and dioxin-tainted Agent Orange across islands in the Pacific. A lot of irradiated soil has been transported and dumped on some of the islands.

The book cites 12,000 pages of documents released under the US Freedom of Information Act (FOIA) and quotes some of the island’s residents, as well as military veterans and researchers. It reveals how the US violated the human rights of local indigenous people and contaminated the ocean.

Mitchell’s book documents several attempts by the US departments of state and defense to block his work, The Guardian reported.

Runit Island in the Marshall Islands served as a massive concrete tomb for the US to dump over 70,000 cubic meters of radioactive debris, including plutonium-239, a legacy of the Cold War atomic race, the book revealed. But the site is leaking radioactive substances into the sea area, as the US department of energy has admitted, while claiming the amount is within safe limits.

After paying more than $600 million in resettlement and radiation-related treatment for affected communities over recent years, the US now refuses to pay more as it says the problem should be resolved by local governments.

A research study in 2019 by researchers at Columbia University found that the radiation level on the Marshall Islands – where the US conducted over 65 nuclear tests during the nuclear arms race – are very worrisome, as the levels are even higher than at Fukushima and Chernobyl in some areas.

Their findings showed that gamma radiation in some areas was “well above” the legal exposure limit established in agreements between the US and the Republic of the Marshall Islands, US media outlet Fox news reported.

"When solid nuclear waste is exposed to the air, it is a considerable threat to human beings. Or a nuclear leak could seep into agricultural products through groundwater and end up harming people,” Chen Zhi, an associate professor of the Department of Engineering and Applied Physics at the University of Science and Technology of China, told the Global Times on Monday.

"If the nuclear waste leaks into the ocean, it also poses a risk to the safety of fishermen and makes it more difficult to control its spread,” Chen said.

Similarly, residents of Guam in the Western Pacific were also victims of US poisoning, as the US used the area to store a large amount of Agent Purple, a powerful herbicide and defoliant used by the US military during the Vietnam War. The poisoning is believed to have caused higher incidences of infant death and birth defects, according to a report in 2015.

Mitchell’s book also disclosed how a US soldier in Guam who was asked to spray Agent Orange around the base got skin inflammation and later suffered from Parkinson's syndrome and ischemic heart disease, while his daughter got cancer.

Exposure to high levels of radiation can cause skin burns and acute radiation syndrome, and other long-term health problems, according to the US Environmental Protection Agency.

Poisoned land has pushed several waves of population evacuations. Local government leaders said the impact of the nuclear explosion was not only harmful to the four ring islands the US has recognized, but also a number of other islands in the country. Local politicians criticized the weak compensation of the US and urged it to clean up the mess.

"The US famously fails to actually lead the world in anything desirable, but it does lead the world in many things, and one of them turns out to be the poisoning of the Pacific and its islands,” a Twitter user called Mats Nilsson commented.

"The vast Pacific Ocean is supposed to be a blessing for the people of this region. It is not a place for the US military to test its poison and dump its waste,” Chinese Foreign Ministry spokesperson Zhao Lijian said at a press meeting on October 14.

"Examples abound of how the US shirks its responsibility for environmental protection and destroys the global ecological environment,” said Zhao, adding that the US’ refusal to join international conventions for protecting the environment has set up “obstacles to the global management of plastic waste.”

The US has also “dumped huge amounts of waste in developing countries, which has done a lot of harm to the local and global environment,” said Zhao.

"There would definitely be a serious political storm in the US if the Marshall Islands nuclear problems affected American citizens. The US decision has always been rooted in its own self-interest rather than global responsibility,” Yang Xiyu, a senior research fellow at the China Institute of International Studies in Beijing, told the Global Times on Monday.

"Since the global rules have become more mature to resolve transnational nuclear security issues, the crisis in Marshall Islands would not be difficult to solve if the US treated the citizens of the Marshall Islands fairly and complied with international rules,” said Yang.