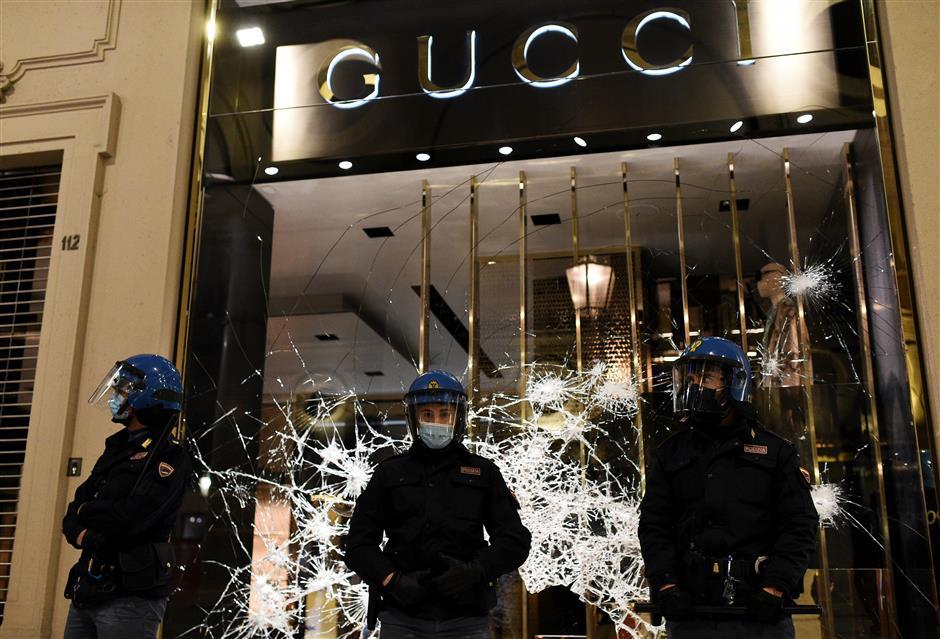 Italian police officers stand in front of a shattered Gucci store window during a protest against new restriction measures to curb the spread of COVID-19 in downtown Turin on Monday. (Photo: Agencies)

Protests flared in Turin, Milan and other Italian cities and towns on Monday against a new round of government restrictions that force restaurants and cafes to close early and shutter cinemas, gyms and other leisure venues.

Following weekend demonstrations that saw violence in Italy, crowds ranging in size from several hundred to several thousand took to the streets again on Monday evening.

In the northern city of Turin, witnesses said a number of luxury stores, including a Gucci fashion shop, were ransacked in city center as crowds of youths took to the streets after nightfall, letting off huge firecrackers and lighting colored flares.

Some demonstrators broke off from a peaceful protest, smashing store windows on an elegant shopping street, setting smoke bombs and hurling bottles at police in a main city square.

Police responded with tear gas to clear the protesters in Piazza del Castello.

On that same square hours earlier, some 300 taxis peacefully lined up in neat rows to draw attention to their economic losses from the implosion of tourism and disappearance of workers from the city center as they do their jobs remotely during the pandemic.

There were also clashes in Milan, the capital of the neighboring Lombardy region, an area that has borne the brunt of the coronavirus pandemic in Italy.

Smaller cities, including Catania in Sicily, and towns also saw protests on Monday.

In Cremona, a town in northern Lombardy, restaurant owners turned out in front of the local interior ministry’s office.

After banging pots and bans, they left them piled up in the street to highlight their economic woes worsened by the latest early-shutdown decree.

The scenes of unrest came after Italian Prime Minister Giuseppe Conte on Sunday ordered restaurants and bars to shut from 6pm, while theaters, cinemas and gyms were ordered closed for a month — much to the annoyance of business owners, opposition politicians and even some scientists.

A day before, the country registered more than a half million confirmed coronavirus cases since the outbreak.

Conte told citizens on Monday that he hoped the new restrictions “will allow us to be more relaxed by Christmas,” but warned “hugging and partying” would remain out of the question.

Restaurant and bar owners were not satisfied.

Since most Italians don’t dine out before 7:30pm at the earliest, the decree effectively wiped out most of the restaurants’ already reduced revenue in the pandemic.

Far-right opposition leader Matteo Salvini said he was preparing a legal challenge, but the World Health Organization’s adviser to Rome Walter Ricciardi said the new rules may “not be enough” to stop the virus.

Looking to calm tensions, the government has said it would present a package of measures to support businesses hurt by the new restrictions.

Italy, once the country hardest hit by the coronavirus pandemic in the industrialized world, has been overtaken by others in Europe including France and Britain.

But infection rates have been rebounding rapidly since the start of October.