WORLD Angry worshippers lash out against Trump across Muslim world

Angry worshippers lash out against Trump across Muslim world

Large crowds of worshippers across the Muslim world staged anti-US marches Friday, some stomping on posters of Donald Trump or burning American flags in the largest outpouring of anger yet at the US president’s recognition of bitterly contested Jerusalem as Israel’s capital.

In the holy city itself, prayers at Islam’s third-holiest site dispersed largely without incident, but Palestinians clashed with Israeli troops in several dozen West Bank hotspots and on the border with the Gaza Strip.

Dozens of Palestinians in the West Bank and Gaza were hit by live rounds or rubber-coated steel or inhaled tear gas, the officials said.

Later Friday, the Israeli military said its Iron Dome missile-defense system intercepted a rocket fired from Gaza into southern Israel, but no injuries were reported.

Trump’s pivot on Jerusalem triggered warnings from America’s friends and foes alike that he is needlessly stirring more conflict in an already volatile region. 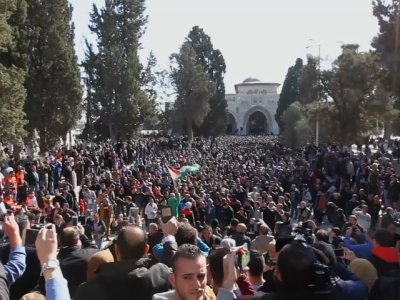 Muslim faithful prayed in the compound of the Al Aqsa mosque in Jerusalem on Friday amid heightened tension. Photo: AP

The religious and political dispute over Jerusalem forms the emotional core of the Israeli-Arab conflict. The ancient city is home to major Muslim, Jewish and Christian shrines and looms large in the competing national narratives of Israelis and Palestinians.

Trump’s decision on Jerusalem is widely seen in the region as a blatant expression of pro-Israel bias, but it was unclear if protests and confrontations would maintain momentum after Friday. More extensive violence has erupted in the Palestinian areas in the past, including deadly bloodshed triggered by disputes over Jerusalem.

Palestinian President Mahmoud Abbas’ Fatah movement and other groups had called for three “days of rage” this week. However, Abbas remains an opponent of violence, saying it’s counterproductive and that he might at some point order his security forces to contain protests.

Separately, Fatah’s rival, the Gaza-based Islamic militant Hamas, called this week for a third uprising against Israel, but such appeals have fizzled as Palestinians become more disillusioned with their leaders.

On Friday, demonstrators in the West Bank torched heaps of tires, sending columns of thick black smoke rising over the cities of Ramallah and Bethlehem. Palestinian stone-throwers traded volleys in the streets with soldiers firing tear gas and rubber bullets. Along the Gaza-Israel border fence, Israeli troops fired at stone-throwers.

Across the region — from Asia’s Indonesia, Malaysia and Pakistan to North Africa’s Algeria and Lebanon in the Levant — thousands of worshippers poured into the streets after midday prayers to voice their anger. Some protesters burned US and Israeli flags or stomped Trump posters that showed the president alongside a Nazi swastika.