UNITED NATIONS, Sept. 21 (Xinhua) -- As this year marks the 75th anniversary of the founding of the United Nations, the annual VIP-laden general debate of the General Assembly (GA) shall be different. Indeed, it is. 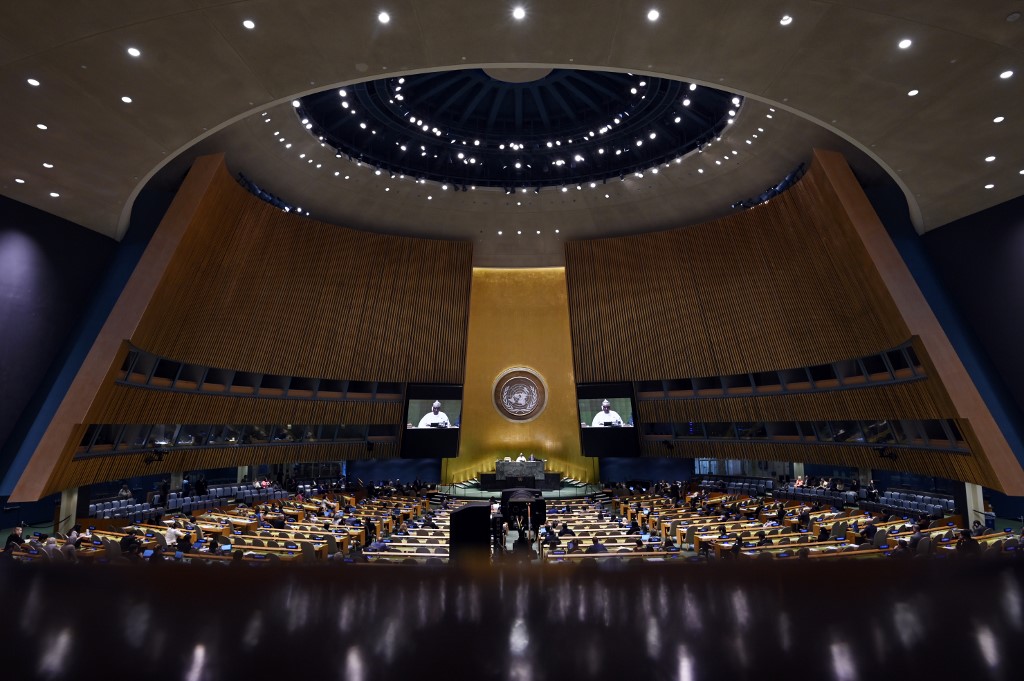 Officials said they expected not many more than 200 delegates in the great hall that usually hosts about 2,500, including standees, at the opening of the six-day marathon of speeches.

"The COVID-19 pandemic is a crisis unlike any in our lifetimes, and so this year's General Assembly session will be unlike any other, too," UN Secretary-General Antonio Guterres told reporters last week. "We have a full program and the stakes could not be higher."

"Our world is nearing the grimmest of milestones: 1 million lives lost to the virus," he said.

Back in March, Guterres called for a global COVID ceasefire. He intends to renew that appeal when he speaks on Tuesday.

The secretary-general hopes for global peace by the end of the year.

"In Syria, Libya, Ukraine and elsewhere, cease-fires or standstills in the fighting can create space for diplomacy," he said. "In Yemen, we are pressing for a cease-fire, confidence-building measures and resumption of the political process. But across these and other crises, spoilers are active; distrust is deep. We must persevere."

Other topics facing the six-day session include the toll on the effort to eradicate poverty taken by COVID-19, the damage the virus has inflicted on the Sustainable Development Goals, climate change, gender equality and the future of multilateralism.

This year, it is a virtual event with no VIPs escorted to the dark green marble podium, instead with technicians pushing the "play" button on pre-recorded remarks. The suggested length is 15 minutes, but it is frequently ignored.

Each of the 193 member states of the United Nations has a desk and seats for six delegates in the hall. But only one delegate is allowed to attend from each state and that delegate, expected to be from the country's permanent mission in New York, may introduce the speaker of their nation.

At the end of each session, delegates have the right to reply to statements they take issue with from their seat. However, a head of state's statement may only be replied to in writing.

With so few in seats, the look inside the cavernous hall promises to be rather barren, expecting to reflect the look outside the UN Headquarters complex on the banks of the East River in Manhattan's Turtle Bay neighborhood.

Instead of crowds heading to the General Assembly, with access severely limited on nearby streets leading to headquarters and traffic on avenues tightly controlled, it is expected to be nearly a business-as-usual atmosphere in a usually hectic city still recovering from a hard hit of COVID-19.

No massive white police concrete blocks, no swarms of federal and state law enforcement agents, and no police and UN security officers manning barricades and checkpoints.

Gone are the extra in-person and video surveillance teams, the phalanx of television network transmission trucks -- it's all online now.

UN officials have been receiving the recorded speeches -- they asked them to be in-house four days in advance -- and last week the White House announced U.S. President Donald Trump would not be coming to the session he earlier had pledged to attend.

The advance time limit was set to allow members of the Secretariat to test and translate the recordings.

The 75th session of the General Assembly opened on Sept. 15, while the world leaders' high-level general debate opens on Tuesday.

Bozkir said to ensure a voice for the world's most vulnerable people, he would attempt to consolidate trust and cohesion among countries, major groups at the United Nations, and within international organizations.

"The context in which we are working serves to remind us of the necessity of the multilateral system and inspires us all to make full use of the UN Charter to address our collective challenges," he said at the opening of the new session.

Among the meetings he is expected to helm during his year in office will be the 25th anniversary of the Fourth World Conference on Women, a high-level plenary meeting to commemorate and promote the International Day for the Total Elimination of Nuclear Weapons and the Biodiversity Summit.

Two General Assembly special sessions, one on the COVID-19 pandemic, the first special session convened to discuss a pandemic, as well as one against corruption, will also be held during the 75th year.