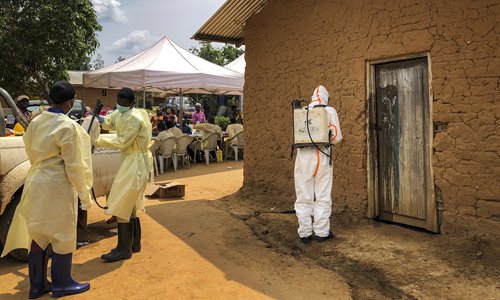 A worker from the World Health Organization (WHO) decontaminates the doorway of a house where two cases of Ebola were found, in the village of Mabalako, Congo on Monday. (Photo: IC)

A radio host who helped spread the word in the fight against Ebola has been stabbed to death at his home in northeast Democratic Republic of Congo, the army said Sunday.

The motive for the murder in the town of Lwemba in the troubled Ituri region was unknown, but it came as health authorities were set to introduce a new vaccine against the disease in unaffected areas.

The attackers killed 35-year-old Papy Mumbere Mahamba and wounded his wife before burning down their home late Saturday, General Robert Yav, the commander of Congolese army forces in the Ituri town of Mambasa, told AFP.

Professor Steve Ahuka, the national coordinator of the fight against Ebola, confirmed a local worker in Lwemba had been killed.

A journalist at Radio Lwemba, the local radio station where Mahamba worked, also confirmed the details.

"Our colleague Papy Mumbere Mahamba was killed at his home by unknown attackers" who stabbed him to death, Jacques Kamwina told AFP.

The Observatory for Press Freedom in Africa (OLPA), based in the DRC, called on the Ituri authorities to conduct a "serious investigation" into the murder.

The highly contagious hemorrhagic fever has so far killed 2,185 people, according to the latest official figures.

Efforts to roll back the epidemic have been hampered not only by fighting but also by resistance within communities to preventative measures, care facilities, and safe burials.

It is the DRC's 10th Ebola epidemic and the second deadliest on record after an outbreak that struck West Africa in 2014-16, claiming more than 11,300 lives.

A Cameroonian doctor from the World Health Organization (WHO), Richard Valery Mouzoko Kiboung, was shot dead in April in an attack on a hospital in North Kivu province.

A nurse and a police officer were killed in similar circumstances since the start of the epidemic.

In September, militiamen torched around 20 homes of health workers fighting Ebola in the area around Mambasa.

The WHO has warned violence undermines the fight against Ebola, notably impeding safe burials of the highly contagious bodies and the administering of vaccines.

Funerals can become "super-spreading events" with up to 70 people infected in a single ceremony, according to the International Federation of Red Cross and Red Crescent Societies (IFRC).