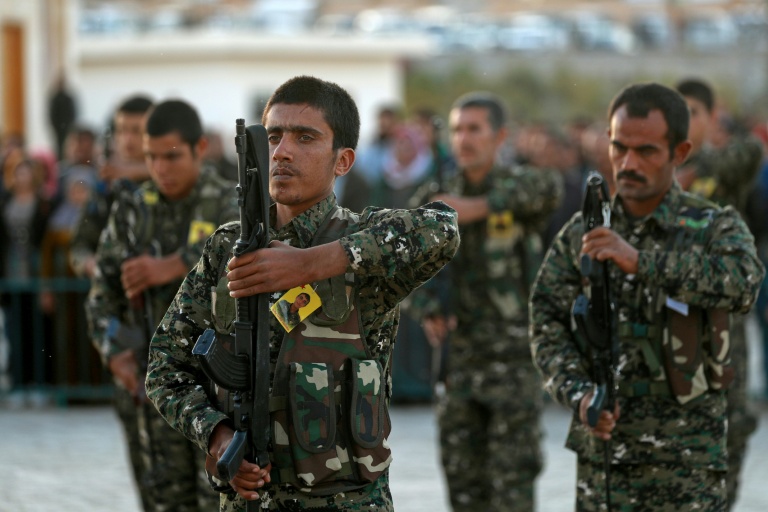 Members of the US-backed SDF attend a funeral on November 6, 2018 for a fellow fighter killed in battle against the Islamic State group. (Photo: AFP)

Elsewhere, regime forces retook the last IS foothold in the country's south when the jihadists withdrew into the desert after months of fighting, the Britain-based Syrian Observatory for Human Rights said.

More than seven years into Syria's grinding civil war multiple forces are battling to push IS out of its remaining scraps of territory in the conflict-wracked country.

A US-backed alliance of Kurdish and Arab fighters is seeking to expel the jihadists from a pocket of land in the Deir Ezzor province near the Iraqi border.

The Observatory has reported dozens of civilians killed in air strikes since the offensive was launched in September, although the coalition has repeatedly said it does its utmost not to hit civilians.

Another seven victims had not yet been identified as either civilians or IS fighters, it said.

"It's the highest death toll in coalition air strikes since the Syrian Democratic Forces (SDF) launched its attack against the IS pocket" in September, Observatory chief Rami Abdel Rahman said.

A spokesman for the US-led coalition confirmed strikes in the area of Abu Husn, but said they had not harmed any non-combattants.

"No civilian casualties are associated with the strikes in question," spokesman Sean Ryan told AFP.

The SDF in September announced an assault to oust the jihadists from the eastern holdout, which includes the town of Hajin and the village of Al-Shaafa.

The offensive was slowed by a fierce IS fightback and then briefly put on hold to protest Turkish shelling of Kurdish militia positions in northern Syria.

"There has been an advance on the ground in the past days but it is a careful advance due to fields of landmines, trenches, tunnels and barricades set up by IS," he told AFP.

Since 2014, the Us-led coalition has acknowledged direct responsibility for over 1,100 civilian deaths in Syria and Iraq, but rights groups put the number killed much higher.

IS overran large swathes of Syria and neighbouring Iraq in 2014, proclaiming a "caliphate" in land it controlled.

But the jihadist group has since lost most of it to various offensives in both countries.

In the south of Syria on Saturday, regime forces took the last patch of ground held by IS, the Observatory said.

Pro-government troops regained control of Tulul al-Safa, between the provinces of Damascus and Sweida, "after IS fighters withdrew from it and headed east into the Badia desert", it said.

The regime has been fighting the jihadists in the area since a deadly July attack on the Druze minority in Sweida province.

In recent weeks, air strikes on the Tulul al-Safa pocket had increased and hundreds of regime fighters were sent as reinforcements, the Observatory said.

The jihadists' withdrawal was likely "under a deal with the regime forces" after weeks of encirclement and air raids, Observatory chief Rami Abdel Rahman said.

State news agency SANA reported regime forces had made "a great advance in Tulul al-Safa" and said they were combing the area for any remaining jihadists.

In the July 25 attack, IS killed more than 250 people, most of them civilians, in a wave of suicide bombings, shootings, and stabbings across Sweida province in the bloodiest assault on the Druze community of the war.

Followers of a secretive offshoot of Islam, the Druze are considered heretics by the Sunni extremists of IS.

Syria's war has killed more than 360,000 people since it erupted in 2011 with the brutal repression of anti-government protests.