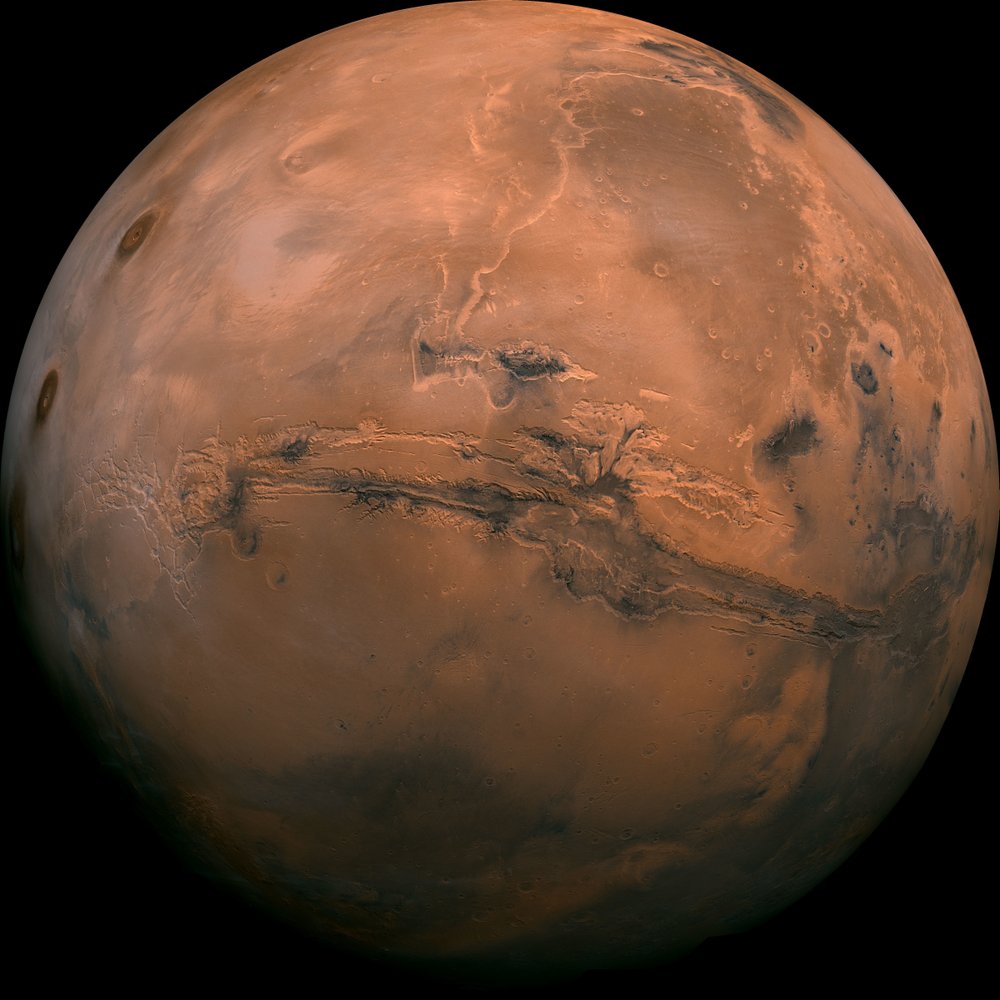 This composite photo of Mars was created from over 100 images taken by Viking orbiters in the 1970s. (Photo: AP)

A NASA spacecraft’s six-month journey to Mars neared its dramatic grand finale Monday in what scientists and engineers hoped would be a soft precision landing on flat red plains.

The InSight lander aimed for an afternoon touchdown, as anxiety built among those involved in the $1 billion international effort.

InSight’s perilous descent through the Martian atmosphere, after a trip of 300 million miles (482 million kilometers), had stomachs churning and nerves stretched to the max. Although an old pro at this, NASA last attempted a landing at Mars six years ago.

The robotic geologist — designed to explore Mars’ mysterious insides — must go from 12,300 mph (19,800 kph) to zero in six minutes flat as it pierces the Martian atmosphere, pops out a parachute, fires its descent engines and, hopefully, lands on three legs.

“Landing on Mars is one of the hardest single jobs that people have to do in planetary exploration,” noted InSight’s lead scientist, Bruce Banerdt. “It’s such a difficult thing, it’s such a dangerous thing that there’s always a fairly uncomfortably large chance that something could go wrong.”

Earth’s success rate at Mars is 40 percent, counting every attempted flyby, orbital flight and landing by the U.S., Russia and other countries dating all the way back to 1960.

But the US has pulled off seven successful Mars landings in the past four decades. With only one failed touchdown, it’s an enviable record. No other country has managed to set and operate a spacecraft on the dusty red surface.

It’s shooting for Elysium Planitia, a plain near the Martian equator that the InSight team hopes is as flat as a parking lot in Kansas with few, if any, rocks. This is no rock-collecting expedition. Instead, the stationary 800-pound (360-kilogram) lander will use its 6-foot (1.8-meter) robotic arm to place a mechanical mole and seismometer on the ground.

The self-hammering mole will burrow 16 feet (5 meters) down to measure the planet’s internal heat, while the ultra-high-tech seismometer listens for possible marsquakes. Nothing like this has been attempted before at our smaller next-door neighbor, nearly 100 million miles (160 million kilometers) away.

No experiments have ever been moved robotically from the spacecraft to the actual Martian surface. No lander has dug deeper than several inches, and no seismometer has ever worked on Mars.

By examining the deepest, darkest interior of Mars — still preserved from its earliest days — scientists hope to create 3D images that could reveal how our solar system’s rocky planets formed 4.5 billion years ago and why they turned out so different. One of the big questions is what made Earth so hospitable to life.

Mars once had flowing rivers and lakes; the deltas and lakebeds are now dry, and the planet cold. Venus is a furnace because of its thick, heat-trapping atmosphere. Mercury, closest to the sun, has a surface that’s positively baked.

The planetary know-how gained from InSight’s two-year operation could even spill over to rocky worlds beyond our solar system, according to Banerdt. The findings on Mars could help explain the type of conditions at these so-called exoplanets “and how they fit into the story that we’re trying to figure out for how planets form,” he said.

Concentrating on planetary building blocks, InSight has no life-detecting capability. That will be left for future rovers. NASA’s Mars 2020 mission, for instance, will collect rocks for eventual return that could hold evidence of ancient life.

Because it’s been so long since NASA’s last Martian landfall — the Curiosity rover in 2012 — Mars mania is gripping not only the space and science communities, but everyday folks.

Viewing parties are planned coast to coast at museums, planetariums and libraries, as well as in France, where InSight’s seismometer was designed and built. The giant NASDAQ screen in New York’s Times Square will start broadcasting NASA Television an hour before InSight’s scheduled 3 p.m. EST touchdown; so will the National Air and Space Museum’s Udvar-Hazy Center in Chantilly, Virginia, and the Denver Museum of Nature and Science. The InSight spacecraft was built near Denver by Lockheed Martin.

But the real action, at least on Earth, will unfold at NASA’s Jet Propulsion Laboratory in Pasadena, California, home to InSight’s flight control team. NASA is providing a special 360-degree online broadcast from inside the control center.

Confirmation of touchdown could take minutes — or hours. At the minimum, there’s an eight-minute communication lag between Mars and Earth.

A pair of briefcase-size satellites trailing InSight since liftoff in May will try to relay its radio signals to Earth, with a potential lag time of under nine minutes. These experimental CubeSats will fly right past the red planet without stopping. Signals also could travel straight from InSight to radio telescopes in West Virginia and Germany. It will take longer to hear from NASA’s Mars orbiters.

Project manager Tom Hoffman said Sunday he’s trying his best to stay outwardly calm as the hours tick down. Once InSight phones home from the Martian surface, though, he expects to behave much like his three young grandsons did at Thanksgiving dinner, running around like crazy and screaming.

“Just to warn anybody who’s sitting near me ... I’m going to unleash my inner 4-year-old on you, so be careful,” he said.