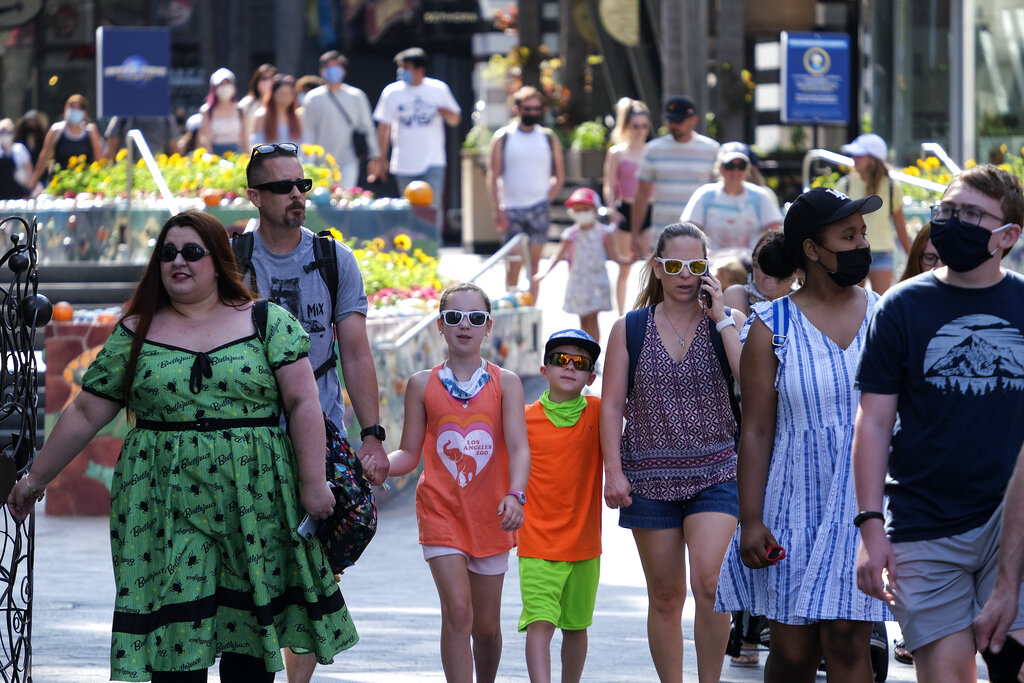 Many Americans are relaxing precautions taken during the COVID-19 pandemic and resuming everyday activities, even as some worry that coronavirus-related restrictions were hastily lifted, a new poll shows.

The poll from The Associated Press-NORC Center for Public Affairs Research finds that majorities of Americans who were regularly doing so before the pandemic say they are returning to bars or restaurants, traveling and attending events such as movies or sports.

Just 21% are very or extremely worried about a COVID-19 infection in their inner circle — the lowest level since the pandemic began — and only 25% are highly concerned that the lifted restrictions will lead to additional people being infected in their community.

Andrea Moran, a 36-year-old freelance writer and mother of two boys, said she feels both relief and joy at the chance to resume “doing the little things,” such as having drinks on a restaurant patio with her husband.

“Honestly, I almost cried,” Moran said. “It’s such a feeling of having been through the wringer, and we’re finally starting to come out of it.”

Still, 34% of Americans think restrictions in their area have been lifted too quickly, while somewhat fewer — 27% — say they were not lifted quickly enough. About 4 in 10 rate the pace of reopening about right.

The way Americans approached their daily lives suddenly changed after COVID-19 spread through the U.S. in early 2020. Following the advice of health officials and governments, people isolated in their homes — either alone or with families — to avoid exposure to the virus, which has sickened more than 33 million people and killed 600,000 people in the U.S.

During the height of the pandemic, restaurants, movie theaters and stores either closed or continued operating with limited occupancy; church services, schools and government meetings went virtual; and many employers made working from home an option or a requirement. Mask wearing in public became the norm in most places, with some states and cities making it mandatory.

The emergence of the vaccine has helped slow down rates of infection and death, allowing state and local economies to reopen and leading Americans to return to activities they once enjoyed.

The Centers for Disease Control and Prevention advised last month that vaccinated Americans don’t have to wear a mask in most scenarios, indoors or out. The latest CDC data shows 53% of all Americans — 65% of those 18 and older — have received at least one dose of the vaccine.

According to the AP-NORC poll, American adults who have not yet rolled up their sleeves for the shot remain hesitant to do so. Just 7% of those who have not been vaccinated say they definitely will get a COVID-19 vaccine, and 15% say they probably will.

Forty-six percent of Americans who have not been vaccinated say they will definitely not get a vaccine, and 29% say they probably will not. Young adults, Americans without a college degree, white evangelicals, rural Americans and Republicans are most hesitant to get vaccinated.

The poll finds many Americans are still wearing masks and taking precautions to avoid contact with other people, but the percentage of those doing so is down significantly from just a few months ago.

In late February, 65% said they were always wearing a mask around people outside their households. Now, just 37% say so, though 19% say they often wear one.

Forty percent of Americans say they are extremely or very likely to wear a mask when participating in indoor activities outside their homes, while just 28% say the same about outdoor activities.

Aaron Siever, 36, of New Market, Virginia, said he and his wife have consistently worn masks and taken other precautions, including getting vaccinated. But Siever said virus-related restrictions were not lifted quickly enough, lamenting that some precautions were politicized and caused an “inherent panic.”

“I think with masks being worn and people getting vaccinated, I think we could have opened a little earlier,” said Siever, who maintains the grounds of Civil War battlefields in Virginia. “We started focusing on the politics of reopening, rather than the health.”

Now that most states have lifted restrictions, the poll finds about two-thirds of Americans who used to travel at least monthly say they will do so in the next few weeks. About three-quarters of frequent restaurant or bar-goers before the pandemic say they will now return. A year ago, only about half said they would travel or go to restaurants if they could.

Likewise, more are returning to activities such as visiting friends and family, seeing movies or concerts, attending sporting events and shopping in-person for nonessential items.

In Cookeville, Tennessee, Moran said her family still regularly wears masks in public, especially when they are indoors or around a lot of people. Both she and her husband have been vaccinated. Moran said she has eaten at outdoor restaurants, but she is avoiding indoor dining.

“Even if the air conditioning circulation is good, I just don’t feel comfortable right now going inside, where there’s a lot of people in fairly close proximity who I don’t know,” Moran said.

Moran said her family avoided nonessential travel during the height of the pandemic, canceling a trip to see her brother in Fort Lauderdale, Florida. But last weekend, the family traveled for the first time in more than a year — a roughly 3 1/2-hour road trip to Asheville, North Carolina, to visit a childhood friend.

“I felt a little bit nervous just because being around people is such a surreal thing after so long,” Moran said. “I was really excited and I was thrilled for my kids that they were able to get out and get back to some semblance of normality.”