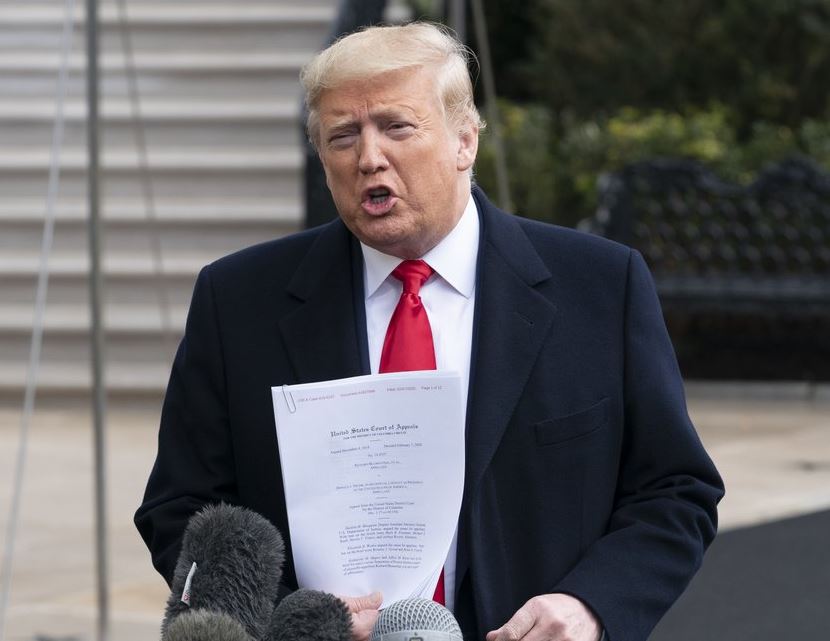 President Donald Trump speaks to reporters before boarding Marine One at the White House in Washington, Friday, Feb. 7, 2020, for the short flight to Andrews Air Force Base, Md., and then on to Charlotte, NC. (Photo: AP)

A federal appeals court in Washington on Friday dismissed one of several ongoing lawsuits charging that President Donald Trump has illegally profited off the presidency.

The lawsuit had charged that the president violated the US Constitution’s emoluments clause by accepting benefits to his businesses from foreign governments without congressional approval. A lower court had allowed the lawsuit to go forward.

Trump, speaking to reporters on the South Lawn of the White House on Friday, held a copy of the decision and called it a “total win” on “another phony case.”

The 12-page opinion is unsigned. But in it, the panel of judges that heard the case wrote that the 29 senators and 186 members of the House of Representatives involved in the lawsuit “do not constitute a majority of either body” of Congress and therefore don’t have the power to bring the lawsuit.

The three judges that heard the case were Karen LeCraft Henderson and Thomas Griffith, who were nominated to the bench by Republican Presidents George H.W. Bush and George W. Bush, respectively, and David Tatel, who was nominated by a Democrat, Bill Clinton.

The lawsuit is one of several that have charged the president violated the emoluments clause.

A federal appeals court in Virginia recently heard arguments in a separate lawsuit in which the state of Maryland and the District of Columbia accuse Trump of violating the clause by accepting profits through foreign and domestic officials who stay at the Trump International Hotel in Washington. In that case, a judge in Maryland allowed the lawsuit to go forward, but a three-judge panel of the US Court of Appeals for the 4th Circuit threw the case out. The full appeals court re-heard the case in December, but it has not yet issued its ruling.

Last year, in New York, a federal appeals court revived another emoluments clause case filed by Citizens for Responsibility and Ethics in Washington and others after a lower court dismissed that lawsuit. The Trump administration has asked the full US Court of Appeals for the 2nd Circuit to re-hear the case.