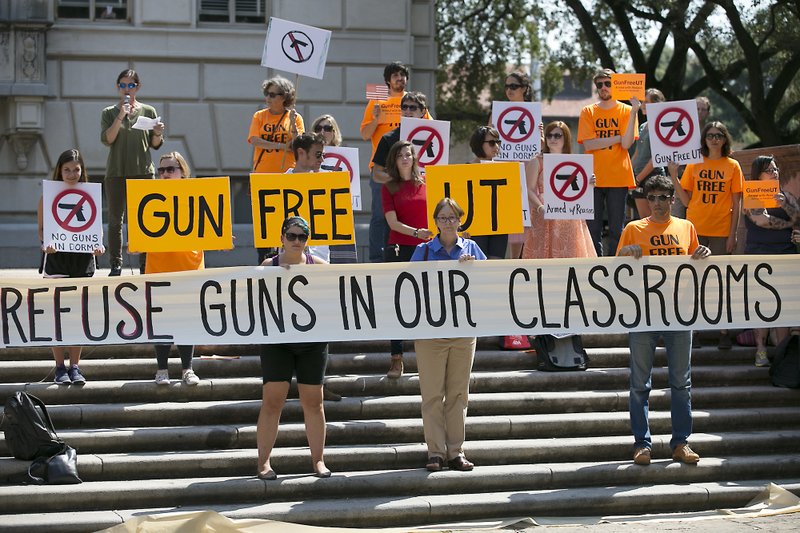 Attorneys for three University of Texas professors asked a federal appeals court Wednesday to revive their challenge of a law allowing people with concealed-handgun licenses to carry weapons on public university campuses.

Two of the professors, Lisa Moore and Mia Carter, were on the front row as a three-judge panel of the 5th US Circuit Court of Appeals in New Orleans heard the arguments.

Last year, a federal judge in Texas dismissed the suit. US District Judge Lee Yeakel said Moore, Carter and Jennifer Glass offered “no concrete evidence” to substantiate concerns that having armed students in their classroom would have a “chilling effect” on the fee exchange of ideas.

Yeakel said that, because they failed to clearly show they were harmed by the law, they had no legal standing to pursue the suit.

Jason LaFond, arguing for the Texas Solicitor General’s Office, said Yeakel’s ruling should stand. He argued that the subjective fear of a student bringing a gun to the classroom doesn’t give them standing to challenge the law, he said.

“Lots of people fear flying,” LaFond told the panel. “That doesn’t mean it’s reasonable to think that a plane is going to crash.”

Renea Hicks, arguing for the professors, said they should have the freedom to control their classroom. And, he said, the law denies the professors the right to take steps against a very real danger. He mentioned campus shootings in Texas, Florida and Virginia Tech.

“We’re not asking for government protection. We’re asking for self-protection,” Hicks said. “The government won’t let them protect themselves” by banning guns from their classrooms.

He also said national studies and the views of national professional organizations, including the American Association of University Professors, attest to the harm guns in a classroom can do to academic freedom.

Judges Carolyn Dineen King, Leslie Southwick and James Ho heard the arguments. Ho appeared skeptical of Hicks’ arguments, questioning whether the law could be challenged because fear of guns might squelch free speech at a public park.

There was no indication when the appellate judges would rule.