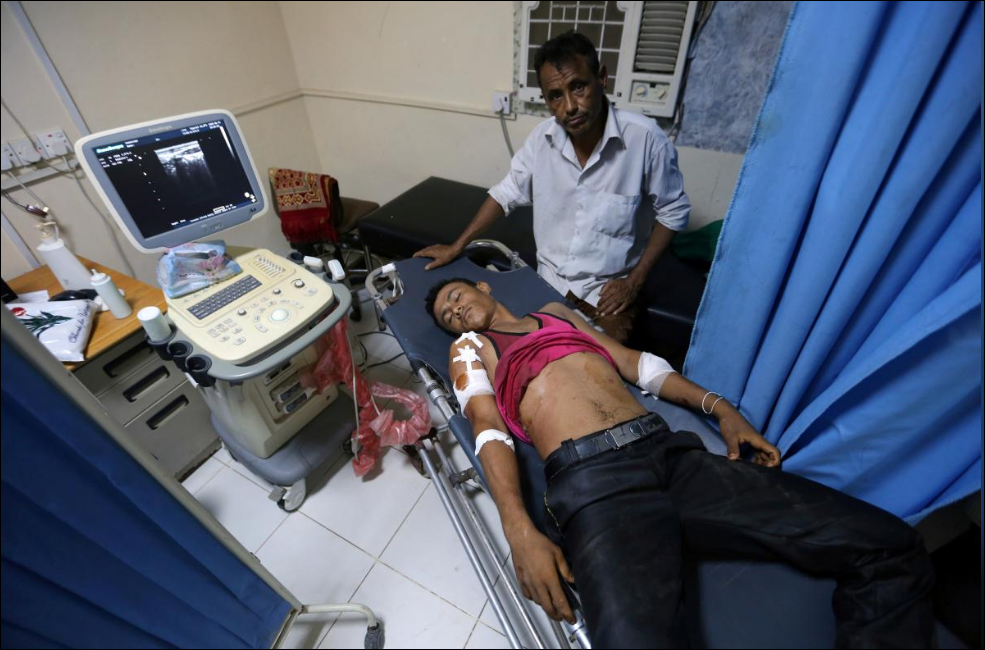 A man stands by a relative, injured in clashes between government forces and Houthi fighters near Hodeidah, Yemen June 15, 2018. (Photo: Reuters)

Yemen’s Iran-aligned Houthi movement fought on Saturday to keep a Saudi-led coalition from taking full control of the airport in the port city of Hodeidah, in an offensive the U.N. says could trigger a famine imperiling millions of lives.

The alliance, led in the Hodeidah assault by the United Arab Emirates, is attempting to capture the well-defended city and push the Houthis out of their sole Red Sea port, in the biggest battle of the war.

“Death and poverty are all around us. We are scared to leave our homes after the fighting reached the airport,” Abdelqader, who used to work at a cement plant, said by telephone from Hodeidah. “No work, no salary, we are just waiting for God’s mercy.”

Ground troops including Emiratis, Sudanese and Yemenis from various factions have surrounded the main airport compound but have not seized it, a source in the coalition-allied Yemeni military and residents said.

Houthi spokesman Mohammed Abdul-Salam said Saudi-led forces had not entered Hodeidah airport and warned the assault on the city would undermine chances for a peaceful settlement.

“A battle of attrition awaits the Saudi alliance which it cannot withstand. The Saudi coalition will not win the battle in Hodeidah,” he told Lebanon-based al-Mayadeen TV.

Martin Griffiths, the U.N. special envoy to Yemen, arrived in the Houthi-held capital Sanaa as fears grew that the fighting will sever the only lifeline to the vast majority of Yemenis.

The battle for Hodeidah could have ramifications far beyond the densely-populated city of 600,000. Yemen’s conflict is part of a regional proxy war between Saudi Arabia and Iran.

U.S. President Donald Trump’s withdrawal from Iran’s nuclear deal and his embrace of nuclear state North Korea have added to Tehran’s isolation and put pressure on the Islamic Republic to preserve its interests in Yemen and other Arab states.

Fighting closed off the city’s northern exit, blocking a key route east to Sanaa and making it harder to transport goods from Yemen’s biggest port to mountainous regions.

Houthis rule the most populous areas of chronically unstable Yemen, a poor nation of about 30 million people. More than 10,000 people have died in the war that began in 2015.

Aly Omar and his family spent three days trapped in the Manzar neighborhood abutting the airport as fighting raged.

“We didn’t have any food, or drink or anything, not even water,” Omar said, standing in a hospital on Friday night beside his wounded son.

“I treated him on a bus after he was injured in an air strike ... I call on the United Nations and the Red Cross to open a way for us to get out of the situation we’re in. Our kids, women and elderly are stuck.”

Aid groups are failing to cope in Yemen, where around 22 million people depend on humanitarian assistance and 8.4 million are at risk of starvation.

“Humanitarian agencies cannot currently access areas south of the city where people are most likely to have been injured, affected and displaced, leaving us without a clear picture of needs,” said the Norwegian Refugee Council’s office in Yemen.

The Arab alliance, which launched the operation in Hodeidah four days ago, said it can take the city quickly enough to avoid interrupting aid and would focus on capturing the airport and port and avoid street fighting.

Lise Grande, the United Nations humanitarian coordinator in Yemen, has warned that in a worst-case scenario, up to 250,000 lives are at risk.

“We suffer enough from poverty and lack of electricity and water,” Hodeidah resident Ibrahim Shouey, 53, a fisherman, said by telephone.

“The sound of fighting is distant, but the sounds of strikes by warplanes and warships has terrified us and our children. We don’t know where to run to. We don’t want the war to reach the city center.”

Riyadh has accused the Houthis of using the port to smuggle Iranian-made weapons, including missiles used to target Saudi cities — accusations denied by the group and Tehran.

If the Hodeidah fighting drags on, causing big coalition casualties and an outcry over a humanitarian catastrophe, it may work in the Houthis’ favor. If the Houthis are driven out, the coalition could get the upper hand in the war.

The alliance has superior weaponry, including fighter planes. The Houthis, resilient and highly experienced in mountain warfare, have advanced on sandal-shod feet and by pickup truck in battles across Yemen.

Human rights groups criticize the United States and other Western powers who have provided arms and intelligence to the Arab alliance over coalition air strikes that have led to hundreds of civilian deaths.

French special forces are on the ground in Yemen with the UAE forces, French newspaper Le Figaro reported on Saturday.

The coalition intervened in Yemen in 2015 to restore the internationally recognized government in exile and thwart what Riyadh and Abu Dhabi see as efforts by arch-foe Iran to dominate the region.

Even if the Houthis are defeated in Hodeidah, securing peace would be a messy, arduous process. The civil war is complicated by other parties, including loyalists of the late President Ali Abdullah Saleh, southern separatists and Al Qaeda.