Are Taliban ready to resume talks after Trump's Afghanistan visit? 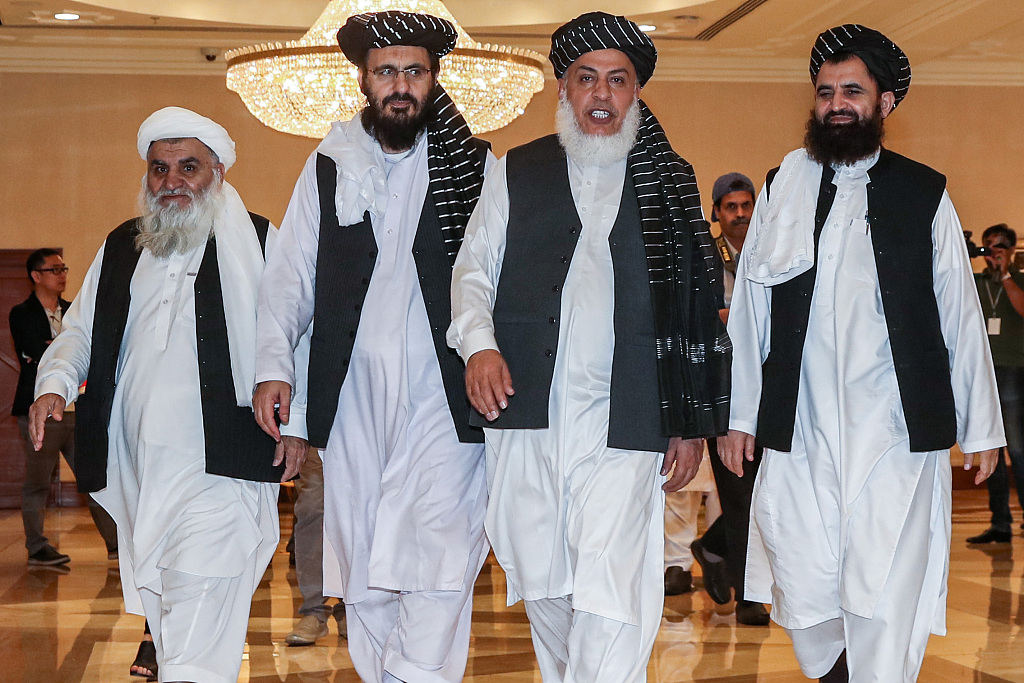 After US President Donald Trump's Thanksgiving visit to Afghanistan, conflicting reports emerged on Friday regarding the Taliban's attitudes on when to resume peace talks with the United States.
Trump said on Thursday that the US was again meeting with the militants.
According to a report by Al Jazeera, the group confirmed that some preliminary meetings have taken place in Qatar's capital Doha, which could pave the way for the resumption of formal talks.
Reuters also reported that Taliban leaders said that the group has been holding meetings with senior US officials in Doha since last weekend, adding they could soon resume formal peace talks.
Zabihullah Mujahid, a spokesman for the hardline Islamist insurgent group, said they were "ready to restart the talks" that collapsed after Trump had called them off earlier this year, the report said.
"Our stance is still the same. If peace talks start, it will be resumed from the stage where it had stopped," Mujahid told Reuters.
"We are hoping that Trump's visit to Afghanistan will prove that he is serious to start talks again. We don't think he has not much of a choice," said a senior Taliban commander on conditions of anonymity.
However, an AFP report claimed the Taliban said on Friday it was "way too early" to speak of resuming direct talks with Washington, citing Mujahid's remarks as well.
"It is way too early to talk about the resumption of talks for now. We will give our official reaction later," Mujahid told AFP in a WhatsApp message.

Trump says Taliban talks back on

Trump paid a surprise Thanksgiving visit to Afghanistan on Thursday, where he announced the US and the Taliban have been engaged in ongoing peace talks and said he believes the Taliban want a ceasefire.

Trump arrived at Bagram Air Base shortly after 8:30 p.m. local time and spent about two-and-a-half hours there. Reporters were under strict instructions to keep the trip a secret to ensure his safety.

The president and first lady made a similar trip last year to Iraq on Christmas night, which was their first to an active conflict zone.

On a brief visit to the Bagram Air Base outside the capital Kabul, Trump served turkey to soldiers in a cafeteria, posed for photographs and delivered a speech after meeting Afghan President Ashraf Ghani.
"The Taliban want to make a deal and we're meeting with them and we're saying it has to be a ceasefire and ... now they do want to do a ceasefire," he told reporters.

About 13,000 US troops remain in Afghanistan, 18 years after the US invaded in the wake of the September 11, 2001 attacks.
"There's nowhere I'd rather celebrate this Thanksgiving than right here with the toughest, strongest, best and bravest warriors on the face of the earth," Trump, on his first trip to Afghanistan, told the troops.
"I've just come from serving Thanksgiving dinner to some of you ... and we had a good time."
Trump joked that he sat down and started eating mashed potato but was called away before he even tasted his turkey.
"I should've started with that instead of the mashed potatoes, I made a mistake," he said.

"But I hope everyone enjoyed the fantastic meal, it certainly did look good and hopefully everyone can get some well-deserved rest this holiday."
Rocky path to peace
The US earlier this year reached a deal with Taliban insurgents to pull US troops from the country and wind down America's longest war in return for security guarantees.
But Trump made a shock move in September, describing the year-long talks as "dead" and withdrawing an invitation to the insurgents to meet near Washington due to the killing of a US soldier.
The Taliban refuse to negotiate formally with the Afghan government, but diplomatic efforts have continued to foster dialogue and plant the seeds of an eventual brokered peace deal.
"For a period of time we've been working to make a deal," Trump said. "We've made tremendous progress over the last six months ... and at the same time we've been drawing down our troops."
Ghani thanked Trump for "putting limits on the type of peace that will ensure the gains of the past year and ensure your security and our security."