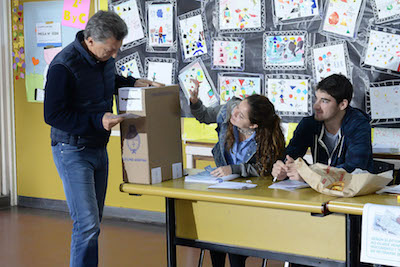 Macri's left-leaning predecessor in the presidency, Cristina Fernandez, won a Senate seat for her return to politics.

Early returns pointed to victories for the governing center-right coalition in most of Argentina's provinces, including Buenos Aires, Cordoba, Sante Fe and Mendoza — the four provinces with the biggest populations.

Twenty-four of 72 Senate seats were at stake as were 127 seats in the 257-member lower Chamber of Deputies.

With an eye toward a possible run in the 2019 presidential contest, Fernandez was assured election to the Senate even though her party came in second behind Macri's coalition. Two of the three Senate seats elected in the Buenos Aires region went to party with the most votes, while the third was reserved for the second-place party.

Fernandez is fighting corruption allegations stemming from her eight-year term as president and a Senate seat would grant her immunity from prosecution.