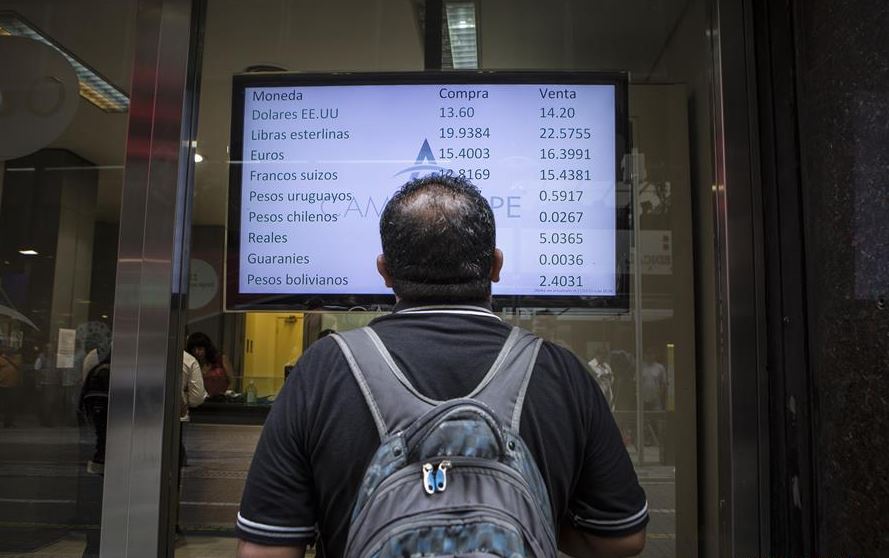 Buenos Aires (People's Daily) - Argentina's Central Bank hiked its benchmark interest rate from 45 to 60 percent on Thursday in a dramatic but fruitless bid to improve the peso, which has plunged to a record low against the US dollar.

Despite the bank's measure to impose one of the world's highest benchmark rates, the currency lost a further 13.5 percent by the close -- its biggest daily loss of the year.

An initial $15 billion tranche was released by the International Monetary Fund (IMF) when the $50 billion three-year stand-by loan was agreed upon in June, with another $3 billion due in October.

Minister of the Treasury of Argentina Nicolas Dujovne will visit Washington next week to "continue to progress" talks with the IMF on "additional disbursements in 2019."

In return for an accelerated loan payment, the government has committed to reducing its budget deficit to 2.7 percent this year, from 3.9 percent in 2017, and to 1.3 percent of the GDP next year.

Sigaut said overall doubts of an Argentine default on borrowings had been assuaged "only until Macri's term ends (in December next year) but as of 2020, they remain latent."

"The dollarization of assets is fueled internally by Argentines' distrust of the peso, because the government has promised much on the economy but hasn't delivered," Sigaut said.

The Argentine financial market is highly sensitive to the US currency interest rate, due to its heavy burden of external debt.

Ever since Macri came to power, he attempted to stimulate domestic economic growth through external financings and issued a large number of foreign debts.

According to data released by the Argentine Ministry of Finance, the public sector external debt has increased by about $93 billion over the past two years, accounting for 70 percent of the total public debt. The rise in the US currency interest rate has significantly increased Argentina’s pressure in repaying its foreign debt.

Currently, the political contradictions in Argentina also hamper the Macri administration’s effort in solving Argentina’s economic issues. Since the ruling “Cambiemos” political party did not hold half of the count in Congress and the Senate, the Justicialist Party remains in power.

This month, Argentina’s congress will discuss the 2019 budget and some members of the Justicialist Party have indicated that they will boycott the government’s draft budget. All major workers unions in Argentine have asked for a salary raise due to the serious inflation and reduced income of residents. The situation caused a huge difference in wage negotiations between the government and the unions, which led to workers’ strikes and demonstrations.

However, the peso crash did have a positive impact on markets, with the MERVAL Index on the Buenos Aires stock market jumping 5.34 percent by close on Thursday on the back of strong performances in the petroleum sector, notably by Brazilian giant Petrobras.

The GDP of Argentina is increasing overall and the pressure of loan payment can be release in three years, according to the IMF.

Argentina currently has a good diplomatic environment and its efforts in resolving the financial crisis have been supported by several countries.

After Macri’s inauguration, he actively improved relations with the US and European countries, while maintaining good relations with China. The IMF greed to provide the country with a $50 billion loan, with inseparable support from the main members of the organization.

(Compiled by Wang Zi and Terry Guanlin Li, with input from AFP.)