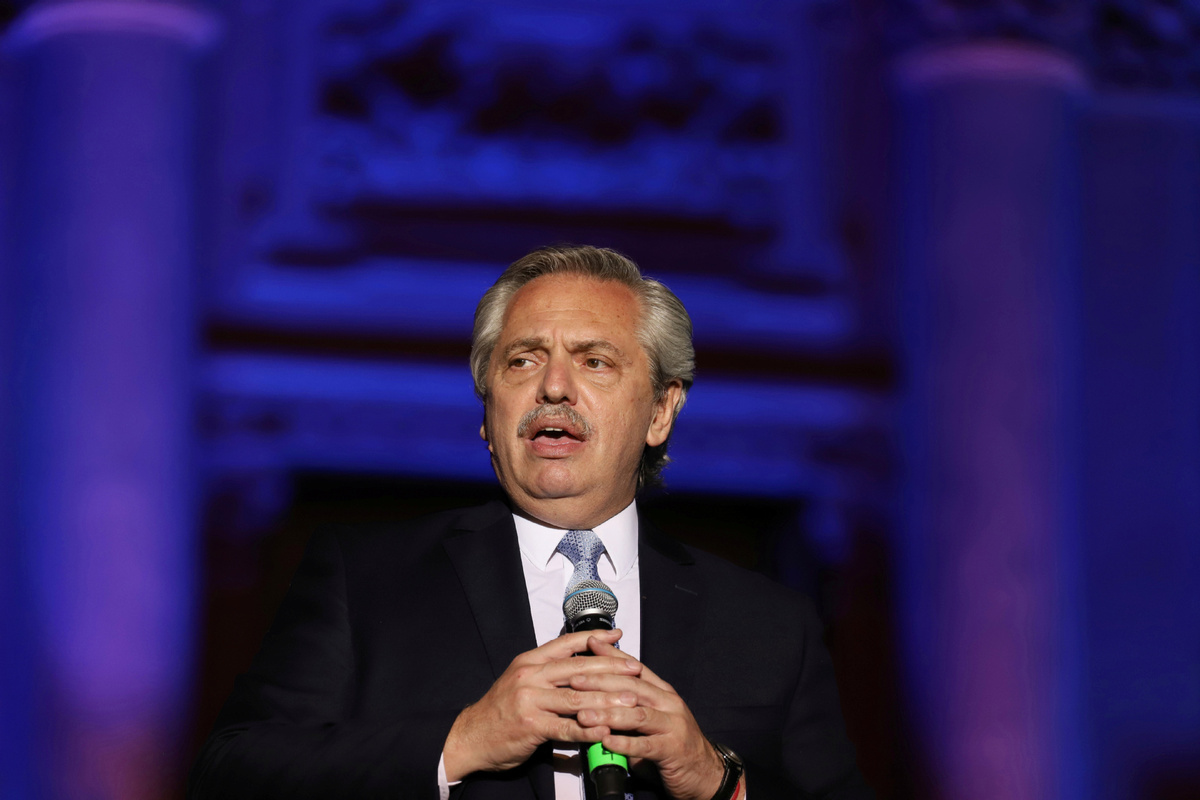 As Alberto Fernandez was sworn in as president of Argentina on Tuesday, many expect that the 60-year-old Peronist politician can revive the South American country's economy from decades of stagnant growth that has resulted in rising poverty and inflation.

Fernandez is facing an urgent challenge to repay the country's sovereign debt after a currency crisis last year led to a $57 billion bailout from the International Monetary Fund, or IMF.

In his emotional hourlong inaugural address to Congress on Tuesday, he confessed that his country "has the willingness to pay the debt, but it lacks the capacity to do so".

"In order to pay the debt, we need to grow first," he said in remarks that won acknowledgment and, at times, applause from lawmakers in the congress. He added that his predecessor, Mauricio Macri, who pursued a policy of economic austerity during his term, had "left the country in a situation of virtual default".

From Tuesday morning, the Peronist leader's supporters began gathering in the historical Plaza de Mayo in the center of Buenos Aires, waving banners and beating drums as food vendors grilled steak and sausages in the summer heat.

They wore T-shirts proclaiming "We're back" and featuring the faces of Alberto Fernandez and Cristina Fernandez de Kirchner, who was Argentine president between 2007 and 2015. She also took office on Tuesday, as Fernandez's vice-president.

Journalists were not given advance copies of Fernandez's speech-said by many to have been handwritten by the former lawyer and law professor-filled with inspirational messages in stating his determination to revive the country's economy. On the streets of Buenos Aires, Argentines watched the ceremony on giant LED screens, prompting many to burst into tears.

A retired Buenos Aires resident Claudia Pouso said that, over the past few years, Argentina has seen "a lot of people unemployed, a lot of hunger, and that is very frustrating. I want everything to be turned around, with more jobs for people. Everything needs to change".

Fernandez, in his speech, said the status quo of Argentina is now "indebted" and "cloaked by an instability that precludes the possibility of development and leaves it hostage to foreign financial markets".

He went on to criticize the judiciary and the court system, highlighting the use of pretrial detention. He vowed to reform the system.

"We have seen a judicial deterioration in recent years. We have seen undue prosecutions and arbitrary detentions induced by the rulers and silenced by some media complacency," Fernandez said. "That is why today I come to declare in front of this assembly and in front of the entire Argentine people, never again."

On Friday, Fernandez unveiled his new Cabinet, in which he appointed Martin Guzman as economy minister, describing him as "very prepared" for the office.

Guzman, 37, a debt-restructuring expert, is expected to help Argentina deal with international creditors and the IMF. "He knows very well the debt conflicts and the macroeconomic conflicts Argentina has," Fernandez said on Friday.

The central bank of Argentina will be headed by economist Miguel Angel Pesce, who had criticized the bank's policies under Macri.

Analysts said the major concern for the country is how it deals with its worst economic crisis in nearly two decades, and Fernandez's arrangements are seen as indicating a shift from the austerity policies adopted by Macri's government.

"The first thing we are going to do is start working on the issue of hunger. At the same time, we will get to work on the issue of debt," Fernandez said in a radio interview earlier.

According to media reports, the country's poverty rate has risen to more than 35 percent of the population, while its currency, the peso, has depreciated 70 percent since 2018.

Inflation has ballooned to more than 50 percent year-on-year, and the IMF forecasts that the country's GDP will shrink by 1.2 percentage points by the end of the year.

Macri had introduced widespread austerity measures, including raising taxes and cutting fuel subsidies, in order to cut government costs after he was forced to seek the $57 billion bailout from the IMF last year.

There is still a question mark over whether Argentina can witness growth in its economy, and even the president may not be able to give a definite answer.

An important adjustment the new president needs to make is to figure out how to stabilize the country's economy, said Guo Cunhai, a researcher from the Institute of Latin American Studies at the Chinese Academy of Social Sciences.

Argentina's foreign debt and domestic inflation will require Fernandez to seek financial savings and achieve a surplus where possible, in order to "spare some more money", he said.

"But the problem is, where would these productive investments come from?" Guo said.