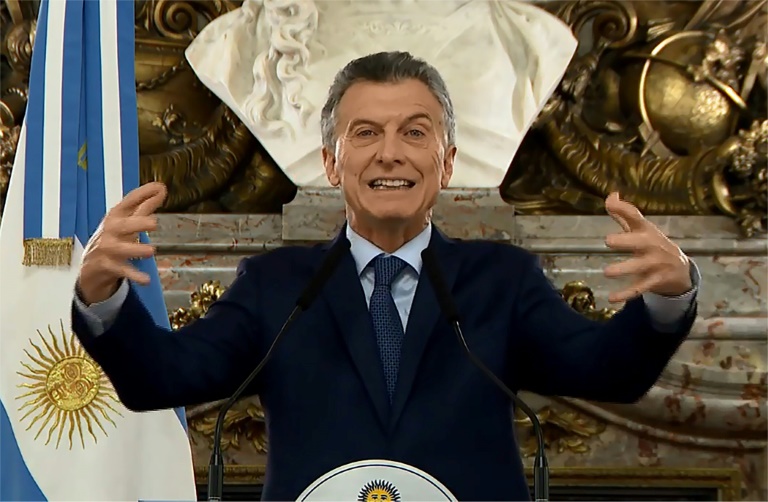 The center-right president admitted in a speech to the nation that Argentina was facing "an emergency," after its currency, the peso, lost more than half its dollar value this year.

"We must confront a fundamental problem: to not spend more than we have, to make efforts to balance the state's accounts," he said in the televised address.

He pledged a pared-down government following cuts that would see the number of ministries slashed from 22 to 10 in an effort to save money, demoting more than half his ministers.

The move had little immediate effect on the markets, where the peso shed a further 3.5 percent Monday to trade at 39.38 to the dollar, slipping back near the record lows of last week.

Thousands of demonstrators took to the streets of Buenos Aires in protest against the government's austerity program.

Argentina is one of the world's biggest exporters of corn and soy oil and Macri's market-friendly approach had previously seen him cut taxes on major grain exporters.

Addressing rich agricultural exporters who will now face increased export taxes, he said: "We know it's a bad tax, but I ask you to understand that it's an emergency."

"We ask those who have more capacity to contribute, those who export, that they make a greater contribution," he said.

In a bid to reassure worried Argentines, he said he would allocate more aid to the country's poor as 25 percent inflation has left many struggling.

"We will overcome the crisis by taking care of the most needy," he said, promising "increased allocations, food programs and price caps on some commodities."

Economy Minister Nicolas Dujovne said many of Argentina's problems stemmed from a difficult international climate, but recognized in a press conference later that "mistakes had been made."

Argentina has already pledged to cut the budget deficit to 1.3 percent of GDP in 2019, but Dujovne said it would now go further, to eliminate its primary deficit -- its borrowing needs before debt servicing -- next year.

"In 2019 we want to reach primary fiscal equilibrium, and by lowering the deficit we will lower our need to issue debt," the minister said.

On the restored grain taxes, Dujovne said the tax would be temporary and would mean an extra 1.7 billion dollars in state coffers in 2018.

"We believe it is crucial that the country's risk is lowered again," he said.

Dujovne was speaking before flying to Washington for a meeting with the International Monetary Fund on Tuesday to finalize a deal to speed up disbursement of a $50 billion loan agreed in June.

ING Economics said if the moves fail to stabilize the currency, Marci "will need to contemplate more drastic options, such as currency controls."

The fiscal package "will speed up the pace of austerity, but the measures ultimately fell short of expectations," said Capital Economics' Edward Glossop.

"But the measure is a hark back to more interventionist poilcymaking. It unwinds president Macri's decision to cut agricultureal taxes on his first day in office back in December 2015, and liberalizes export and import markets. Raising export taxes is against what President Macri stands for," said Glossop.

Macri last week unexpectedly announced Argentina would seek faster disbursement of its line of credit from the IMF.

That set off alarm bells among investors, concerned Argentina will default on government borrowing, and triggered a run on the peso, which plunged 20 percent in two days.

The currency has lost half its value against the dollar since January.

The peso was trading at 38.32 to the dollar at opening Monday, slightly down on Friday's close.

A first $15 billion tranche of the loan has largely gone to prop up the peso in recent months.