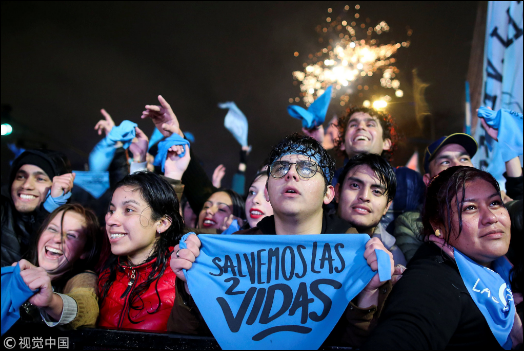 Argentine senators on Thursday voted against legalizing abortion in the homeland of Pope Francis, dashing the hopes of women's rights groups after the bill was approved by the lower house of Congress in June.

The Senate voted 38-31 against the proposed measure, which would have legalized a woman's right to seek an abortion during the first 14 weeks of pregnancy.

Fireworks and shouts of joy erupted among anti-abortion activists camped outside Congress, while pro-choice campaigners, many decked in the green scarves that had come to symbolize their movement, were downcast.

Some burned garbage and wooden pallets and threw stones at riot police, who attempted to disperse them with tear gas and water cannons.

The vote followed a referendum in Ireland, another traditionally Catholic country, in May that paved the way to legislate for the termination of fetuses. It also came after months of fiercely polarized campaigns on the hot-button issue.

The bill was passed by Congress's lower house in June by the narrowest of margins, but was widely expected to fall short of the votes needed to pass in the Senate.

Lawmakers must now wait a year to resubmit the legislation.

"Pro-abortion campaigners would not be giving up," said Miguel Angel Pichetto, a Peronist opposition leader in the Senate.

Earlier in the day, scores of buses had brought people from around the country into Buenos Aires for the dueling rallies outside Congress.

Currently, abortion is allowed in Argentina in only three cases, similar to most of Latin America: rape, a threat to the mother's life or if the fetus is disabled.

The bill had sought to legalize abortion during the first 14 weeks of pregnancy and would have seen Argentina join Uruguay and Cuba as the only countries in Latin America to fully decriminalize abortion.

It's also legal in Mexico City. Only in the Central American trio of El Salvador, Honduras and Nicaragua does it remain totally banned.

The prospect of legalization had energized women's groups and still retains a huge support from citizens.

One abortion rights protester in Buenos Aires, 20-year-old Celeste Villalba, said keeping abortions illegal would not prevent them from happening.

Various charities estimate that 500,000 illegal, secret abortions are carried out every year in Argentina, resulting in around 100 deaths.

Opponents of abortion meanwhile held their own demonstrations.

With such division in the country, one lawmaker from the ruling party, Daniel Lipovetzky, suggested that the matter might end up being put to a referendum.

"It's possible that we propose that," he said.