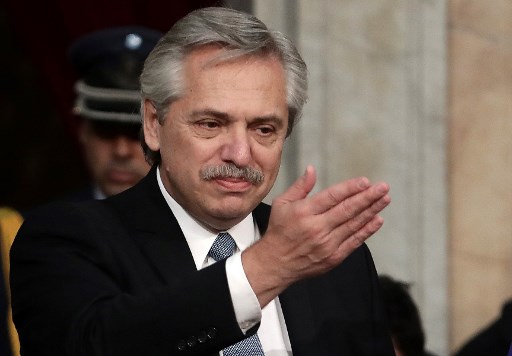 "We need an agreement that will allow Argentina to get back on its feet and not fall down again. This is non-negotiable," Fernandez said at the 138th ordinary session of the National Congress.

Fernandez said the country's public debt has hit "a record amount" and almost 49 billion U.S. dollars are due in 2020 alone. "To this we must add 14.838 billion dollars in interest on this debt."

The Argentine government has said that it will seek a new agreement with IMF to begin repayments when the country's economy stabilizes and sees positive growth.

The IMF said last month that it "assesses Argentina's debt to be unsustainable," and the country needs a definitive plan which could require "a meaningful contribution from private creditors" to "help restore debt sustainability."

Fernandez said Sunday that his administration would not pay the debt only for it to result in "hunger and the destruction of the dreams of Argentineans."

The Argentine Finance Ministry said Sunday it had hired Lazard, a financial advisory and asset management firm, as financial advisor and Bank of America and HSBC as debt placement agents for the debt restructuring process.

An IMF technical mission will arrive in Buenos Aires on Monday to continue talks with Argentine authorities on debt restructuring that the Argentine government expects to conclude by the end of March.

"We are going to work constructively with International Monetary Fund authorities. They have recognized how deeply serious the economic situation is," Fernandez said.