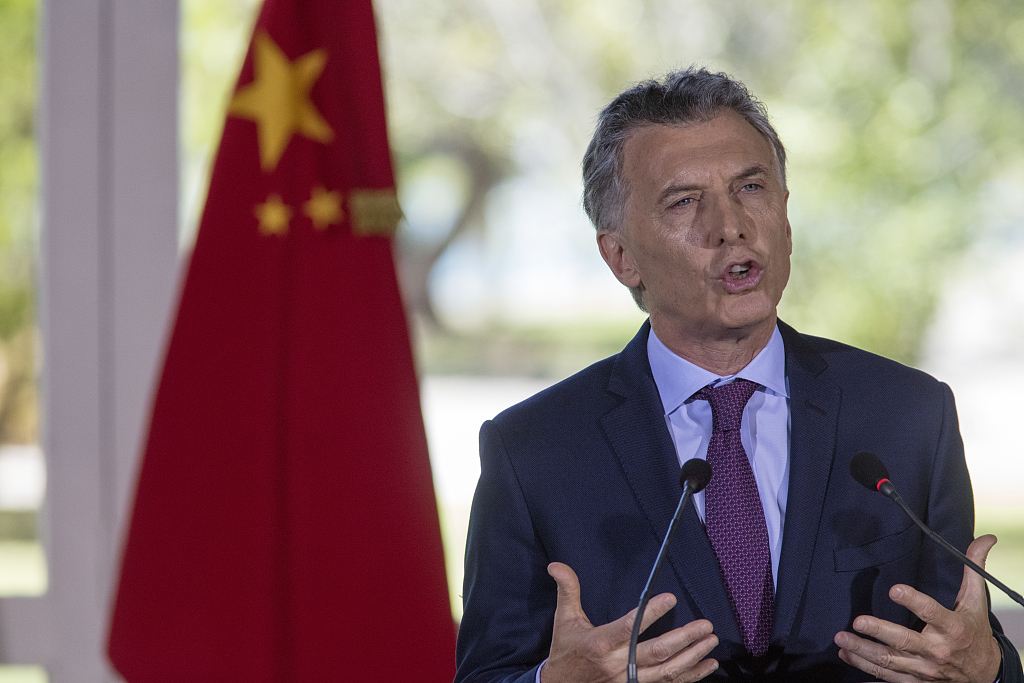 Macri made the remarks during his first official visit to the construction site of the project, where two hydroelectric dams, Condor Cliff and La Barrancosa, are being erected along the Santa Cruz River in southern Argentina to boost national energy output.

The visit was part of a wider swing through southern Argentina's Patagonian provinces of Tierra del Fuego, Santa Cruz and Chubut, where the president is to review the progress of several public works, including the dams, which are expected to expand Argentina's electric energy capacity by more than 6 percent.

"I am pleased to be here right now because these dams represent a lot to Santa Cruz. It is a highly important emblematic project, and I think it is a relief to all residents of Santa Cruz to see the companies pick up momentum," said Macri.

"Something that is very central to a country is having energy. Without energy, a country cannot develop ... that is why we are prioritizing this project, which is additionally renewable energy," Macri said.

Engineering and construction giant China Gezhouba Group Company (CGGC) is spearheading the hydropower project, which is expected to create 5,000 direct and 15,000 indirect jobs once complete.

When the dams are completed, the South American country will be able to generate an additional 4.95 billion kilowatt hours (kWh) in energy, reducing its reliance on fossil fuels and improving its energy structure.

Annual savings in imported fuel will reach $1.1 billion, according to Gezhouba's estimates.

The project is poised to help drive "growth" and "development" regionally and nationally by upgrading Argentina's energy sector, noted Macri.

"Chinese investment in infrastructure in Argentina offers a great opportunity to complement our economies," said economist Gonzalo Tordini, who teaches at the National University of Quilmes in southern Buenos Aires.

Tordini believes "profitable partnerships between Argentine and Chinese companies" in energy generation "allow us to visualize a concrete example of mutual benefit in ties between countries."

"That's why the project is of great transcendence for the country, since Argentina needs to urgently increase its output of clean energies to meet home consumption and to make any policy of promoting industrial and agricultural production viable," said Tordini.

"Argentina has found in China a great partner to carry out this project that Santa Cruz's leaders have dreamed of since the 1950s. The Santa Cruz River is one of the country's biggest, that's why the dams that are under construction will help achieve a longed for dream of Argentina's Patagonia, which will benefit the whole country," said the expert.