An Arizona judge on Friday declined to put her order that allowed enforcement of a pre-statehood law making it a crime to provide an abortion on hold, saying abortion rights groups that asked her to block the order are not likely to prevail on appeal. 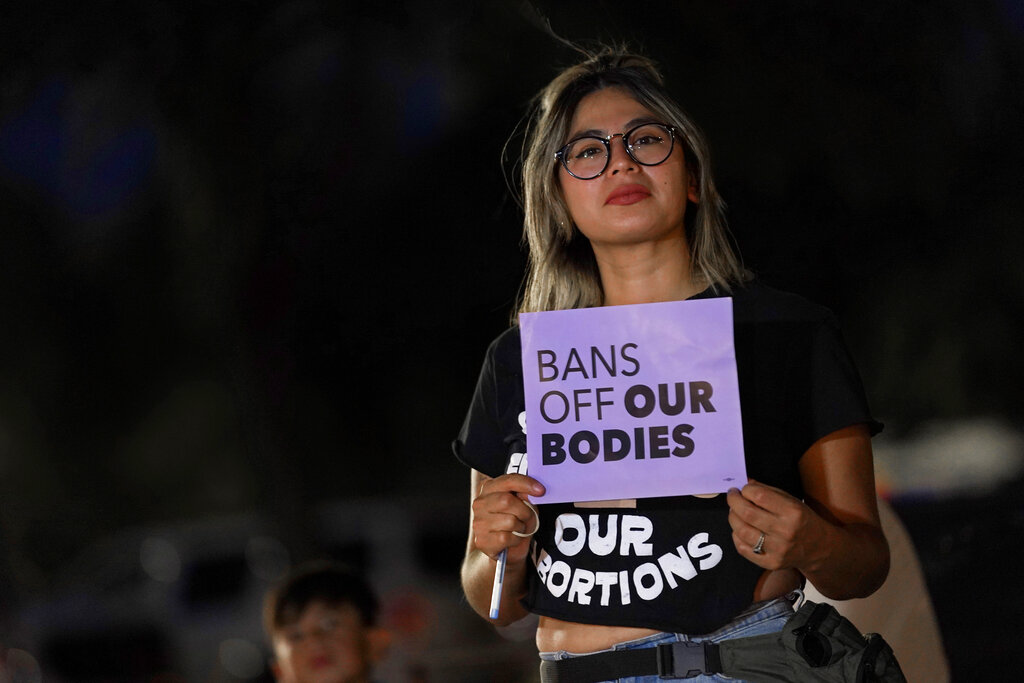 Celina Washburn protests outside the Arizona Capitol to voice her dissent with an abortion ruling, Friday, Sept. 23, 2022, in Phoenix. (File photo: AP)

The ruling from Pima County Superior Court Judge Kellie Johnson means the state's abortion providers will not be able to restart procedures. Abortions were halted on Sept. 23 when Johnson ruled that a 1973 injunction must be lifted so that the Civil War-era law could be enforced.

Republican Attorney General Mark Brnovich sought the order lifting the injunction. Attorneys with his office told the judge that, since the U.S. Supreme Court's June 24 decision said women do not have a constitutional right to obtain an abortion, there was no legal reason to block the old law.

Planned Parenthood and its Arizona affiliate had urged Johnson to keep the injunction issued shortly after Roe v. Wade was decided in 1973. They argued that laws enacted by the state Legislature in the ensuing 50 years should take precedence.

Planned Parenthood's lawyers on Monday asked Johnson to put her ruling on hold to allow an appeal.

Before last Friday’s ruling allowing enforcement of the old law, abortions were legal in Arizona until the fetus was viable, usually at about 24 weeks of pregnancy. But on Saturday, a law enacted by the state Legislature last spring banning abortion at 15 weeks took effect.

Gov. Doug Ducey has said that law takes precedence, but his lawyers did not seek to argue that position in court. Brnovich and some Republican lawmakers insist the old law is in force.

Brittany Fonteno, president and CEO of Planned Parenthood of Arizona, said she was “outraged” by the ruling.

“It is impermissible that Arizonans are waking up each morning to their elected officials making conflicting statements about which laws are in effect or claiming that they do not know, and yet the court has refused to provide any clarity or relief,” Fonteno said.

Some clinics in Arizona have been referring patients to providers in California and New Mexico since Johnson lifted the injunction on the old law, and they were prepared to restart abortions. The pre-statehood law carries a sentence of two to five years in prison for doctors or anyone else who assists in an abortion. Last year, the Legislature repealed a law allowing charges against women who seek abortions

Ashleigh Feiring, a nurse at abortion provider Camelback Family Planning in Phoenix, said her office will keep looking for ways to serve patients.

“We’re trying to think of everything we can to get loopholes in the law,” Feiring said Friday, adding that the facility would be willing to once again provide the procedure.

Feiring said her office continues to do post-miscarriage care and provide patients with ultrasounds so they know how many weeks pregnant they may be. That's important, because abortion pills can only be used in the first 10-12 weeks of a pregnancy.

Feiring said some patients are able to get an abortion pill prescription from a provider in Sweden and get it filled through the mail by a pharmacy in India, but that takes about three weeks. Arizona law bans delivery of the abortion pill through the mail, and U.S. providers generally will not take that risk.

Since Roe was overturned, Arizona and 13 other states have banned abortions at any stage of pregnancy. About 13,000 people in Arizona get an abortion each year, according to Arizona Department of Health Services reports.