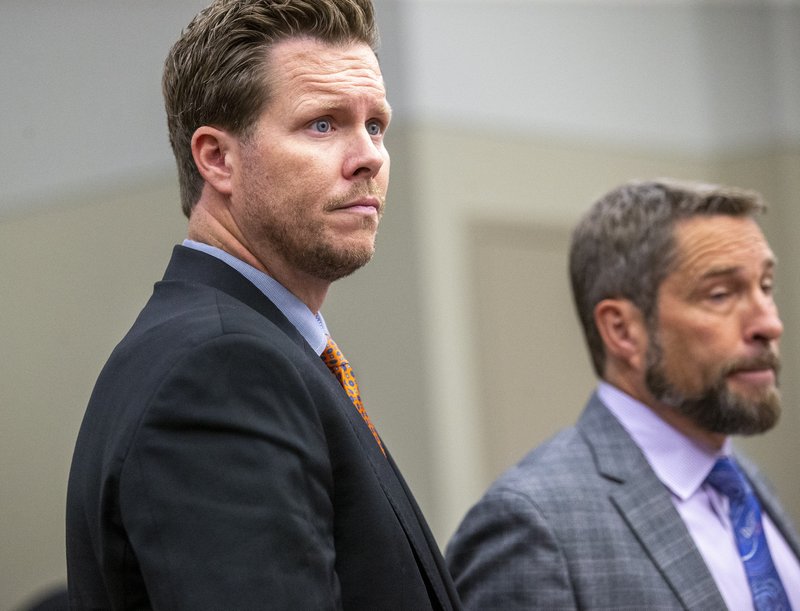 In this Nov. 15, 2019 file photo Paul Petersen appears at court in the Matheson courthouse in Salt Lake City Utah with his attorney Scott Williams. (Photo: AP)

An Arizona elected official accused of paying women from a poor Pacific island nation to give their babies up for adoption in the United States made an appeal Wednesday to keep his job.

Lawyers for Maricopa County Assessor Paul Petersen told the county Board of Supervisors that he did not neglect his duties in office despite spending three weeks in jail before he was able to post bond.

“His criminal counsel has asked that he save his testimony for criminal proceedings,” Petersen’s attorney Kory Langhofer told the board. “There’s no reason for him to be here today.”

John Doran, a lawyer for the board, disagreed.

“At the end of the day, only Mr. Petersen knows what he would have or should have done in terms of his day-to-day routine as the county assessor that he didn’t do because he was too busy preparing legal pleadings and bankruptcy matters or personal injury cases for facilitating abortions. And he’s not here to tell us what he did and didn’t do,” Doran said.

“The fact of the matter is the man was elected. He’s entitled to hold that position until the charges justify suspension or removal from office,” Langhofer said. “There is no evidence in your report or anyone outside report that the man has failed to perform his duties.”

Board Chairman Bill Gates said the supervisors took the matter under advisement after the hearing. The board did not vote on whether to lift Petersen’s suspension.

The supervisors voted unanimously in October to place Petersen on an unpaid suspension for 120 days, ruling he’d neglected his office and used his county computer to do work for his adoption business.

Petersen has pleaded not guilty in Arizona, Arkansas and Utah to charges stemming from his law firm’s adoption practice.

Prosecutors say he illegally paid women from the Marshall Islands up to $40,000 to have their babies in the United States and give them up for adoption. Charges include human smuggling, sale of a child and fraud.

Langhofer said the supervisors can’t point to any duty that his client was unable to perform while behind bars. He also argued that the law allowing the supervisors to suspend the elected assessor is unconstitutional.

Lawyers for Petersen and the Board of Supervisors were in negotiations on a settlement that would involve the suspended assessor resigning, but did not come to an agreement.

The county offered to continue Petersen’s benefits for a period of time, but refused Petersen’s request for a portion of his $77,000 annual salary.

Petersen, a Republican, oversees an office that determines the value of residential and business properties for tax purposes.

Lawyers hired by the county’s top prosecutor to probe Petersen’s conduct in office said they found no indication he neglected a specific duty of office required by law. But the lawyers, Lee Stein and Anne Chapman, said the supervisors may determine that Petersen had a duty to follow county policies prohibiting the use of his computer for outside business and requiring him to cooperate with investigators.

“Our investigation established that Mr. Petersen devoted substantial time during working hours to his adoption law practice, even after serious questions about its legality had been raised over the years,” the lawyers wrote in a preliminary report last week. “Moreover, the investigation confirmed that he created and saved in excess of 800 documents relating to his private law practice on County computers, while in his County office, during work hours.”