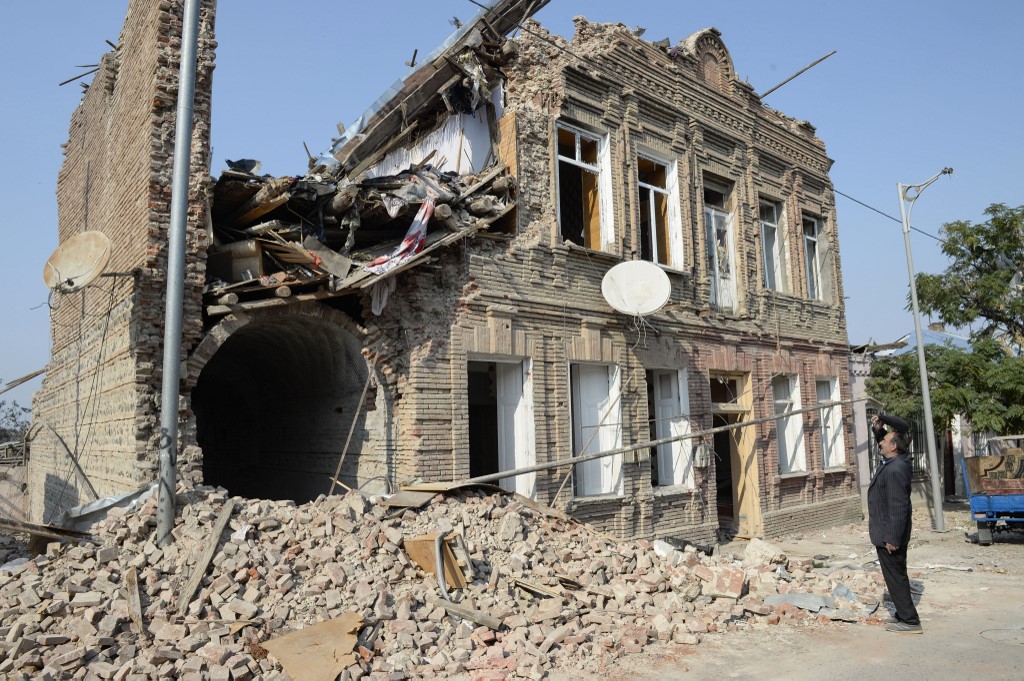 Local man Gambar looks at a residential building damaged by shelling during the ongoing military conflict between Armenia and Azerbaijan over the breakaway region of Nagorno-Karabakh, in the city of Ganja, Azerbaijan, on October 27, 2020.

The two sides will also start to recover and exchange remains on the battlefield, and provide a list of currently detained war prisoners for eventual exchange, according to a statement by the Organization for Security and Cooperation in Europe (OSCE) Minsk Group co-chairs.

They will also provide in writing comments and questions related to possible ceasefire verification mechanisms in accordance with item 2 of the Oct. 10 joint statement, the statement said.

On Friday, the Co-Chairs of the OSCE Minsk Group, namely Igor Popov of Russia, Stephane Visconti of France, and Andrew Schofer of the United States, met separately and jointly with Armenian Foreign Minister Zohrab Mnatsakanyan and Azerbaijani Foreign Minister Jeyhun Bayramov in Geneva.

"The Co-Chairs once again called on the sides to implement, in full, their commitments, including the immediate establishment of a humanitarian ceasefire, in accordance with the October 10 Moscow Joint Statement, which the sides reaffirmed with Paris on October 17 and in Washington on October 25," the statement said.

It added that the co-chairs will continue working with the sides intensively to find a peaceful settlement of their latest conflict.

Armenia and Azerbaijan have been at loggerheads over the mountainous region of Nagorno-Karabakh since 1988. Peace talks have been held since 1994 when a ceasefire was reached, but there have been sporadic minor clashes. A new round of armed conflict broke out along the contact line on Sept. 27.