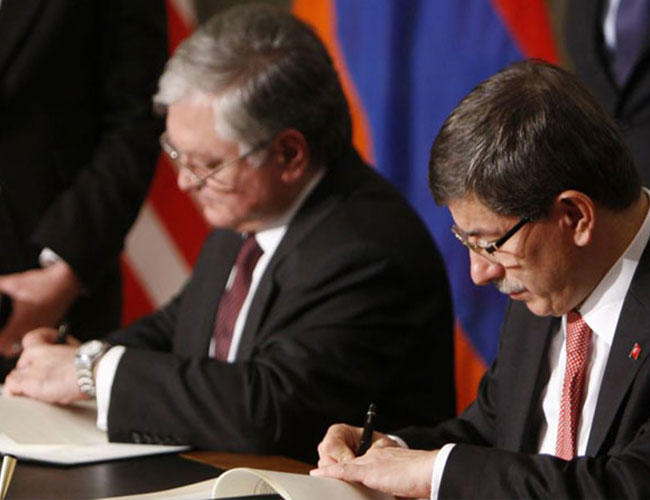 Armenia has scrapped a peace agreement it signed with Turkey in 2009 in a failed attempt to normalize relations between the two countries, the Armenian president’s press service said on Thursday.

Armenia and Turkey signed the landmark peace accord to restore ties and open their shared border after a century of hostility stemming from the World War One mass killing of Armenians by Ottoman forces.

The deal needed parliamentary approval in both countries, but was never ratified, and the Armenian and Turkish governments have since accused each other of trying to change the deal.

“As a result of discussions, President (Serzh) Sarksyan signed a decree and a national security council approved a procedure of annulling protocols which have been signed on October 10, 2009,” the press service said in a statement.

The press service quoted Sarksyan as saying that Armenia did everything “not to leave the burden of the settlement of relations between Armenia and Turkey on the shoulders of future generations.”

“But Ankara ... did not even make a single step towards ratification and implementation of protocols, but also left no doubt that it was not intending to do it,” Sarksyan said.

He added that Armenia was ready to cooperate with Turkey in the future, if “there would be the same willingness from the Turkish side.”

There was no immediate reaction from Turkey.

Armenia suspended its ratification following Turkish demands that it first reach terms over a breakaway Nagorno-Karabakh region, a condition Turkey set to appease its ally Azerbaijan.

Azerbaijan feared it would lose leverage in negotiations to win back Nagorno-Karabakh, which it lost to Armenian-backed forces in the bloodiest of the ethnic conflicts which followed the 1991 collapse of the Soviet Union.

“The leadership of Turkey are mistaken if they think that those documents can be held hostage forever and ratified only at the most opportune occasion from their very point of view,” Sarksyan said in a speech at the United Nation’s General Assembly last autumn.