WORLD As Brexit stalls, supporters protest betrayal of their dream

As Brexit stalls, supporters protest betrayal of their dream 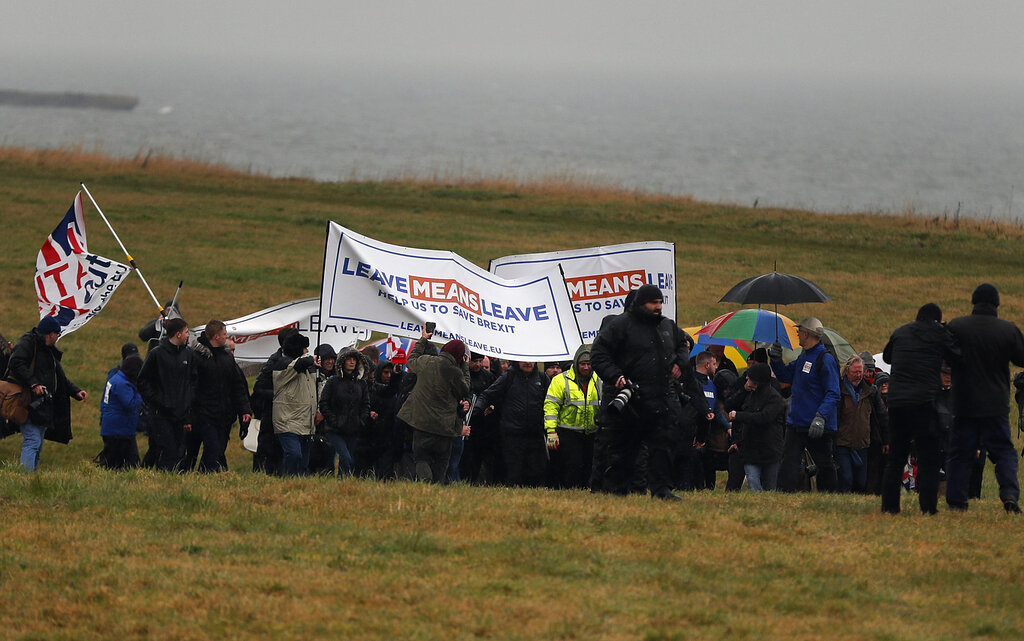 Protestors walk along the coastline at the start of the first leg of March to Leave the European Union, in Sunderland, England, Saturday, March 16, 2019. (Photos: AP)

With Britain's departure from the European Union likely to be put on hold, some Brexit supporters fear their dream is dying.

But they aren't giving up without a fight — or at least, a long walk.

Hard-core Brexiteers led by former UK Independence Party leader Nigel Farage set out Saturday on a two-week "Leave Means Leave" march between northeast England and London, accusing politicians of "betraying the will of the people."

They plan to finish at Parliament in London on March 29, the day the UK was supposed to leave. That deadline now looks unlikely. With British politicians deadlocked over departure terms, lawmakers voted Thursday to seek to delay Brexit until at least June 30. 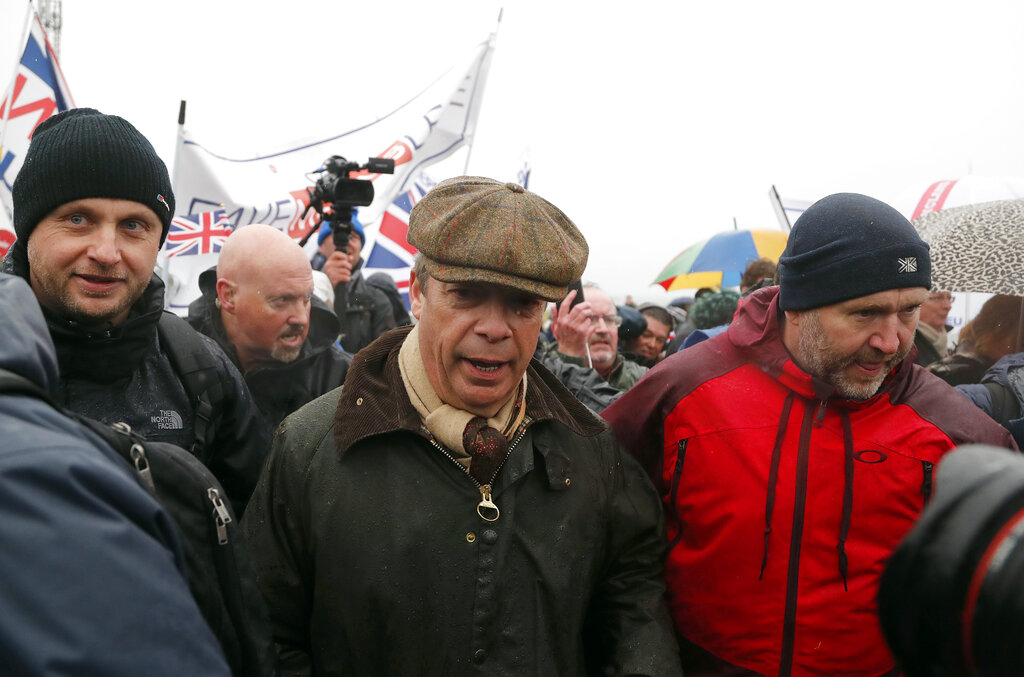 "If you have seen what's happening in Parliament this week, we may well not be leaving the EU," said Brexit figurehead Farage, who joined the protest dressed for a country walk in tweed cap and Barbour jacket. "If politicians think they can walk all over us, we're going to march back and tell them they can't."

For the 100-200 Brexit believers who showed up to march on a wet, cold day, the gridlock in Parliament is confirmation that Britain's politicians have no intention on cutting the country's ties with the 28-nation EU.

"People now are just fed up with the whole situation and want to get out," said John Harrington, who traveled from Southend on England's south coast. "Now with it being prolonged, it could just go on forever."

Like many things connected to Britain's departure from the EU, the Brexit march didn't go completely to plan. Chaos reigned as protesters set off in a cold rain down a muddy North Sea coast path in Sunderland, a former shipbuilding city 270 miles (435 kilometers) north of London.

The starting point was changed at the last minute for what organizers said were security reasons. Even so, a small band of pro-EU protesters caught up with the Brexiteers, singing a ditty telling them where they could shove Brexit. The marchers responded with bad-tempered shouts of "traitors" and "losers."

"I don't think we're marching," Farage said as he was propelled along by a phalanx of security guards. "We're sort of shuffling."

Farage doesn't plan to walk the entire route. Those who do will not cover the whole distance on foot — some legs will be covered by vehicle.

The marchers plan to travel through pro-Brexit heartlands starting in Sunderland, which voted by 61 percent to 39 percent in June 2016 to leave the EU.

Many here stand by that decision, despite warnings that Brexit could damage rather than help the local economy.

Japanese automaker Nissan employs 6,700 people at its plant in the city, and supports thousands more jobs through its supply chain. In February, Nissan canceled plans to build a new SUV in Sunderland. That reversed a decision announced two years ago after Prime Minister Theresa May's government offered some 60 million pounds in incentives. Last week, Nissan's Infiniti division announced it would move production of two models from Sunderland, in another blow to jobs there.

The company says the decisions are not directly related to Brexit, but the auto industry has warned that a no-deal departure would destroy the complex international supply chains that carmakers rely on. 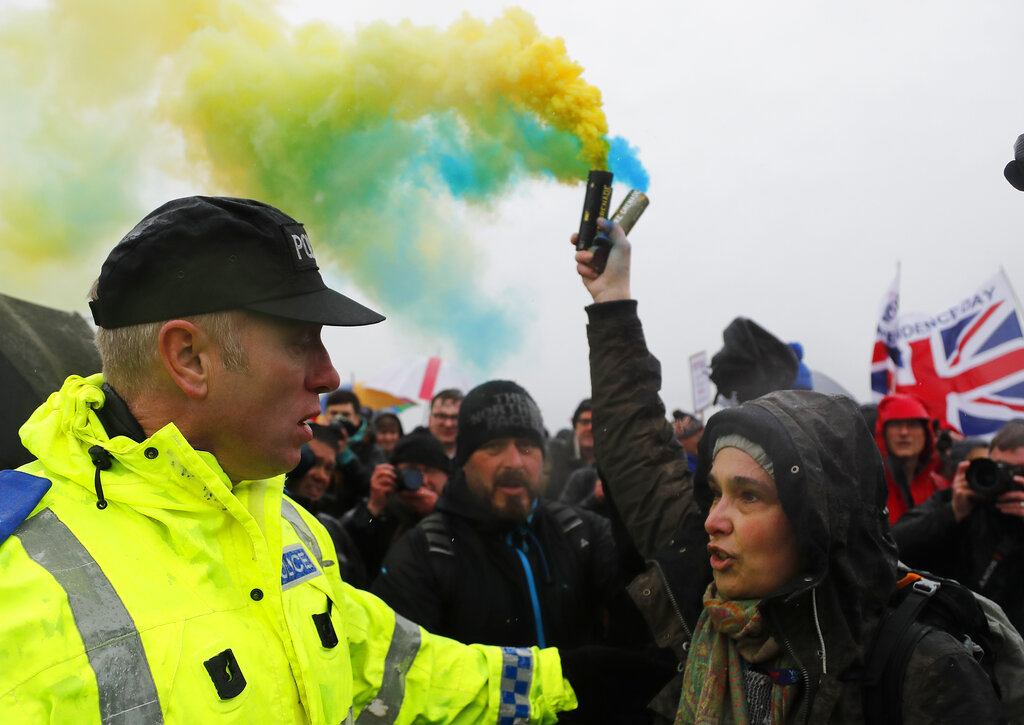 A pro European Union demonstrator releases flares to protest the start of the first leg of March to Leave the European Union, in Sunderland, England, Saturday, March 16, 2019.

Jim Kerr, 60, does not believe the economic warnings. He said Sunderland has long been ignored by policymakers, whether in London or Brussels.

Almost three years after Briton voted to leave the EU, uncertainty reigns about when the country will leave, and on what terms.

A withdrawal agreement struck between May's government and the bloc has twice been rejected by Parliament, which has also said it doesn't want to leave the EU without a deal. Amid the deadlock, Parliament voted this week to request an extension. Meanwhile, May plans a third-time-lucky vote on her Brexit deal next week.

Delaying Brexit would require approval from all 27 remaining EU nations, who are fed up with the political bickering in London. They say they will only grant an extension if Britain has a solid plan for what to do with the extra time. 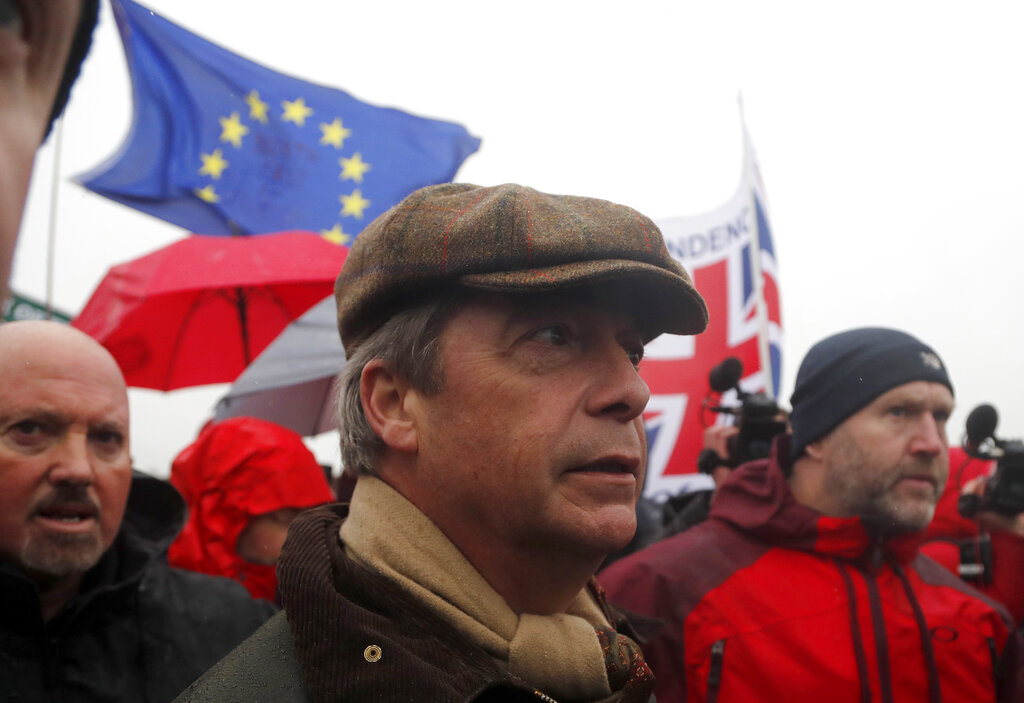 Pro-Brexit British politicians including Farage, meanwhile, have urged populist European governments such as Italy's to veto an extension, leaving Britain to crash out of the bloc without a deal.

UK businesses warn that a no-deal Brexit could cause huge upheaval, with customs checks causing gridlock at ports, new tariffs triggering sudden price increases and red tape for everyone from truckers to tourists.

But many Brexiteers here shrug off such worries. For them, Brexit can't come soon enough, and the split from Europe can't be too complete, and compromise with the EU is anathema.

"We voted to leave," said 50-year-old marcher James Murphy. "Not leave with a deal — just leave."

Not everyone in Sunderland agrees.

Social care worker Mary Ann McDonald said that during the 2016 referendum, "we weren't voting for a plan. It was just the idea, and that hasn't worked out."

She would prefer to remain. But she too is exasperated by the political paralysis in London.

"I think it's become a circus," she said. The prospect of delay "is a relief for me personally, but I just think, What now?"