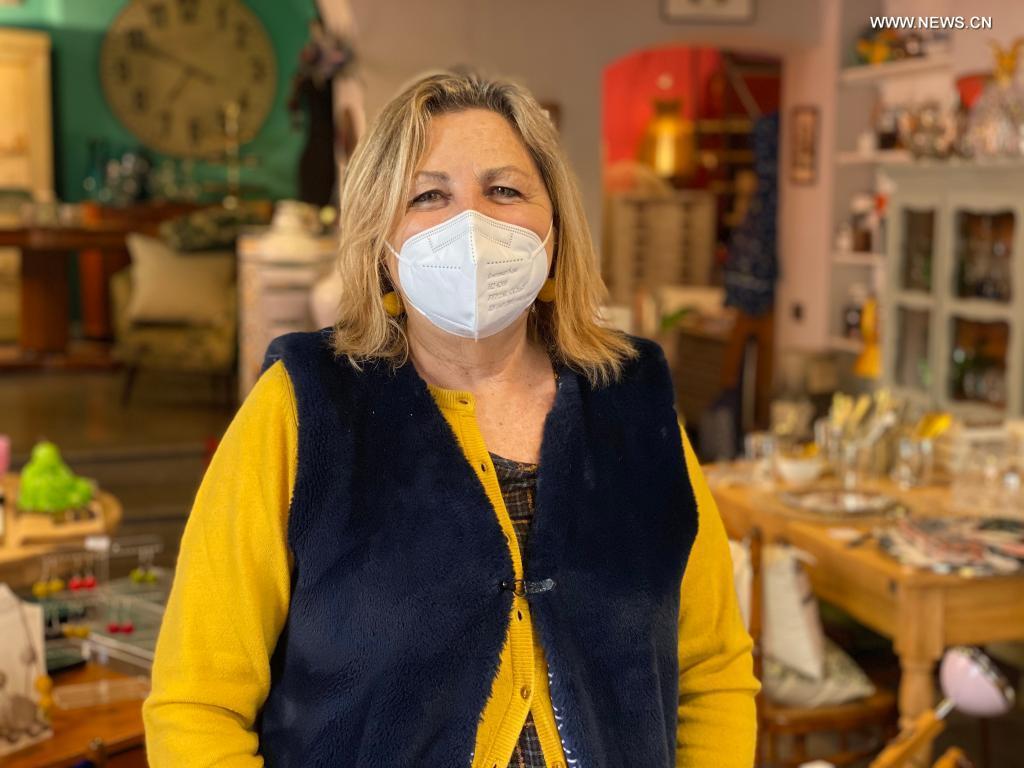 Daniela Pancalli, who owns a home decor shop in the Rome neighborhood of Trastevere, poses for a photo in Rome, Italy, on March 30, 2021. The Italian government is struggling to find the right balance between measures designed to halt the spread of the coronavirus and those that allow people the freedom to move around and business to be at least partially open for business. (Photo: Xinhua)

"I haven't been this far from home in three weeks," she told Xinhua. "It's a beautiful day, the sun is out, and I'm taking advantage of the new rules and enjoying Rome as much as possible."

Caprioli, a 43-year-old office worker, was referring to the temporary loosening of coronavirus restrictions effective on Tuesday.

Lazio, the region that includes Rome, switched to "orange" the second most restrictive of Italy's four-color system. Until Monday, Lazio had been a "red" zone. The change means that shops can open and people can venture out of their homes for non-essential purposes as long as they stay within the limits of the city where they live.

"I could have never guessed that I'd be so thankful to have permission to walk around the city but it makes such a difference," she said while on a walk with her husband that took them to Rome's Campidoglio, one of the city's most picturesque spots.

"You move a few kilometers in the city and the views are different, the air is different," Caprioli said. "I feel relaxed."

However, the latest change is a brief one. Lazio will return to being a "red" zone Friday, ahead of Easter, a major religious holiday. Three weeks ago, it was a "yellow" zone, the second least-restrictive category. The changes are made on a region-by-region basis based on how fast the coronavirus is spreading in that area along with the anticipation of potential spreader events, like holidays.

The Italian government is struggling to find the right balance between measures designed to halt the spread of the virus and those that allow people the freedom to move around and business to be at least partially open for business.

That is why the whole country will remain in either the "red" and "orange" category until at least the end of April, as the country tries to slow a new wave of infections. Italy has had 20 days so far this month with at least 20,000 infections nationally, a level topped only three times over the first two months of the year.

For Matteo Tremolada, a 29-year-old coffee bar worker, the changes between the "yellow," "orange" and "red" categories can create a kind of whiplash.

"I know we have to take precautions but changing the plan so often seems disorganized," Tremolada said in an interview with Xinhua. He was walking his dog in Rome's Aventino neighborhood, where his parents live.

"I'm happy to have the freedom to be outside and to visit my parents, but the way these things change back and forth is confusing," Tremolada said. "I really just want this to be over."

Daniela Pancalli, who owns a home decor shop in the Rome neighborhood of Trastevere, agreed.

"I don't think all these changes are good for anyone, whether we're talking about people's mental well-being, or for the shops that open one week and close the next," said Pancalli, who reopened Tuesday but said she had only one client by early afternoon.

"This is a terrible situation for everyone and it doesn't do any good to blame anyone," she told Xinhua. "The virus has us in our hands and all we can do is to keep going until enough people can get vaccinated and we can put this pandemic behind us."