As England enters a new lockdown on Thursday with coronavirus deaths rising again, businesses that were already struggling to recover from the shutdown during the first wave are worried and frustrated. 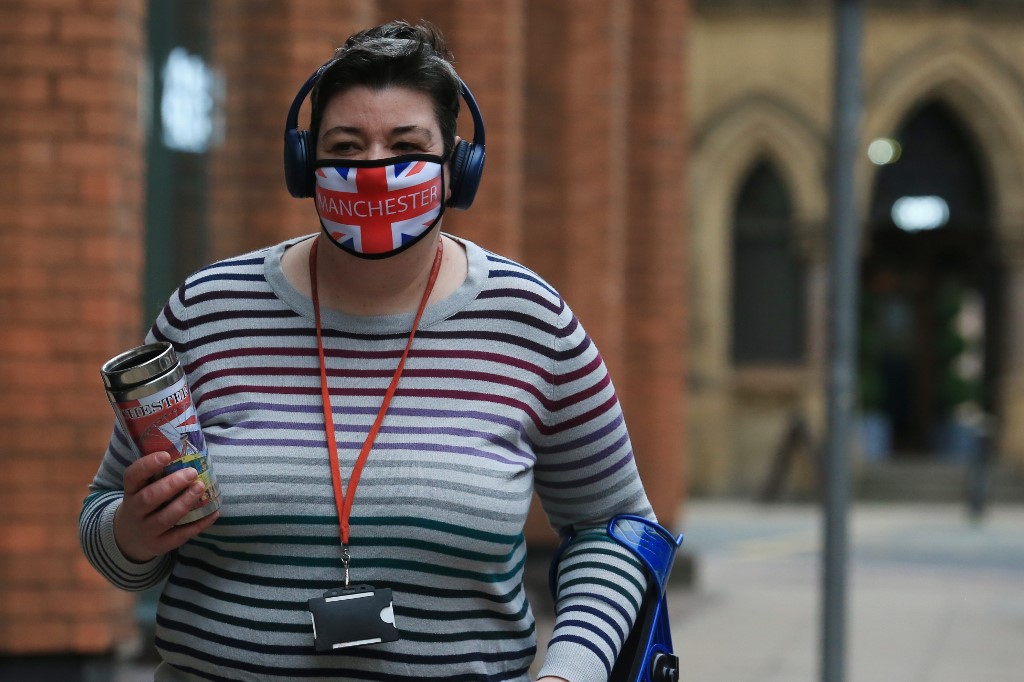 A woman wears a Manchester face mask as she walks in central Manchester, northwest England on November 5, 2020 as England enters a second coronavirus lockdown. (Photo: CFP)

"For us it is absolutely insane to go through this again just before Christmas", said Faraj Faraj, the operational director of food hall Mercato Metropolitano.

This vast venue hosts dozens of takeaways and eat-in stands selling cuisine from around the world, as well as a grocery store that remained open during the first lockdown and will do so again.

"We will survive but we have to take another approach, with increased testing and making sure we have the right testing app," he added, stressing that the food and drink sector was bearing the brunt of the pandemic's economic cost.

His boss Andrea Rasca, founder of the Mercato, is more optimistic, telling AFP: "We were ready before, we are ready now."

His sales jumped after the first lockdown, exceeding the turnover before the pandemic, but the enforced closure from March to July blew a hole in cash reserves that he and fellow shareholders had to top up.

"There's going to be very little revenue and it will be important for us to, like the first time, reopen with a big bang," he said, adding Prime Minister Boris Johnson's government "doesn't know what they're doing".

His finance minister Rishi Sunak announced Thursday it would extend a furlough scheme, which pays up to 80 percent of the wages of those who are unable to keep work during lockdown, until March.

Hairdressing is another sector badly impacted by the second shutdown.

The Visage salon in the residential London district of Belsize Park has been a hive of activity in recent days as customers rushed to get a trim before the new rules took force.

The masked staff have been working long days to clear the shaggy-haired backlog of customers from the first lockdown, but everything has now ground to a shuddering halt.

Estella Cicek, the salon's co-owner, is anxious and thinks the government should have acted earlier to avoid a longer closure.

She added a two-week "short-circuit" shutdown during the recent school holidays "might have been a bit more bearable.

"Now we are closing our doors and for a minimum of one month," during the crucial holiday period, Cicek said.

She recalled that before the first lockdown, customers were afraid of catching the virus and "the salon was very quiet."

"We were actually relieved when they told us 'look, you do have to close your doors' and then we did receive the financial support" from the government.

"But this lockdown, we are a little bit disappointed and worried because we don't know how long it's going to be. If they open on December 2, I think we can do it," she added.

The nightlife industry has also been ravaged by the social restrictions, and since March, London's former nocturnal hotspot "Printworks" has again become a huge empty warehouse.

By September the situation was already becoming critical for the club, which usually welcomes up to 4,000 revellers per night.

Like it, many nightlife establishments have never been able to reopen since the first lockdown.

Simeon Aldred, co-founder of Printworks, tried not to fall into despair despite having to already lay off around 350 employees, not knowing that the government's furlough scheme would be extended beyond October.

His venue has also not been able to access Arts Council funds available to some of his better-known rivals, such as the Ministry of Sound.

"To enter another lockdown at this key time, without funding, and without any kind of recognition from the government, it's going to be really, really challenging," the red-bearded entrepreneur told AFP.

"For us in the nightime economy sector, this kind of chopping and changing things is proving an almost impossible environment," he added.

He predicted serial bankruptcies in the coming weeks but hoped that Printworks will survive the pandemic thanks partly to the support of their real estate owner British Land.

"We're fighters, we've built this from nothing with our money ...and we're planning on fighting all the way through this second lockdown."