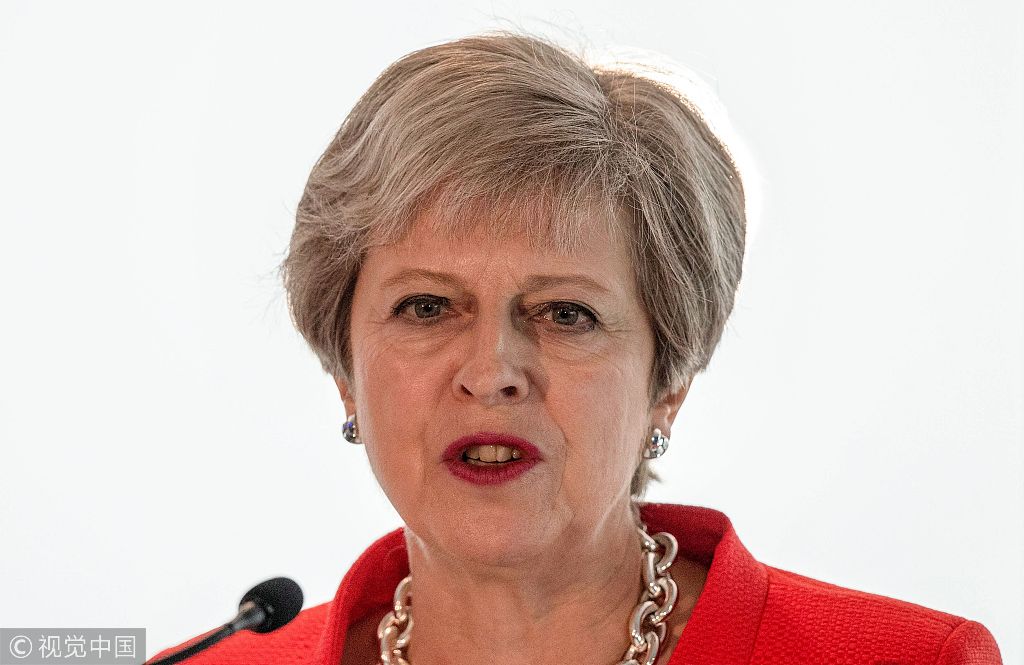 British Prime Minister Theresa May said Sunday she will not be forced into watering down the blueprint she published outlining Britain's plans for a new trade deal after it leaves the European Union.

May also insisted that she will not give in to people calling for a second referendum on the future relationship deal reached between Britain and the EU.

The prime minister made clear her intentions in a major article in the Sunday Telegraph, saying she will not be pushed into compromises on her Brexit blueprint, known as her Chequers agreement, that are not in Britain's national interest.

May also said a new referendum would be a gross betrayal of British democracy and trust following the decision in the 2016 referendum to leave the EU.

She expressed confidence that the government can broker a good deal for Britain, in what the Telegraph said was a stark appeal to Eurosceptic MPs opposed to her proposals and concerned that they could be further watered down. May also insisted that Britain would ultimately thrive in the event of a no-deal Brexit.

May's tough 'no surrender' message came as British MPs prepared to return to Westminster Tuesday after their summer recess, with Brexit expected to dominate the political agenda.

Four hours before politicians gather in the House of Commons chamber, top civil servant Philip Rycroft, Head of UK Governance Group and Permanent Secretary at Department for Exiting the European Union, faces a grilling from a House of Commons committee.

Rycroft is to be quizzed about the progress being made in Britain's negotiations on its withdrawal next March from the European Union.

MPs in the main chamber will also be eager to hear about Brexit from May or Brexit Secretary Dominic Raab.

Raab was buoyant earlier this week after a tough six-hour session with the EU's chief Brexit negotiator Michel Barnier.

Still to be resolved is what happens at the border between Northern Ireland and the neighboring Irish republic after Britain ends its membership of the bloc.

Brussels, Dublin, Belfast and London all want a frictionless border to continue, but so far there has been no acceptable solution to how it would work.

Following talks in Brussels which ended Friday both sides said progress on a post-Brexit trade relationship was being made. But there was no breakthrough on the crucial issue of the Irish border.

Raab told journalists he was stubbornly optimistic about getting a deal, while Barnier said he needed detail from Britain on its plan to avoid a hard border in Ireland.

All eyes are focused on Oct. 17, a deadline for both sides to agree a divorce deal and details on a future trading relations. Raab has hinted that the deadline, due to coincide with a summit of EU leaders, could be missed slightly.

Raab said Britain was committed to resolving the deal by the October meeting of the European Council.

The London-based national newspaper, the Daily Express, said Saturday that an ambitious Brexit deal is within reach and can be "done and dusted" by October. It means, said the report, that May could have a deal to put to the British Parliament after the October European Council summit.

Despite her latest message, May still faces opposition from members of her own Conservative party who have rejected her "soft Brexit" blueprint.

Meanwhile petition for a "people's vote" on a final deal was Sunday heading towards reaching a target of 300,000 signatures.

The Spectator magazine said in a commentary in its latest edition that it's not just hard to see how May would get her Chequers deal through parliament; with her Conservative party so divided on the issue. It's hard to see how she would get parliamentary approval for any Brexit deal, it added.

That could, said the Spectator, in theory put the power in the hands of People's Vote MPs who say they will back May's plan, so long as the government puts it to the public in a second referendum.

Polling so far suggests that there has been no great shift in public opinion, the Spectator said.

"The polls that do give Remain a lead in a theoretical second vote tend to rely on population changes, older Brexit voters dying, pro-EU teens becoming eligible to vote," added the report.

The commentary described as seeming odd that a cabal of politicians, celebrities and millionaires can successfully present themselves as a great democratic force and seek to overturn Brexit. But the people behind the People's Vote have one big advantage: their opponents are in disarray, said the Spectator.

With less than 50 days before that crucial potential deal-making European Council meeting, groups, politicians and campaigners on different sides of the Brexit divide in Britain are expected to go into overdrive to fight their respective corners.