The U.S. debate over restrictions intensified on Monday with large groups of protesters around the country pushing for easing social-distancing restrictions, while medical workers and health experts warned that lifting them too soon risked unleashing a greater disaster. 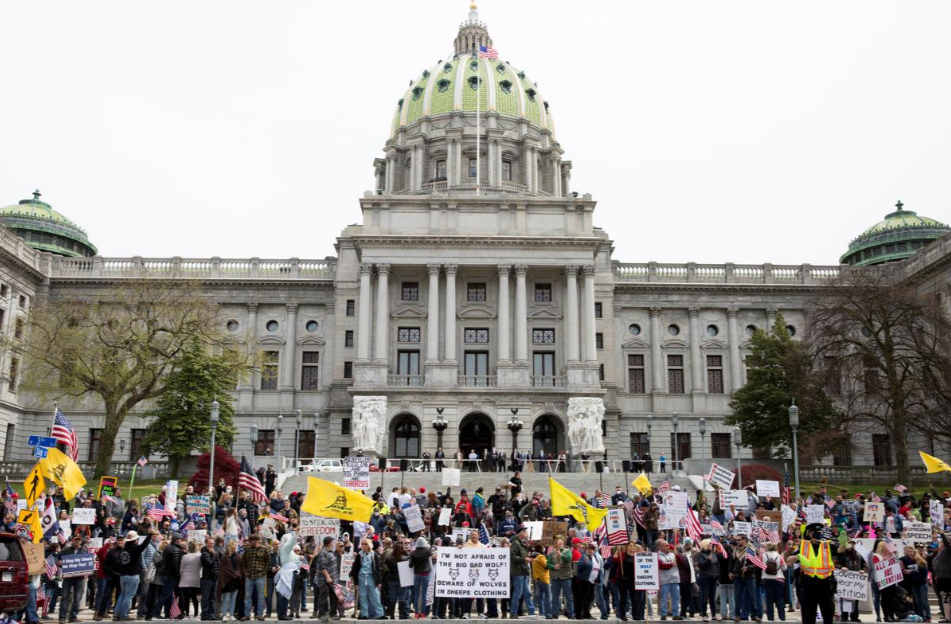 Stay-at-home orders and widespread business closures have stifled the U.S. economy and thrown at least 22 million people out of work, a level of unemployment not seen since the Great Depression of the 1930s. The economic damage has led to increasing agitation for relaxing social-distancing restrictions, especially as the rate of coronavirus hospitalizations and other indicators of the outbreak's severity have begun to level off in recent days.

In California, there have been protests in San Diego, Huntington Beach and San Clemente over the last few days, and several county officials have asked Governor Gavin Newsom to grant them the authority to implement a phased reopening of local economy.

Newsom said Monday that he understood the frustrations and anxieties being expressed by the protesters. But he cautioned that parts of the world that have relaxed coronavirus restrictions prematurely, including Singapore, have been quickly hit with a second wave of the virus.

In Pennsylvania, where Democratic Governor Tom Wolf has pledged to veto a bill in the Republican-led General Assembly that would force him to reopen some businesses, a few hundred demonstrators rallied in the capital city, Harrisburg. Many of the protesters expressed cynicism toward health experts and skepticism about the actual scale of the pandemic in the country, accusing political leaders of overreaching and taking actions that had caused more harm than the virus itself.

Others portrayed the stay-at-home measures in an altogether different light. Yetta Timothy, who was part of a counter-protest in Harrisburg, said the nursing home where she worked had lost an untold number of patients. "I just can't believe all of this is happening, that they want to go back to work."

Over the last week, including the street protests, online anti-stay-home protests have also emerged.  Facebook now is taking down some event pages promoting controversial anti-stay-at-home protests, after being criticized for allowing people to coordinate anti-quarantine protests on its platform, which public health officials, state officials and healthcare workers say are putting people's lives at risk.

President Donald Trump, a Republican whose re-election bid has been overshadowed by the pandemic, has criticized Democratic governors in several electoral swing states as going too far with their stay-at-home orders, amplifying a message touted by his political supporters in a series of street protests across the country.

In Washington, lawmakers were squabbling over a possible 450 billion-plus U.S. dollars deal to provide more aid to small businesses and hospitals hurt by the crisis. Republican Senate Majority Leader Mitch McConnell said a vote could take place on Tuesday.

Congress last month passed a 2.3-trillion-U.S.-dollar aid package that included a small-business loan program. The Trump administration wants to add 250 billion U.S. dollars to that now-depleted program, while Democrats have pushed for including funding for state and municipal governments and food aid for the poor.

Health experts and lawmakers on the front lines of the battle to curb the pandemic have said the United States could face a second and even deadlier wave of infections if the lockdowns end prematurely.

The United States has by far the world's largest number of confirmed cases of COVID-19, the highly contagious lung disease caused by the coronavirus, with more than 760,000 known infections and over 41,100 deaths, nearly half of them in the state of New York, according to a Reuters tally.

Dr. Anthony Fauci, head of the National Institute of Allergy and Infectious Diseases, told ABC News there would be no real economic recovery until authorities got the virus under control and that jumping the gun could lead to a big spike in cases.

"It's going to backfire, that's the problem," he said.

New York Governor Andrew Cuomo said reopening the economy must be calibrated carefully to prevent another surge in cases.

"We need to get testing up to scale," Cuomo said, adding that he was aware that some people were unhappy that they had to wear masks or engage in social distancing. "It's not a question of happy - it's a question of life and death."

Earlier, New York City Mayor Bill de Blasio said it could take weeks if not months before the country's most populous city reopens, because of a lack of widespread testing to determine the full scope of the outbreak and how many people may have developed immunity to the virus.

Trump has insisted the country has sufficient COVID-19 testing capacity.

In a series of tweets on Monday, Trump said governors had shifted from sounding the alarm about a scarcity of ventilators to dire warnings about lacking what they needed to ramp up testing, accusing them of "playing a very dangerous political game."

Federal guidelines issued by Trump last week for reopening the economy calls for a state to record 14 days of declining case numbers before moving ahead with a phased-in relaxation of restrictions. States must also first implement a rigorous program of testing and contract tracing for infectious individuals.