As Roe v. Wade overturned, Americans take to the streets 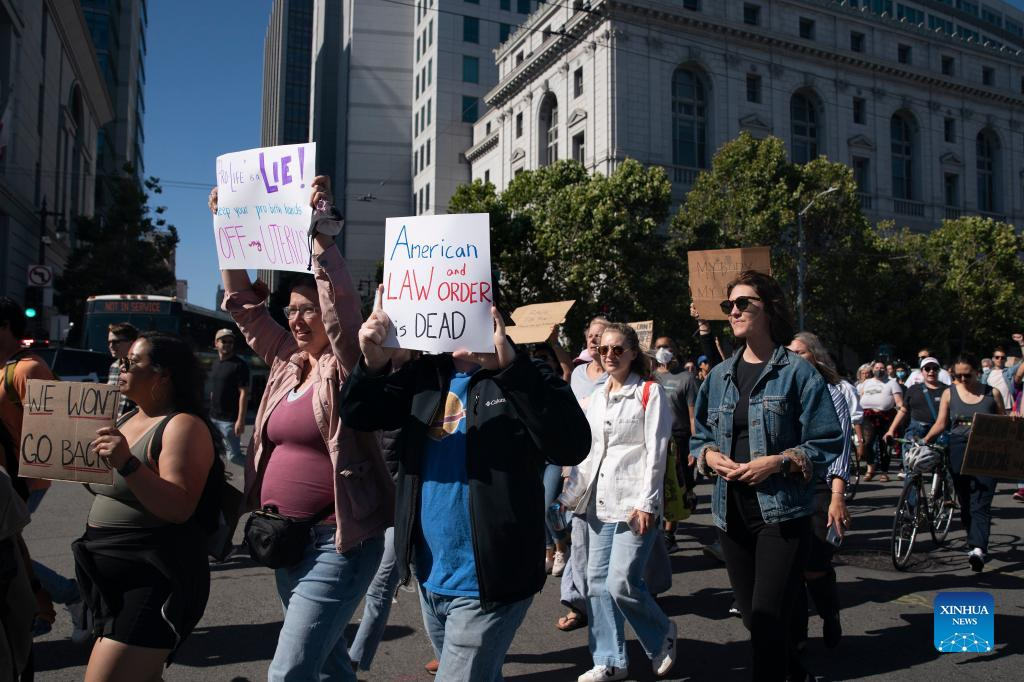 Demonstrators protest against the Supreme Court's overturning of the Roe vs. Wade abortion-rights ruling in San Francisco, California, the United States, on June 24, 2022. (Photo: Xinhua)

NEW YORK, June 25 (Xinhua) -- As the U.S. Supreme Court overturned Roe v. Wade, a 1973 landmark decision that established a constitutional right to abortion, a wave of protests and outrage is sweeping the country.

"Every person, every woman should have that choice, like it's really an attack on human rights itself," said Adriana Gonzales, a sophomore in New York City, as thousands of New Yorkers took to the streets around Union Square in Manhattan on Friday evening.

Though the latest 6-3 ruling doesn't outlaw abortion but leaves the decision to states, 26 states are "certain or likely to ban abortion," while 16 states, including New York State, provide protection for abortion rights in law or in their constitutions, according to the Pew Charitable Trusts.

About half of states are expected to pass abortion bans of "varying severity," the Associated Press reported Saturday.

The ruling is "an attack on women's rights. And if women's health is threatened, the entire society is threatened," said Sheryl Nelson, a resident in New York City.

Gonzales said the ruling would affect her future if she doesn't have the right to get an abortion, and she could get killed due to pregnancy.

"People have died before and they will continue to die because of this decision," said Reven, another resident who did not give a full name.

New York State Governor Kathy Hochul said in a statement on Friday that the decision is "a grave injustice" and "the right to reproductive healthcare is a fundamental human right."

In Los Angeles, carrying signs that read "my body, my choice" and "reproductive rights are human rights," protesters gathered at a park near the city hall and marched through downtown on Saturday afternoon.

Becca Waite, a female activist from Rise Up 4 Abortion Rights, told Xinhua that organizers of the rallies on Friday and Saturday hoped the protest would be bigger and bigger to let lawmakers know that American women would not accept the ruling and would not sit back while they decide their fate.

Hours after the ruling was released Friday, thousands in Southern California took to the streets from noon to midnight -- in downtown Los Angeles, Hollywood, Westwood, West Hollywood, Long Beach, Fullerton, Irvine and other cities.

"It's heartbreaking, it's hard to believe it has come down to this," said Julie Thompson, holding a sign that read "A Sad Day," along with other signs held by protesters including "Keep the Government Off My Body" and "Thanks Trump, Another Disaster!"

Across Colorado, in Longmont, Fort Collins, Colorado Springs, Littleton, Durango and other towns, protesters took to the streets to reject the decision opposed by nearly 70 percent Americans, according to polls.

A sanctuary for women desiring an abortion in America's West with the state legislature codifying a woman's abortion right signed into law in April, Colorado, surrounded by a majority of conservative states, has seen an all-time high in the number of people receiving abortions in 2021, according to the Colorado Department of Public Health and Environment.

Protesters also expected the politically motivated ruling to further divide the country ahead of mid-term elections in November.

"A very minority group has taken control," said Reven, believing the ruling was driven by money and political considerations.

"Politics came before people at the highest court in the land, and, as a result, the health of our nation now hangs in jeopardy. What the court has done today ignores the opinions of the majority of Americans, as it helps states control women's bodies, their choices, and their freedoms," New York City Mayor Eric Adams said in a statement on Friday.

Many entertainment industry professionals and companies have also voiced opposition to the decision.

Singer-songwriter Taylor Swift tweeted: "I'm absolutely terrified that this is where we are -- that after so many decades of people fighting for women's rights to their own bodies, today's decision has stripped us of that."

Pop icon Mariah Carey lamented: "It is truly unfathomable and disheartening to have to try to explain to my 11-year-old daughter why we live in a world where women's rights are disintegrating in front of our eyes."

"Comfort to every human being who feels afraid right now. I feel afraid too," Glennon Doyle, author of The New York Times bestseller "Untamed," said.

Many Hollywood studios and networks are taking action to lessen the impact of the ruling. Groups like Disney, Paramount, Warner Brothers, Netflix, Comcast, Discovery, Sony, Meta and others have committed to covering travel costs for employees seeking abortions.

The overturning of Roe v. Wade also drew criticism from United Nations High Commissioner for Human Rights Michelle Bachelet, who described the decision as "a huge blow to women's human rights and gender equality," and Canadian Prime Minister Justin Trudeau, who said "the news coming out of the United States is horrific."