WORLD As storm edges away, officials warn Hawaii is 'not out of the woods yet'

As storm edges away, officials warn Hawaii is 'not out of the woods yet' 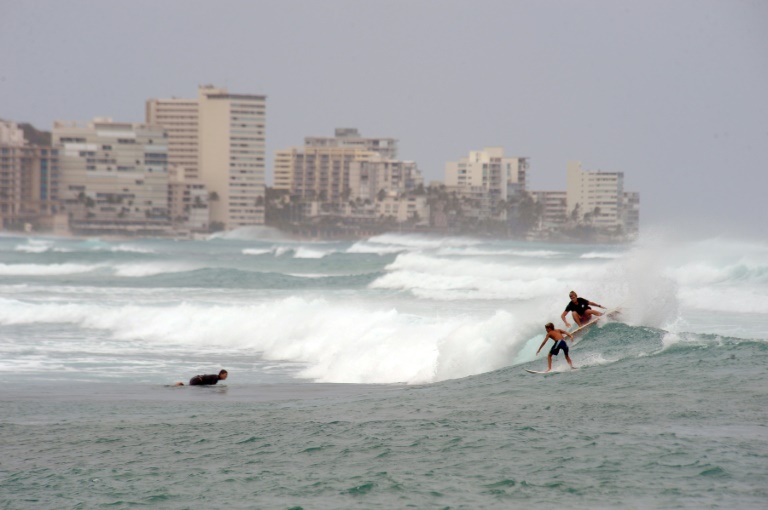 Torrential rain continued to pound Hawaii from Tropical Storm Lane, as officials warned Saturday that a foot or more of precipitation was still possible and cautioned that "we are not out of the woods yet."

The storm, which was earlier downgraded from a hurricane, was sitting nearly stationary about 130 miles (210 kilometers) south-southwest of capital city Honolulu, with maximum sustained winds of 65 miles per hour, just short of hurricane force.

It was expected to pass south of the islands of Kauai and Niihau later Saturday as it moves gradually to the west and away from Hawaii, according to the Pacific Hurricane Center.

The storm's outer bands continued to dump enough rain to trigger landslides -- several of which blocked the main island's Highway 19, a major thoroughfare -- and causing severe flooding in many areas.

Officials from the Federal Emergency Management Agency said in a telephone briefing Saturday that even after Lane passes, wet conditions will continue through much of next week, bringing up to 10 inches (25 centimeters) of additional rain in already saturated lower areas and twice that much at higher elevations.

So while emergency planners pointed on Saturday to some positive metrics -- anticipated large-scale power outages had not materialized, food and water supplies remained sufficient, and the number of people staying in emergency shelters had declined overnight -- they urged Hawaiians to remain cautious.

"Today's message to the citizens of Hawaii is, don't let your guard down," said FEMA Administrator Brock Long.

Another top FEMA official, Jeffrey Byard, echoed that, saying, "We are not out of the woods yet, far from it."

Heavy rain from the slow-moving storm "will continue to impact the Hawaiian islands into the weekend, leading to catastrophic and life-threatening flash flooding and landslides," the National Weather Center said.

Brad Kieserman with the American Red Cross told reporters on a conference call that 1,100 people had sheltered overnight in 45 evacuation centers. That was down from 2,000 the night before.

He had feared worse, and he called the decline a positive sign.

But Vice Admiral Daniel Abel of the US Coast Guard warned that, with widespread flooding and surf up to 14 feet, conditions remain hazardous. 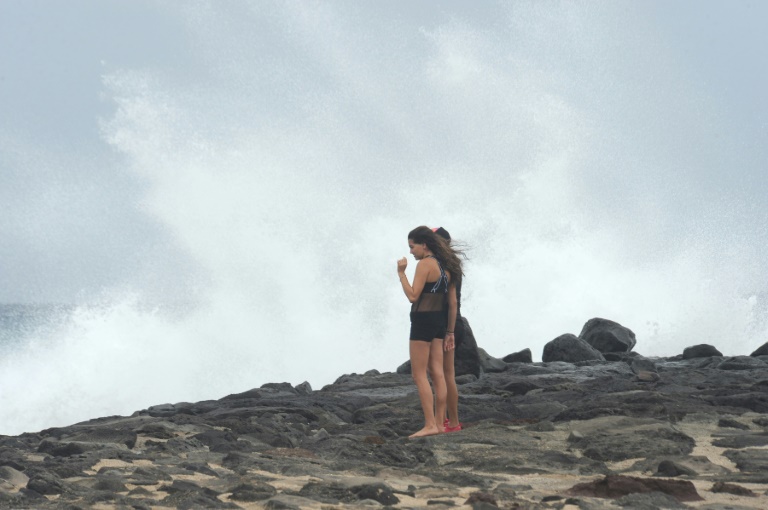 Almost 25 inches (60 centimeters) of rain fell on the iconic Waikiki Beach in the last 36 hours, forcing its closure as hoteliers and store owners piled sandbags outside their businesses.

The mainly rural Big Island -- home to the still-erupting Kilauea Volcano -- has taken the worst hit so far, with more than 30 inches of rain in about 24 hours.

Lane should have little effect on the eruption "aside from minor rockfalls at the summit and increased steaming" from two vents, the US Geological Survey said.

However "whiteout conditions could occur... due to steam produced by heavy rain falling on still-hot lava flows."

United, Alaska and Hawaiian Airlines have canceled some or all international and domestic flights.

The last major storm to strike Hawaii was nearly three decades ago, when Hurricane Iniki hit the island of Kauai, leaving six dead and causing billions of dollars in damage.

Federal officials have worked with Hawaiian utility managers to monitor the power grid, a major vulnerability in Puerto Rico last year when it was hit by Hurricane Maria, a powerful Category Four hurricane.

Hurricane-related deaths in Puerto Rico have been estimated at as many as 4,600 people, largely because prolonged and widespread power outages and washed out roads prevented access to health care, US researchers said.