As third wave rages, show goes on at Sofia opera

With an orchestra spread out across the entire parterre, audiences limited to the balconies, and no breaks but plenty of disinfectant, the Sofia Opera is one of the few music venues still hosting live performances in Europe. 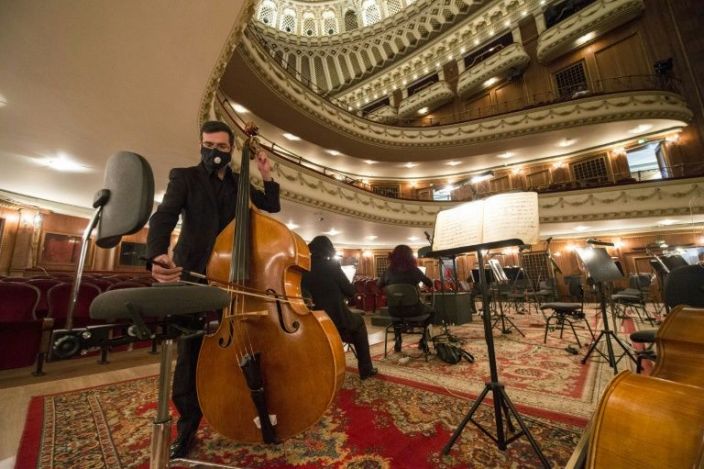 Across the continent, a third wave of Covid-19 infections is keeping opera houses and other cultural venues closed -- loud singing poses a particular risk as the virus spreads through droplets -- but in Bulgaria, classical music plays on, from "Tosca" to "La Traviata".

"I am hungry for music. And the risk, why think about it? It's not riskier here than in the supermarket or the subway," says 81-year-old Petya Petkova, who attended Verdi's "La Traviata" with her daughter last week.

Despite the disinfectant, social-distancing and staff taking people's temperature, a festive spirit reigns at the historic opera house in the Bulgarian capital, a stark contrast to its silenced counterparts in Paris, Vienna or Milan.

Bulgaria first eased pandemic restrictions in June and allowed operas, concert halls and cinemas to reopen at 30 percent capacity, leading the Sofia Opera to arrange plastic and fabric flower bouquets as placeholders on the majority of the crimson plush seats.

"We perform in front of 250 spectators, but it's better than not playing or performing," Sofia Opera director Plamen Kartaloff says.

Even as Europe struggles with a third wave of infections, in part due to a number of mutations that spread more easily, Kartaloff expects the opera to remain open.

Tragedy has touched the operatic community, and not just on stage: In November, Bulgarian tenor Kamen Chanev died of Covid-19, three weeks after he debuted Otello in the central Bulgarian city of Stara Zagora.

"That's the risk of this profession -- it holds us like a drug, it's stronger than fear," Momekova says.

For American conductor Evan-Alexis Christ, who saw his performances in Germany cancelled, bringing "La Traviata" to the stage feels rewarding, despite a number of "acoustic challenges".

From the pit, the orchestra had to move to the parterre, where musicians now sit far apart from one another. The singers on stage are even farther away.

"We are acoustically louder for the audience than normal so the orchestra has to play very quietly and listen even more to the singers," Christ says.

"But overall I think everyone is very happy, also the musicians and the singers who are able to perform," he adds, praising the discipline of the musicians, who, with the exception of singers and tube instruments, perform with face masks on.

To Christ, the opera in Sofia and in Madrid, which has also kept its doors open, are proof that it's still possible to play for a live audience.

"My feeling is that people are incredibly hungry, they want to hear music," Christ says, adding that he hopes "to make a difference" for the 250 people in the audience that night.

Thanks to Kartaloff's ingenuity, the Sofia Opera has found a number of ways to perform amid the pandemic: "Swan Lake" was staged on the pontoon of a lake near Sofia, while other operas reverberated through an old Roman fortress.

Some musical theatre performances were limited to adults with children, a way to focus on the audience of the future, Kartaloff says.

As clubs and bars have mostly remained closed, Bulgaria's opera halls have become more alluring to younger audiences, including students who put on their prom suits to see "La Traviata".

"It's a huge pleasure to have the chance to attend a nice event such as the opera," 38-year-old Nikolay Onufriev, who's only been to the opera once before, says.

"It's a way to escape from the grey, everyday life that we have amid the coronavirus pandemic, and for me, this is something big."